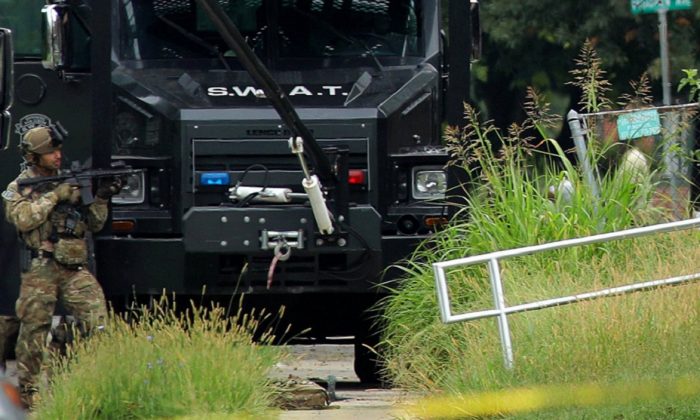 A police officer in tactical gear stands positioned near an Illinois State Police S.W.A.T. vehicle outside a building on 42nd Street near Van Buren Avenue,in East St. Louis, Ill., after a state trooper was shot while serving a warrant at the address on Aug 23, 2019. (Christian Gooden/St. Louis Post-Dispatch via AP)
US News

Trooper Nicholas Hopkins, 33, of Waterloo, a 10-year veteran of the force, was wounded during an exchange of gunfire while serving the warrant at an East St. Louis home, said State Police Acting Director Brendan Kelly. He later died at a hospital.

After the shooting, police surrounded the home and arrested three people. Police remained on the scene throughout the day, uncertain if another suspect was barricaded in the house, according to authorities. The three people arrested were not identified.

Police didn’t say if anyone else was shot, nor have they revealed the issues addressed in the search warrant.

Waterloo Mayor Tom Smith says Hopkins was married and the father of 4-year-old twins and an infant daughter.

“It is nearly impossible to express the depth of my sadness and my condolences to the entire Hopkins’ family and his friends and the Illinois State Police family,” Kelly said. “I give my thanks to troopers who performed CPR for an extended period on their fellow trooper to sustain their brother’s life so that his family could see him one last time.”

In a statement following the shooting, Illinois Gov. J.B. Pritzker noted state troopers display unbelievable courage and “put their lives on the line for us every single day.”

“Please keep them in your thoughts and prayers during this dangerous, active situation in East St. Louis and every day,” he said.

U.S. attorney for the Southern District of Illinois Steve Weinhoeft says the area where the shooting of Hopkins occurred is “particularly dangerous.”

“He [Hopkins] was trying to make that community safer for every man, woman, and child,” Weinhoeft said.

The shooting Friday was the latest of law enforcement officers while attempting to serve a warrant, and the second of an Illinois State trooper this month.

A Philadelphia man who barricaded himself in a house is charged with attempted murder for the Aug. 14 shooting of six police officers.

Maurice Hill, 36, is accused of shooting at officers who were serving a drug warrant and then keeping police at bay while he fired from inside a building. The six officers were released after being treated at hospitals. Four other men are charged with drug offenses.

A suburban Chicago man has been charged with attempted murder for shooting and wounding an Illinois state trooper who was serving a warrant at the man’s home.

The wounded trooper was with other officers attempting to serve the warrant Aug. 15 at the home of Volodymyr Dragan, 43, of Wheeling when someone inside fired shots, striking a trooper in the arm. Dragan is being held without bond.

The officer was taken to a nearby hospital with injuries that weren’t life-threatening.

Illinois State Police has also suffered an unusual number of fatalities this year with the deaths of three troopers.

Troopers Christopher Lambert, in January, and Brooke Jones-Story, in March, were struck by vehicles. Trooper Gerald Ellis died in an automobile crash in March.