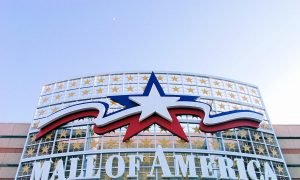 A 2-year-old Illinois girl died after a section of a store display fell at Orland Square Mall in Orland Park and hit her on the head.

Fire officials cited by ABC7 said the tragic incident took place inside the Akira store on the afternoon of Tuesday, Aug. 27.

Orland Park Police cited by the Chicago Tribune said officers and paramedics responded to the store just before 2 p.m. in response to a call that a toddler had been injured.

The Tribune cited Orland Fire Protection District spokesman Ray Hanania as saying the child had been at the mall with her aunt when a part of the display structure fell on her, causing a serious head injury.

It was not immediately clear what caused the store display to fall.

According to ABC7, a doctor and nurse happened to be present at the store and helped treat the girl until paramedics arrived. The little girl was transported to Christ Medical Center in Oak Lawn where she later died.

ABC7 published transcripts from calls made to 911 dispatch from the scene of the tragedy.

“We’re getting numerous calls about a large metal object falling on a baby at Akira in the mall,” one dispatcher said.

“We’re still on the phone with a caller,” another dispatcher said. “They’re advising they’re doing CPR on a child. A mirror fell on them.”

Akira, a Chicago-based chain of clothing stores, issued a statement in the wake of the child’s death.

“We are devastated by this tragic event. We are working to collect all the information,” said Eric Hsueh, Akira co-owner, according to WGN-TV.

A mall spokesperson was cited by CBS Chicago as saying, “Our deepest sympathies go out to the family of the child.”

The incident follows a development in the case of a 5-year-old boy who left intensive care on Aug. 1 after earlier being thrown from the balcony of a Minnesota shopping mall.

After spending more than three months in intensive care, 5-year-old Landen Hoffman is now on the road to recovery, his family confirmed.

“We are happy to report that our son is no longer in intensive care and has been moved to an inpatient, physical rehab program at another hospital to help him continue to heal and focus on the next phase of his recovery,” family spokesperson Noah Hanneman said on Gofundme.

JUST IN: Boy thrown at Mall of America now out of intensive care https://t.co/2n9MmkMHd1

The Associated Press revealed Hoffman had more than 15 surgical procedures after he suffered two broken arms, a broken leg, facial and skull fractures, and injuries to his spleen from hitting the ground from nearly 40 feet above at the Mall of America in Bloomington, 10 miles south of downtown Minneapolis.

“He had a stent placed in a vein that runs through his liver because of the serious complications he continues to endure,” Hanneman said.

A 5-year-old boy who was thrown from a third-floor balcony at the Mall of America near Minneapolis remains hospitalized with serious injuries. https://t.co/G7ShmQN294

Aranda previously confessed that he was “looking for someone to kill” after women had rejected his advances, so he randomly tossed Hoffman off the mall’s third-floor balcony back on April 12, according to AP.

The family has forgiven Aranda for hurting Hoffman and said he failed to remove the joy in their lives.

“I want you to know I forgive you, not because what you did was okay, not because I want to, but because God wants me to,” the mother said, according to the family’s impact statement on Gofundme. “I’m not letting you take any part of our family, you’re not taking our love, our joy, our peace … I refuse to be full of anger and hatred, I refuse to let you take my joy.”

The family revealed on Gofundme there is still much “hard work” to be done before Hoffman can lead a normal life.

“Our beautiful boy has endured much already but he is strong and his spirit remains vibrant,” Hanneman said. “It has been so hard for our young son and our family.”

There has been an overwhelming show of generosity for the child’s speedy recovery, with more than $1 million already donated to help cover what the family called “immense” medical and rehabilitation costs.

“We continue to be eternally grateful for every prayer, every act of kindness, and the love this world has shown us throughout this journey,” Hanneman said.

The Associated Press and Richard Szabo contributed to this report.