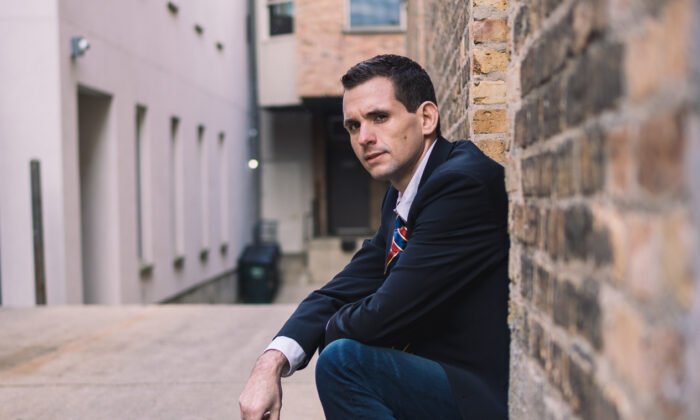 Frank McCormick, a high school history teacher in a Democratic-leaning Chicago suburb, has voiced his views about Critical Race Theory (CRT) at his school district for six months. The mental toll has worn him down.

He realized that the loneliness, the personal attacks from all directions, and the constant fear of losing his job are the very things keeping many others quiet about the issue, including, at one time, himself.

When the burden was such that he wanted to simply shut up and give up, a small group of like-minded teachers in other parts of the country carried him through.

“There is nothing of value that does not come at a cost—even if my career at the district ended, it would have ended with me trying to do something right,” McCormick told The Epoch Times.

McCormick’s grandfather immigrated to the United States during World War II and joined the U.S. Army to fight for his new home country. From his grandfather, McCormick learned to not be quiet, to challenge, to fight back, and to do what was right, he said.

So on Dec. 31, he wrote down his New Year’s resolution: to speak freely, to speak unapologetically, and to support those that do the same.

The catalyst for his speaking out came after the death of George Floyd in 2020, when ideological agenda accelerated in the Waukegan public school district at a rate he hadn’t seen in nearly a decade, he said.

Suddenly everybody was taking on white privilege or systematic racism as the biggest education ills, he said. Teachers were trained to identify racial oppression at professional development sessions, and students were taught to view their world through a lens of race and conflict.

McCormick wanted to know where these ideologies came from, so he bought books and settled down to read.

“I was like, ‘Oh, Critical Race Theory, this is where my school district is getting these ideas.’ They kind of infiltrated into academia at the college level, and then found their way down into the K-12 school system,” he said.

To McCormick’s knowledge, CRT rests on two foundations: racism is the norm in America, and that almost all American institutions, including public schools, are inherently racist.

As he looked around, he could find traces of the theory all about him in the school district. It did not explicitly display itself; rather, it was disguised under programs or curriculums involving concepts like culturally relevant teaching, restorative justice, diversity, equity, and inclusion, he said.

The Epoch Times reached out to Waukegan public school district for comment on McCormick’s claims about CRT but did not receive a reply by press time.

“From what I’ve seen, when people buy into these ideologies, they become very consumed by them—it is almost like a religious system. When our young people are taught these things as truth, they lose the ability to question,” he said.

The Socratic method of questioning was something that McCormick had always wanted to pass on to students since he began as a public-school teacher in 2010.

“I notice that students are picking up on the language, picking up on the ideas, ‘Hey isn’t our society systematic racist?’  ‘Don’t you have white privilege?’ But they don’t know what they mean and these ideas are shaping their world views in a way I see as harmful and conflict-oriented. It creates unhappiness. It is cynical,” McCormick said.

Once again, McCormick felt a desire to call it like it is.

He had that desire before. Not long after he became a teacher, he found bureaucracy and complacency had hurt academic excellence, he said. He pointed out problems, proposed changes, and was told to shut up or lose his job. So McCormick shut up.

Now it was the harmful educational ideologies that overtook and hurt academic excellence, he said. Due to the pandemic, McCormick was working from home, away from the hectic environment of school. That gave him room to contemplate, he said.

“What kind of future my son and his generation would inherit from me? For the first time in as long as I can remember, it is not for my survival, but that of others,” he said.

McCormick started to publicly expose what he saw as CRT at his school district in July 2021.

He published long-form expose articles on his blog. He pushed out bite-sized opinions on Twitter and Facebook. He talked to reporters and anchors. He wanted to wake more people up to what’s going on at public schools and join his fight against the harmful ideological agenda, he said.

Criticisms soon came, from his colleagues, his administrators, his union representatives, and his friends. McCormick would defend himself with reason and logic, he said.

But it was the personal attacks that really got to McCormick, such as when a teacher threatened to disclose McCormick’s once having depression to paint him as mentally ill, he said.

At such times, he would turn to the writings of Aurelius, who he thinks was the most grounded Roman philosopher and full of practical advice about being a moral person in the real world—such as his advice about accepting pain and letting go of desires to change things beyond one’s control.

“So I shrug my shoulders and say, ‘Yeah, I have had depression.’ I just come forward and talk about it and take that power away from them to threaten me,” McCormick said.

He also got support from a small network of teachers or former teachers who also exposed CRT at their schools and bore similar pressures, such as Tony Kinnett from Indiana, Paul Rossi from New York, and Ramona Bessinger from Rhode Island.

Both Kinnett and Rossi were fired by their schools.

On Dec. 8,  McCormick was called by school district administrators to an administrative meeting. He was given the Illinois Educator Code of Ethics to review and advised to be mindful of the negative impact his actions might have on the students and community, which could imperil his career, he said.

He doesn’t know how long he can hang on before his district fires him or before he resigns under pressure, he said. But he does know he wants to fight for a little bit longer to wake up more teachers, parents, and community members, he said.

“What I’ve wanted is for more teachers to speak out. It can’t just be me and it is bigger than one person. I know this is a personal decision and there are a lot of risks with it, but I hope enough people can speak out and then we can change things—or at least we afford teachers some cover for not toeing this ideological line,” he said.

So far no other district teachers have followed McCormick to speak out on CRT, though a few told him in private that they supported his views, he said.

Several of his former students also showed support. One told him in a text message, “So privileged to have had you as a teacher. You are one of a few teachers that have left an impact on me, and I am forever grateful for your opinions and conversations over the years.

In his history class, McCormick offers alternatives to ideologies in the school curriculum to encourage the students to think for themselves. He said he doesn’t bring his own political views into the classroom.

McCormick shared the text message on his Twitter account and wrote, “I expected to be labeled enemy, white supremacist, and crazy. I didn’t expect an overwhelming show of support from former students. They are all black or brown, and I had worried they would believe the lie that my stand against indoctrination is rooted in racism.”