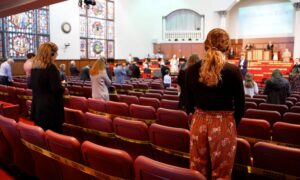 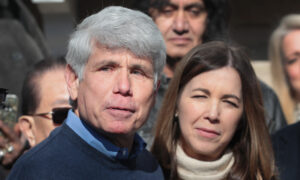 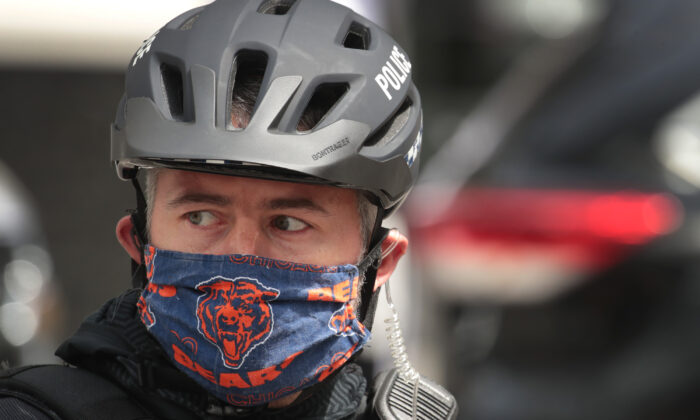 A police officer keeps watch as demonstrators gather outside of the Thompson Center to protest restrictions instituted by Illinois Governor J.B. Pritzker in an attempt to curtail the spread of the CCP virus in Chicago, Illinois on May 1, 2020. (Scott Olson/Getty Images)
AMERICA

“No individual will be arrested or taken to jail for a violation of the Executive Orders or emergency rules,” the Illinois State Police said in a statement.

Officers are focusing on urging voluntary compliance with the orders and will not issue criminal misdemeanor penalties against individuals for violation of the orders or rules.

But officers may apply the rules to corporations, LLPs, or other business entities, the statement continued.

“We encourage all citizens to continue to do their part to maintain public health as we move forward in the days ahead with Reopening Illinois,” police added.

Pritzker, a Democrat, filed emergency rules last week that make opening a business against his orders a class A misdemeanor.

Violators could be fined up to $2,500 and receive up to one year of jail time.

State officials compared the possible citation to getting a traffic ticket and said no one would get arrested, though a court appearance would be required.

“It will be a dark day in Illinois when we charge small businesses with a jailable crime for salvaging their livelihoods.” House Republican Leader Jim Durkin said in a statement.

The 12-person Joint Committee on Administrative Rules was set to vote on whether to block the new rules, but Pritzker withdrew them before a vote could happen.

Staff from the Illinois Department of Public Health, according to the Journal Star, told the committee that the order was withdrawn.