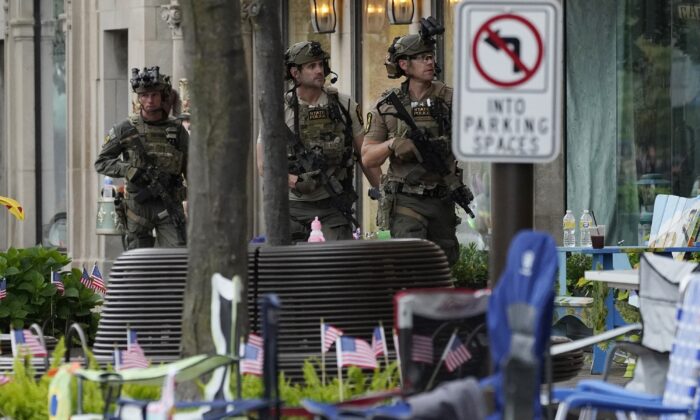 Police in the Chicago-area suburb of Highland Park said the suspect in Monday’s mass shooting that left seven dead wore women’s clothing to blend into a crowd after the incident while revealing that he plotted the attack for weeks.

Authorities detained Robert Crimo III, 22, as the prime person of interest in the shooting at a Fourth of July parade, which left seven people dead.

On Tuesday, Deputy Chief Christopher Covelli, a spokesperson for the Lake County Sheriff’s Office, told reporters that Crimo wore the female clothes as investigators believed that he was attempting to hide his facial tattoos and identity.

They said he fired on a crowd of people from a roof before exiting, dropping his rifle, and attempted to blend into the crowd as he tried to escape, Covelli said. Crimo then walked to his mother’s home and took her vehicle.

“He walked to his mother’s home, who lived in the area, and blended right in with everyone else as they were running around … almost as [if] he was an innocent spectator as well. He borrowed his mother’s vehicle,” Covelli told reporters.

A second rifle was also found in the vehicle, the police spokesman said. A motive has not yet been determined in the case, but authorities say that he was allegedly plotting the shooting for weeks.

“At this point, we have not developed a motive from him. Investigators are very much furthering the investigation. They have been in discussions with him; I don’t have anything to say about motivation thus far because it hasn’t been provided,” Covelli said.

At the current stage of the investigation, officials “do believe Crimo pre-planned this attack for several weeks,” he added.

There were also no indications that Crimo had an accomplice, Covelli said, saying he likely acted alone. Authorities had no prior interactions with the suspect before Monday’s incident, another top official said.

“We literally have nothing on him,” Highland Police Chief Dave Wentz told reporters, adding that the department had contact with him when he was a juvenile. “He was not potentially involved in anything. He was present for something non-criminal.”

The suspect’s uncle, Paul Crimo, told CNN Tuesday that his nephew appeared to be acting normally on Sunday night—hours before the shooting.

“I’m heartbroken. I’m so heartbroken. There were no signs that I saw that would make him do this. He’s a quiet kid. He’s usually on his own. He’s a lonely, quiet person. He keeps everything to himself,” he said.

Highland Park Police Chief Lou Jogmen said a police officer pulled over Robert Crimo about 5 miles north of the shooting scene, several hours after police released the man’s photo and warned that he was likely armed and dangerous.

Crimo, who goes by the name Bobby, was an aspiring rapper with the stage name Awake the Rapper, posting on social media dozens of videos and songs, some ominous and violent.

In one animated video since taken down by YouTube, Crimo raps about armies “walking in darkness” as a drawing appears of a man pointing a rifle, a body on the ground, and another figure with hands up in the distance.