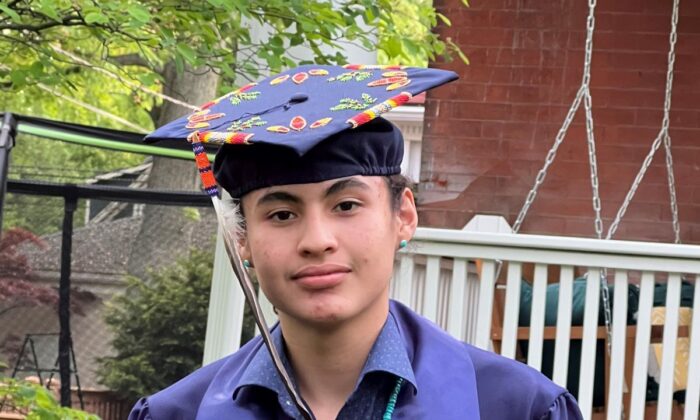 Nimkii Curley, a senior at Evanston Township High School in Ill., was denied the opportunity to walk with his class because he refused to remove religious decorations honoring his Native American heritage from his graduation regalia. (Courtesy of Megan Bang)
Education & Family News

Nimkii Curley grew up hearing the stories of his grandparents and great grandparents, all survivors of the Federal Indian boarding school system which purposely erased Native American culture in generations of children, spanning 150 years, in an effort to take Native American land.

His Navajo grandfather, 90, lives with Curley, 17, and his parents and siblings, in their Evanston, Illinois home. Curley has tribal affiliation with the Turtle Clan Ojibwe Anishinaabe and the Navajo Dene Black Sheep Salt Clan. He was raised to understand, appreciate, and live in his culture, including its spiritual traditions. That is why he was so honored when, for high school graduation, he received gifts from his community, including beads to decorate his cap, traditional flowers for his stole, and most special, an eagle feather which he hung where the cap tassel would be.

“It’s a really sacred thing,” Curley said of the feather.

Evanston Township High School (ETHS) told students that additional apparel or adornment on caps and gowns is not permitted during the graduation ceremony, a school representative told The Epoch Times. Curley felt his items fell into a different category.

“I was aware of that, and I already had these gifts made for me from the community,” Curley told The Epoch Times. “I thought that it’s within my religious freedom to wear them. At least the feather. The other stuff that I had, not so much. But it seems like people are wearing crucifixes. I thought that maybe I could bring my feather.”

At the graduation ceremony on Sunday, he was pulled out of line by an event coordinator and told he would not be able to walk onto the stage to get his diploma. He accepted that but assumed he would get to sit with his classmates one last time, so he got back into line.
Then he was told again, this time with more insistence, that he could not wear his adornments and they pushed for him to remove his feathered cap and wear a plain cap and stole, Curley said.

“They didn’t understand, in that moment. You have to allow people to have grace in those kinds of situations,” Curley said, noting that he is not angry with the school or security that handled the situation. He understands they were not trying to be harmful, and neither was he. “I was offered the option to sit on the sidelines at the top of the second floor, in the bleachers, in the very back.”

His family sat with him in the stands, and they watched the graduation speeches, until he decided to leave, at some point after they started calling names and handing out diplomas.

Because of its proximity to Chicago, the school has mascots of the Chicago Blackhawks around its buildings. It is an Indian head with a painted face and four feathers in his hair. Curley tried but failed to get the mascot banned from the school.

“The fact that racist Blackhawks mascots are allowed in my school, but I’m not allowed to be who I am on graduation day, that is anti-indigenous,” Curley said. “It’s socially acceptable to be racist against Native Americans in a way that’s unique. We don’t want to play the ‘oppression Olympics’ for sure, but it is unique.”

“My grandfather speaks Navajo fluently. He is a boarding school survivor and because of that, I don’t know my native language and my dad doesn’t know it. My dad never was given the option to learn,” Curley said. “My dad was forced out of high school, so I was going to be the one to graduate for him and for my grandfather. But that will have to wait for the next generation.”

The day after graduation, the principal and superintendent went to Curley’s home, gave him his diploma, and apologized.

“They said they were with me and they give promises and it’s really important to see them follow through. It’s a nice gesture that they came to give me my diploma, but it’s up to them to deliver on the promises.”

Curley says the school promised to ban Blackhawks mascots in the school and they promised that next year, all students would be able to represent their heritage and their identity.

The Epoch Times asked the school about those promises specifically but it did not confirm them. It is possible a school board meeting may be needed to decide such policy.

“We are taking the opportunity to examine our past practices. ETHS is reviewing the graduation guidelines, particularly as they relate to acknowledging the history and stories of indigenous students, and we will let students and families know when there are changes in the future,” the school said in an email.

Next, Curley will attend the University of Wisconsin, Madison to study environmental engineering.