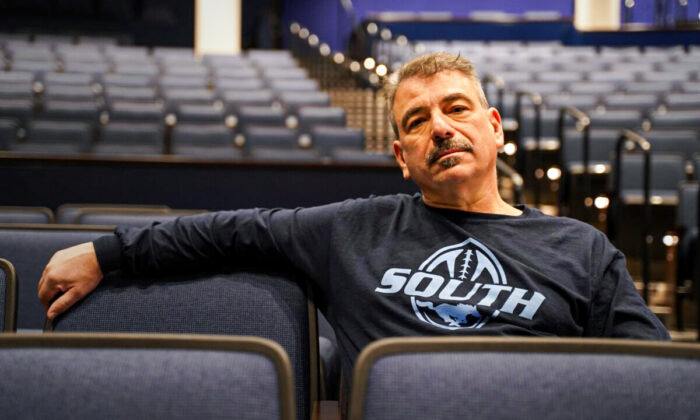 Terry Newsome, dressed in a Downers Grove South High School spirit wear, sits in the school auditorium where he spoke up about the book "Gender Queer" last month, in Downers Grove, Ill., on Dec. 13, 2021. (Cara Ding/The Epoch Times)
US News

DOWNERS GROVE, Ill.—Terry Newsome, a father of two high school freshmen in a Democratic-leaning Chicago suburb, was never into local school board meetings. That is, until five months ago.

Newsome was busy working as an associate vice president at a global information services provider. He was also fighting two cancers, one being stage-four prostate cancer.

After he survived that one, his Italian mother, a devout Catholic, said to him, “Well, son, you must be kept on this earth for something.”

About seven months ago, his then eighth-grader son came home from school and told Newsome: “Dad, my teacher just told us there is no American dream. It is not there for everybody, so it is not real.”

Newsome, a descendant of European immigrants who had lived the American dream, was shocked to hear that.

He called the principal and reached out to parents, which opened his eyes to what was going on at public schools.

“I’m like, ‘Oh my god.’ I already heard what happened in eighth grade, but it’s going to get worse in high school.”

He voiced his opinions on hot issues such as critical race theory and mask mandates. Soon he emerged as an unofficial spokesperson for a concerned group of mostly mothers.

“The moms are so happy to have an aggressive, type-A-personality father to join them. They had mostly fought this battle alone, against the giant system of public schools,” Newsome told The Epoch Times.

Weeks ago, Newsome and his group found themselves in a nationwide fight to ban from schools a comic book with graphic sex scenes.

Kobabe was often asked during book tours about the recommended ages of readers, and the answer was almost always, “High school and above.”

That is an opinion supported by School Library Journal, a premier national publican for librarians working with children and teens.

The publication puts out more than 6,000 reviews every year, and its 2019 review of Kobabe’s book reads, “A book to be savored rather than devoured, this memoir will resonate with teens.”

As more and more school libraries across the country opened doors to Kobabe’s books, a growing group of parents concerned with sexual content took on a fight to ban them from their children’s places of learning.

Challenging voices can be heard in New Jersey, Texas, and Ohio. Several school districts in Florida, Pennsylvania, and Alaska have banned the books at schools.

At Fairfax County in Northern Virginia, the epicenter for LGBTQ students’ issues, Kobabe’s books were pulled from but soon returned to school libraries.

At District 99, Kobabe’s books have also pushed more parents to step from the sidelines and join the fight, according to Christine Martin.

For years, Martin showed up at one school board meeting after another, questioning changes she didn’t like.

“Parents are finally stepping up to the podium to tell school boards, school administration, teachers, that what you are teaching within the school is not acceptable,” Martin told The Epoch Times.

“It is growing bigger and bigger. It is very grassroots.”

Newsome and several parents voiced their concerns about Kobabe’s books.

Both Proud Boys and Antifa members were there as well, according to parents present at the meeting. Antifa is a far-left, anarcho-communist network of people with a history of violence.

Antifa members took pictures of parents speaking out and posted them on their social media accounts.

One father, Jim DeVitt, received a threatening phone call from an unknown person days after.

That made Newsome’s wife very worried. She asked him: “Why do you have to do this? You’re putting us at risk.”

Newsome replied, “I really feel that we’re in a war for the future of our children in our country.”

Newsome said: “If everybody in America says, ‘Why me?’ we’re not going to have an America anymore.

“Think about those 18-year-olds that joined the military and fought for America. They came back in a wheelchair with no arms and legs, or they died. Well, why them?”

A week after the board meeting, Newsome and another parent sat down with school librarians and principals to discuss Kobabe’s books.

A Sit Down With Principals

According to the school board policy, any student, parent, or community member could request a reconsideration of instructional materials used in District 99.

On Newsome’s request form, in the section of reasons for objection, he wrote: “The book is child pornography. See photos. If any child sees this book, the result would be giving them access to child pornography.”

That was exactly what Newsome told library administrators and principals at the meeting.

Newsome said he wasn’t against books that depict teenagers who identify with uncommon gender identities. He said he just wasn’t comfortable with the sexual scenes in the books.

When Kim Pakowski, the library chairperson at District 99’s Downers Grove South High School, told Newsome she had no formal definition of child pornography, Newsome showed her a printout of a Merriam-Wester definition he had prepared, according to the official meeting minutes obtained by The Epoch Times.

Pakowski then focused on the intention of the author. She said the intent of pornography was to provide sexual excitement, but this book’s intent was different—it was to show the author’s unique experiences and journey.

She said she had recommended adding “Fifty Shades of Grey” to bookshelves. Later, she decided not to, because of the author’s sexual intention.

“Fifty Shades of Grey” landed three times on the American Library Association’s annual top 10 list of most banned and challenged books, because of sexually explicit content.

After the meeting, both high school principals, Courtney DeMent and Edward Schwartz, announced their decision to Newsome through email: We agree “Gender Queer” should remain at our libraries.

The book spoke to a unique group of students and had received positive reviews from authoritative organizations, the email read. The graphics also helped reluctant readers to find joy in reading, they added, according to an email obtained by The Epoch Times.

“Students have the choice to check this book out or not; those who do, and find it distasteful, can return it and [hopefully] select another book to read,” they wrote.

Thiele told Newsome that librarians shouldn’t be expected to comment on the legal definition of pornography; that was a lawyer’s job, according to an email obtained by The Epoch Times.

Thiele spoke with school board attorneys, who wrote in an email that the books weren’t pornography.

After the heated November board meeting, District 99 administrators moved the December meeting from the new spacious stadium to a small community room in an old administrative building.

Only 20 people were allowed to attend. Two Downers Grove police officers and one school security guard were assigned to be present at the board meeting.

On Dec. 13, the day of the meeting, Noel Manley, a parent who has been active in local school board meetings for 10 years, arrived an hour and a half early to make sure he got a chance to hold the microphone.

This would be District 99’s last school board meeting of the year, and Manley wanted to use the three minutes given to each public commenter to summarize issues of the year, including that of Kobabe’s books.

Manley didn’t think District 99 administrators would take Kobabe’s books off the shelves, but the issue could rally parents to support like-minded candidates in upcoming school board races, Manley told The Epoch Times.

“You have to constantly beat the drum to get people to vote on these issues,” Manley said.

As for Newsome, he didn’t attend the December meeting at all. He went to an event supporting local congressional candidate Rob Cruz, who runs on an education agenda that speaks to Newsome.

“Am I going to make a difference? Maybe yes, maybe not,” he said.

“But I’ve got to at least try. I cannot go on and think that I didn’t even try to help my children’s future.”