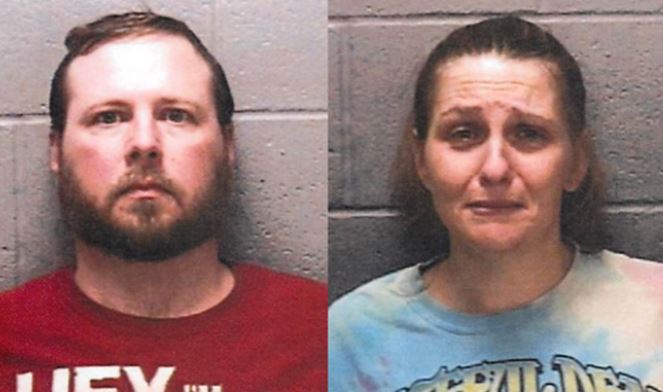 Michael and Georgena Roberts were sentenced to 25 and 20 years in prison, respectively, for starving their child Liam, 6, to death. (Jerseyville Police Department)
Crime and Incidents

A judge sentenced Illinois parents to decades in prison for starving a child to death as the boy’s biological mother called them “evil people.”

Prosecutors said that Michael and Georgena Roberts withheld food from Liam Roberts, 6, eventually causing him to die in November 2017. They pleaded guilty to first-degree murder charges.

Chief Circuit Judge Eric Pistorius said that the case was “beyond comprehension” as he sentenced Michael Roberts, Liam’s biological father, to 25 years in prison and stepmother Georgena Roberts to 20 years in jail. They faced up to 60 years in prison each.

Pistorius said that he kept in mind that neither of the Roberts had criminal histories and Georgena Roberts has a number of mental health issues.

Kim Roberts, the biological mother of Liam, said that Michael Roberts failed in his role as a father.

She said during the Jan. 16 sentencing in Jerseyville that Liam died “terrified” and “alone” and that it was necessary to punish the “evil people” who murdered her “beautiful son,” reported the Alton Telegraph.

Maj. Scott Woelfel, the Jerseyville Police Department deputy chief, told the judge that the investigation found that the Roberts began starving Liam as a form of punishment shortly after they were married, about 18 months prior to the death.

Personnel at Liam’s school said the boy was so obsessed with food “when he came to school he would literally eat food off the floor.” In a shocking comparison, the detective said that the night before Liam’s death, he and his brother were given bologna while the other children in the family ate chicken strips and fries.

“The last actual meal Liam had was about one year prior to his death, when Michael and Georgena got married,” Woelfel said, reported the St. Louis Post-Dispatch. “We talked to neighbors, friends, coworkers, family members, and they all said they were never allowed to see the children. Some of the neighbors said they didn’t even know (the youngest children) existed.”

Father and stepmom who starved Jerseyville boy to death are sentenced to prison for murder https://t.co/w4gOV8gVle pic.twitter.com/mN4qrIPXW8

Michael Roberts’ attorney, Jessica Koester, said that her client, who wept while she spoke, was working a lot and didn’t want to cross his wife.

“He was out of the house to work 80 hours a week and was frankly lazy, he didn’t want to put up a fight with his wife,” Koester said. “His other three children love and miss their dad. They’ve been to hell and back.”

Michael Roberts later read a statement to the judge.

“I put myself above my kids and I was a coward. My son Liam is dead because I failed him, and my children’s lives are forever changed because of me,” he said.

Georgena Roberts also read a statement during which she said, “I’m sorry for my actions and my inactions.”

Kim Roberts said that she tried to see Liam repeatedly for several years before he died but that Michael Roberts hadn’t let her despite her having visitation rights.