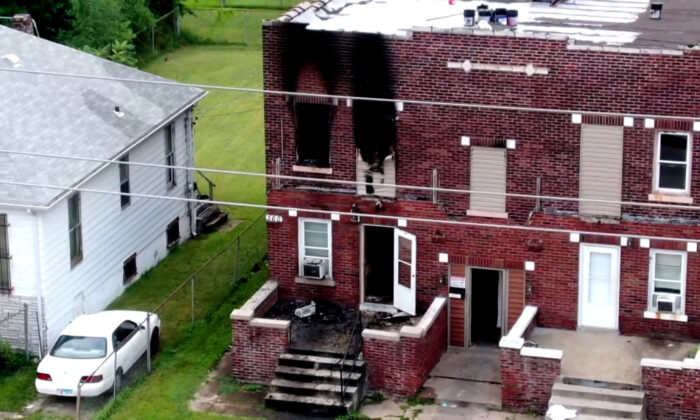 The scene of a fire in East St. Louis, Ill., is seen in this screengrab taken from footage by KMOV on Aug. 6, 2021. (Courtesy of KMOV)
Regional News

An Illinois mother was charged about three months after an apartment fire killed all five of her children, officials said.

Sabrina Dunigan, 34, was charged with endangering the life or health of a child at her home in East. St. Louis, Illinois, prosecutors said, according to KSDK. The charges were filed in connection to an apartment fire in the early morning of Aug. 6, said authorities.

Sabrina Dunigan’s father, Greg Dunigan, and his wife were reportedly at home. Authorities said that Sabrina Dunigan allegedly left the children home with their grandparents before the 3 a.m. blaze, reported the St. Louis Post-Dispatch.

Greg Vespa, an investigator with the Illinois fire marshal’s office, alleged that Sabrina Dunigan left the children unattended and “knowingly caused or permitted a child to be placed in circumstances that endangered the child’s life or health,” according to the paper. Dunigan said she suffered burns on her hands and feet trying to save her children.

“Why are they trying to do this to her?” Greg Dunigan told the paper, adding that he doesn’t understand why she was charged in the case. “She done lost all she can lose already. Why they want to take the rest away, meaning herself? She don’t have nothing left (sic).”

Dunigan added that when the fire occurred, he and his wife were watching the children when Sabrina Dunigan left home to pick up her boyfriend from work at 3 a.m., according to local reports. Dunigan said that he and his wife leapt from the apartment’s second floor to escape.

Greg and Sabrina Dunigan said they believe it was an electrical fire in an apartment with no smoke detectors. Landlord Rudy McIntosh, however, told the Dispatch that their claim isn’t true, saying he put detectors in all his properties.

In 2019, Sabrina Dunigan and her five children were displaced by a previous fire in another East St. Louis home. At the time, she told KSDK that she believed the fire was set by her boyfriend.

“We’re just telling him he has to leave, and he said he was gonna set the house on fire,” she said in 2019. Family members told the local broadcaster last week that that “case was settled.”

It’s not clear if Sabrina Dunigan has an attorney.