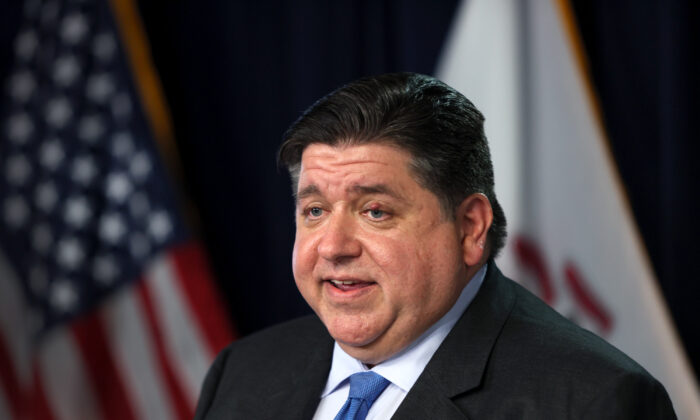 Illinois Mayor Ignores Governor’s Mask Mandate: ‘We Have to Start Moving On’

An Illinois mayor is standing against the statewide mask mandate issued earlier this year by Gov. J.B. Pritzker, lifting the requirement and making the measure optional in Elk Grove Village, a suburban community in northern Illinois.

“We have to start moving on. We’re as safe as we can be. If you want to wear a mask, wear a mask,” Mayor Craig Johnson announced at a city council meeting, ABC 7 reported. “But it’s time to move on.”

Pritzker, a Democrat, announced the statewide mask mandate in late August as he also ordered every eligible student, among other “high-risk settings,” to get vaccinated against the CCP (Chinese Communist Party) virus, which causes the disease COVID-19.

The governor said at the time the measure applies to everyone in all indoor settings who is over the age of 2, regardless of their vaccination status.

Johnson said he is “following the science” as he confirmed earlier this week that the mask mandate will be lifted, which took effect immediately. The mayor explained that the number of COVID-19 patients in the community has been consistently dropping.

“We are following the science. That’s our key,” WGN9 reported. “And the science has said, according to the governor last spring. Once you drop below 5 percent, he’d open up. Well, today we are at 1.6, 1.7 percent. Why aren’t we opening?” he added as he questioned the governor’s line of logic.

The mayor told ABC 7 that the CCP virus in Elk Grove Village is currently not much of a problem anymore, as a large percentage of people in the community are vaccinated, making masks unnecessary.

Pritzker issued the mask mandate in August citing a resurgence of CCP virus cases, spurred largely by the Delta variant of COVID-19, and increasing reports of “breakthrough” cases in which people already vaccinated against the virus are becoming infected.

The Illinois governor announced in October that his indoor mask mandate will be lifted after CCP virus numbers show a steady decline across the state.

On Oct. 19, Pritzker said during a news conference at the James R. Thompson Center in the Loop that he hopes to lift “certain mask mandates” in time for the winter holidays.

“We want to remove the mitigations as we approach the holidays,” he said, the Chicago Tribune reported. “That’s an important marker for us.”