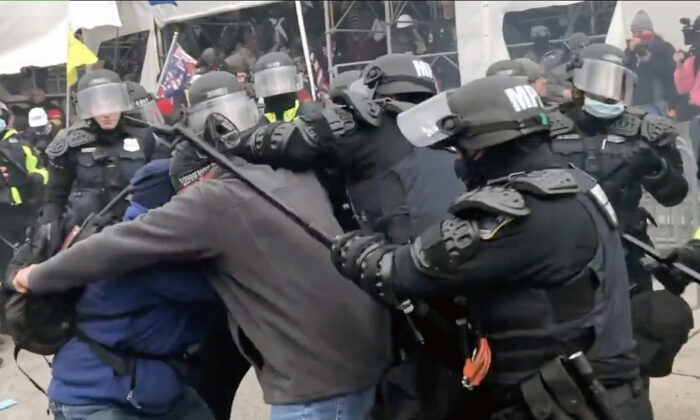 Police attack two protesters on the west side of the Capitol on Jan. 6, 2021, in this scene from the EpochTV documentary, "The Real Story of Jan. 6." (Steve Baker/EpochTV)
US News

An Illinois man pleaded guilty on Tuesday to felony charges for assaulting a law enforcement officer and a reporter during the protests at the U.S. Capitol on Jan. 6, 2021, according to the U.S. Department of Justice (DOJ).

The DOJ said in a statement that 44-year-old Shane Jason Woods lowered his shoulder and rammed into a Capitol Police officer as she began to chase after an individual who sprayed her with a chemical irritant at around 2:10 p.m.

The incident happened in the Lower West Terrace area of the Capitol grounds, the DOJ said. It is not clear if the chemical irritant belonged to the individual or a law enforcement officer.

According to court documents, the officer was knocked off her feet by Woods and sent crashing into a downed bicycle barricade. She immediately felt hurt and the next day described her pain as if she had been “hit by a truck,” according to the DOJ.

The DOJ said that Woods and others later gathered at around 5 p.m. in the media staging area on the northeast side of the Capitol building.

“He walked around some of the piled media equipment that had been and was in the process of being destroyed by other rioters, and he tossed some of it himself,” the DOJ said.

“At the same time, a member of the news media attempted to walk away to protect himself and his camera. Woods took a running start and hit the man with a blindside shoulder tackle, knocking him to the ground and causing him to drop the camera.”

The Jan. 6, 2021, protests took place during a joint session of the United States Congress that had been convened to certify the results of the 2020 general election, which were disputed by former President Donald Trump and his supporters.

During this time, a large crowd gathered outside the Capitol building to protest the certification.

The protests spilled over the permanent and temporary barricades with some people entering the Capitol building. Thousands of protesters, mostly peaceful, remained outside.

The series of events and who was responsible are disputed, with reports of “suspicious actors” who breached the police lines on the east side of the U.S. Capitol.

One protester, Ashli Babbitt, was shot and killed by a U.S. Capitol Police officer while inside the building. Another woman, Rosanne Boyland, was crushed and trampled when the crowd of protesters was pushed out of a tunnel, then repeatedly struck by police as she lay unconscious.

More than 850 people have been arrested over criminal charges related to the protests at the U.S. Capitol in January 2021, including over 260 people who have been charged with assaulting or impeding law enforcement.

Five deaths have been linked to the aftermath of the protests, most prominently the death of Trump supporter Ashli Babbitt who was determined to have died from homicide, having been shot and killed by U.S. Capitol Police officer Lt. Michael L. Byrd.

Three other people died of what were ultimately determined to be natural causes, including Capitol Police officer Brian Sicknick who died on Jan. 7, 2021. At first, his injuries were attributed to protesters but were ultimately found to be due to a stroke.

It is unclear how many protesters may have been injured as a result of police actions on Jan. 6.

Woods was arrested on June 24 in Springfield, Illinois, and is expected to be sentenced on Jan. 13, 2023.