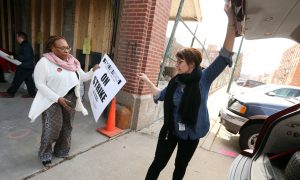 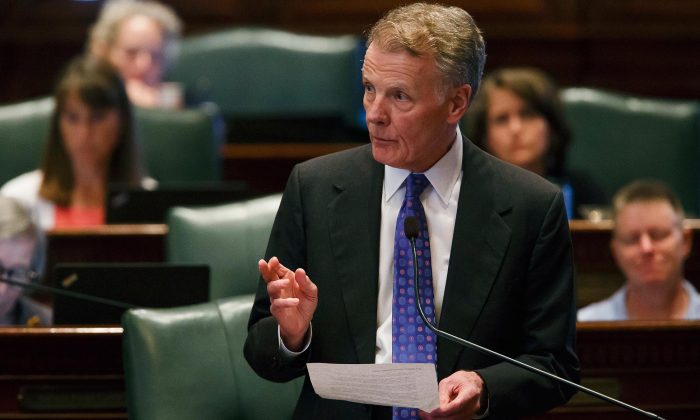 Illinois Speaker of the House Michael Madigan, D-Chicago, gives a speech following the Illinois House voting to override Gov. Rauner's veto and pass a budget for the first time in two years during the overtime session at the Illinois State Capitol, Thursday, July 6, 2017, in Springfield, Ill. (Justin L. Fowler /The State Journal-Register via AP)
US

Illinois has a budget for the first time since 2015.

On Tuesday the Democrat-controlled Senate voted to override Gov. Bruce Rauner’s veto of the proposed budget.

On Friday, July 7, the Democrats in the House, supported by 10 Republicans, completed the task, and rejected the governor’s rejection.

“This tax hike will solve none of our problems and in fact, long run, it will just make our problems worse,” said Rauner.

The budget, Rauner claimed, “does not cut enough spending or pay down enough debt, and does not help grow jobs or restore confidence in government. It proves how desperately we need real property tax relief and term limits.”

While the budget battle stretched on for two years, Illinois’s economy suffered. With no budget, bills were either not paid or paid by court order. The state owes $14.7 billion in unpaid bills.

If the state had failed to pass a budget, the rating would have fallen.

Moody’s told the state that it would hold off on dropping its rating to “junk,” the lowest possible, but if after a month the state is not able to get a handle on expenses, the bond rating might drop.

States have gone bankrupt before. Illinois is in no way immune. The drop in bond rating was no doubt a powerful argument for action in the minds of some lawmakers.

Rep. David Harris was one of the Republicans who voted to override the veto. He said the new budget “ends some of the horrible dysfunction that has infected our government.”

“We have 125 billion dollars in back bills to pay and we have accumulated $800 million in interest on those back bills,” he stated. That amounted to piling $800 million on the floor and burning it—it did no good for Illinois taxpayers, it was pure waste.

He pointed out the impact of lowered bond ratings, calling it a “debt spiral.” Debt would rise, as would interest rates, which would drive up debt, which would force more borrowing at an even higher rate, which would increase debt … .

“To me, enough is enough,” Harris said on the floor of the House. “I was not elected as a state legislator to help preside over the financial destruction on this great state.

Even with the new budget in place, the state comptroller said Illinois will be $185 million short of what it needs to cover basic expenses in August. The state still faces a $6.2 billion annual budget deficit.

Billions of dollars worth of road construction is shutting down. State universities are so underfunded that loss of accreditation is a fear.