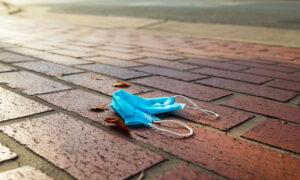 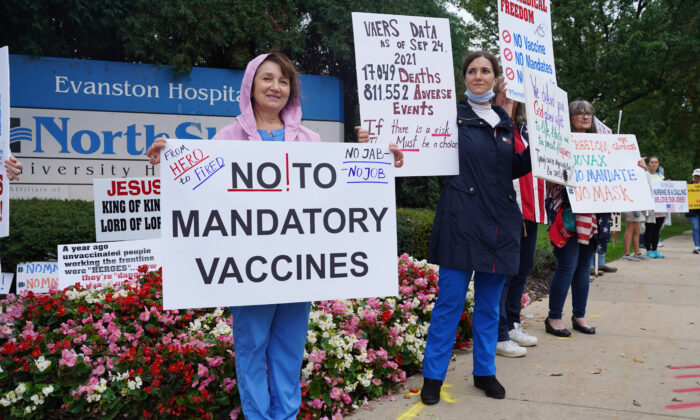 EVANSTON, Ill.—It was David Smith’s first protest, and he never thought it would be against the hospital system where he had risked his own life to save others.

A 34-year veteran medical professional, Smith served AIDS patients in the 90s, swine flu patients in 2009, and COVID-19 patients in the last two years. He caught COVID-19 last July, endured six weeks of headache and high blood pressure, and reported back to work at NorthShore University HealthSystem in May because they asked him for help, he said.

In August, NorthShore ordered 17,000 employees and contractors at all six hospitals to get fully vaccinated for COVID-19 by Oct. 31; non-vaccinated workers or workers whose exemptions are denied are to be suspended on Nov. 1 and fired on Dec. 1, according to an internal memo obtained by The Epoch Times.

Smith submitted a religious exemption request detailing how his religious faith did not support the COVID-19 vaccine. Based on his own medical experience and research, he also believes the antibodies in his body will better protect him against COVID-19 than a vaccination.

But his request was denied with little explanation. He called a head doctor many times to seek explanation but was told repeatedly to just get the shot. “I want to leave this job on my terms, not theirs. I’ve never protested before, I never spoke out before. But it’s about time I say something,” Smith told The Epoch Times.

Lauren Gioia, an operating room nurse at NorthShore’s Highland Park Hospital, also had her religious exemption request denied in late September. NorthShore provided her with a single-sentence explanation: “The information you have provided does not meet evidence-based criteria to preclude from receiving COVID-19 vaccine.”

The Epoch Times reached out to ask NorthShore to explain its exemption review process and provide data on system-wide exemption requests. NorthShore replied on Oct. 13 through its senior public relations director, Jim Anthony, saying that “the vaccines have proven to be safe and effective against COVID-related hospitalization and death. To date, the vast majority of our team members have been vaccinated.”

Of NorthShore employees, 92 percent were vaccinated for COVID-19 by Oct. 7, according to an internal memo obtained by The Epoch Times. NorthShore stated on an Aug. 16 memo that its goal is 100 percent vaccination by Oct. 31.

Besides religious reasons, Gioia also doesn’t think there are enough studies on the long-term effects for her to trust the safety of COVID-19 vaccines. She said she has spent at least 200 hours reading medical studies and watching expert videos to educate herself on the vaccine.

Gioia also has firsthand knowledge about its adverse reactions, she said. One of her nurse friends was blinded for 30 minutes after getting a COVID-19 vaccine shot, and another 25-year-old high school friend developed Bell’s palsy within 24 hours of getting it.

“I’m not anti-vaccine. I am opposed to this COVID shot mandate, and the fact that they’re not honoring exemptions,” Gioia told The Epoch Times at the protest. “If we don’t stand up now, where does this stop?”

In pursuant to NorthShore’s policy, Gioia submitted an appeal within three days of denial by an attorney. If an appeal is denied by NorthShore, that decision can only be challenged through legal action.

In fact, 14 employees have sent a public letter through non-profit law firm Liberty Council to NorthShore saying they will do just that if their repeals are denied. The letter demands that NorthShore must grant the religious exemption requests of the 14 employees and all other similarly situated employees, or face litigation.

Harry Mihet, chief litigation counsel at Liberty Council, told The Epoch Times that he thinks NorthShore’s denials of religious exemptions are illegal on many fronts.

For one, Mihet said the Illinois Health Care Right of Conscience Act prohibits NorthShore from firing employees who decline a COVID-19 vaccine based on their conscience or religious belief. Secondly, he said under Title VII of the Civil Rights Act of 1964, NorthShore has no legal authority to judge the validity or reasonableness of any employee’s sincerely held religious belief.

Mihet also cited a 1990 U.S. Supreme Court opinion on Washington v. Harper in the demand letter to NorthShore, which reads, “The forcible injection of medication into a nonconsenting person’s body represents a substantial interference with that person’s liberty.”

NorthShore responded to Liberty Council that they would review its religious exemption process and asked to delay legal action until Oct. 18, Mihet told The Epoch Times.