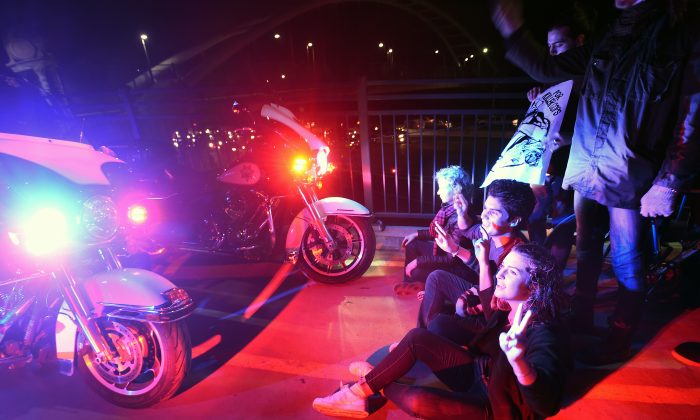 Protesters and police officers face off on a pedestrian bridge over Interstate 80 shortly after protesters shut down traffic in both directions in response to police killings in Missouri and New York in Berkeley, Calif., Monday, Dec. 8, 2014. (AP Photo/Noah Berger)
US

In March, the Illinois Supreme Court struck down a law that made it a crime to record someone without their expressed permission. The law was widely criticized for being too extreme, and trampling fundamental constitutional rights.

Nine months later, a new law that is as extreme as it’s predecessor, has just been passed with overwhelming majority. The bill was almost unopposed, 106-7 in the House and 46-4-1 in the Senate.

The wording of the bill defines a “private conversation” as any “oral communication between two or more persons,” where any of the involved parties had a “reasonable expectation” of privacy.

This new prohibition makes it a more serious felony, class 3, to record police officers, judges, state’s attorney, assistant state’s attorney, attorney general, or assistant attorney general. One could face a maximum of four years in prison for recording a law enforcement official without his consent. Recording a private citizen is a class 4 felony, which can only be punished by three years at most in prison.

The bill was introduced on Tuesday, December 2, voted on and passed by the House the following day, and was passed by the Senate the day after that.