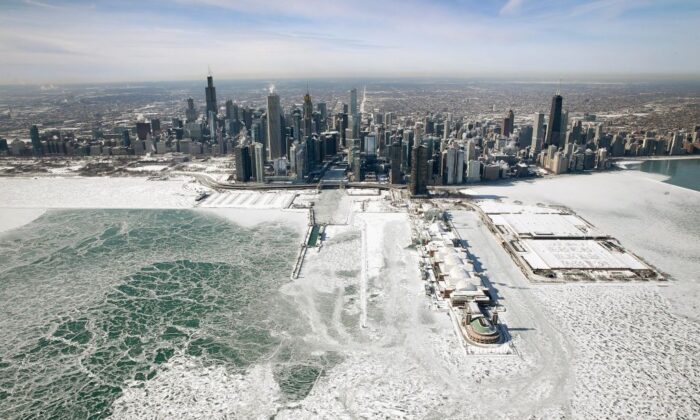 CHICAGO—Illinois has lost more residents than any other state over the past decade, according to data released by the U.S. Census Bureau on Dec. 30. Studies suggests that a few main reasons people are leaving Illinois include dissatisfaction with the state’s high taxes, its government’s policies, and its weather.

The population of Illinois dropped by about 168,000 total in the past decade. Population changes can happen for various reasons, including having more deaths than births. But it’s long been clear from Census data released over the years that Illinois’s biggest problem is people leaving to live in other states.

Much of the loss is comprised of the working-age population, and this is detrimental to the state’s already beleaguered economy, said chief economist for the Illinois Policy Institute Orphe Divounguy.

“If Illinois had simply kept pace with the average state population growth since the start of the Great Recession in 2007 … the state’s population would be … 9 percent larger than it is today,” he wrote in a paper for the institute. “This increase in population would yield an economy that is at least an estimated $78 billion larger than today, equivalent to the entire state economy of Delaware.”

The university and NPR Illinois have conducted similar surveys in the past and received similar results, suggesting these reasons have stayed fairly consistent as the exodus has progressed over the years.

Those directing the survey did note that not all of the residents who had considered moving were equally serious about it. They measured the level of seriousness, for example, by looking at whether these residents had actually looked for housing or jobs in other states.

But, the survey still gives an idea of potential motives behind the exodus.

Illinois was ranked among the “least tax-friendly states” in the country last year by Kipling, a Washington D.C.-based publisher of business forecasts and financial advice.

The state has the second highest property tax in the nation, at nearly 2 percent of the owner-occupied house value, according to the Tax Foundation. It also has the seventh highest combined state and average local sales tax rate, at 8.74 percent.

In May, the state legislature passed a Constitutional amendment to repeal the state’s flat income tax rate of 4.95 percent and install a progressive income tax, in which people with higher incomes will be taxed more than those with lower incomes.

This move had heavy Democrat support; Democrats maintain the supermajority in both chambers. The state estimates $3.4 billion tax revenue from the rate change. The Illinois voters will decide the fate of this amendment on the November 2020 ballot.

While an October 2019 poll by Illinois NPR and the University of Illinois Springfield found 67 percent support this tax change, other polls have highlighted concerns.

For example, a November 2019 poll commissioned by the Illinois Business Association found 68 percent agreed with the statement that “Businesses will cut jobs, or relocate jobs out of state, and Illinois’ economy will suffer” as a result.

What To Do About the Economy

Illinois has the worst fiscal condition among all the states, according to 2018 research by the Mercatus Center at George Mason University. The study measured how well states can cover their short-term and long-term obligations.

The bulk of Illinois’s debt is in pension liabilities. Illinois has the highest pension debt among all states, standing at $241 billion in fiscal 2018. That represents five times the state’s revenue and nearly 30 percent of the state’s GDP, according to Moody’s Investor Services.

During her state of the city address in August, Chicago Mayor Lori Lightfoot called for a fundamental shift in the ways of dealing with the fiscal crisis. She said she rejects the “old playbook,” which relies on property tax hikes, massive borrowing, and shortchanging pensions.

Governor J.B. Pritzker, in a November appearance in Chicago, said he would not consider any constitutional pension reforms for the 2020 ballot. One of the reasons he gave was that such an amendment wouldn’t likely pass the Democrat-controlled state legislature.

The survey by the University of Illinois Springfield that had outlined reasons people want to leave Illinois also found that nearly 40 percent describe the state’s economy as poor, and the majority think the state’s on the wrong track in general.

Regarding the No. 3 reason for leaving the state—the weather—it seems many of those who have considered leaving have had their sights set on warmer places. Some of the top potential destinations, according to the University of Illinois Springfield survey, were Florida (10 percent), Texas (8 percent), Arizona (6 percent), California (6 percent), and Tennessee (6 percent).

In a 2017 editorial for the Chicago Reader, writer Edward McClelland said “weather is to Chicago what football is to Dallas or politics is to D.C.”

The highest paid weatherman in the country is Chicago’s Tom Skilling, he said, because “because there’s so much demand for what he does: our enthralling climatic variety means we need to warned about what’s happening outside two or three times a day.”

He quoted singer Lou Rawls, a Chicago native, who described the lake wind that funnels westbound through the alleys as “a giant razor blade blowing down the street.”

But, he highlighted the silver lining, saying Chicago may be uncomfortable at times but it hasn’t experienced the natural disasters plaguing other regions of the United States.