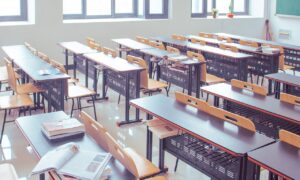 Illinois gubernatorial candidate J.B. Pritzker speaks during a round table discussion with high school students at a creative workspace for women in Chicago, Ill. on Oct. 1, 2018. (Joshua Lott/Getty Images)
US News

Illinois on Thursday became the first U.S. state to ban police from lying to minors during criminal interrogations.

Gov. J.B. Pritzker, a Democrat, signed into law the legislation, known as SB 2122, that seeks to reduce false confessions by minors. It bans police from employing deceptive practices during the questioning of juveniles and goes into effect on Jan. 1, 2022.

The governor’s office in a statement noted that while the use of deceptive tactics such as lying during criminal interrogations was deemed permissible by the judiciary in 1969, it has since been condemned by members of the 7th Circuit Federal Court of Appeals and the Illinois Court of Appeals “because of the risk it poses in producing false confessions.”

According to the Innocence Project, a nonprofit working to exonerate wrongly convicted people, commonly used deceptive interrogation tactics include making false promises of leniency and false claims about the existence of incriminating evidence.

National law enforcement organizations and training agencies have advocated against them, arguing that deceptive interrogation techniques increase the likelihood of a minor making a false confession, his office said.

The Innocent Project says false confessions have played a role in roughly 30 percent of all wrongful convictions overturned with DNA evidence.

“An essential tenet of good governance is recognizing the need to change the laws that have failed the people they serve. My administration has infused that value into everything we do,” the governor said.

Pritzker on the same day signed three other pieces of legislation, saying that they all “advance the rights of some of our most vulnerable in our justice system and put Illinois at the forefront of the work to bring about true reform.”

These include a bill that would require a study of methods to reduce the Illinois’ prison population through similar re-sentencing action and a law that allows offenders to participate in so-called restorative justice programs, in which offenders reconcile with victims. It encourages participation by precluding offenders’ statements from being used against them in future proceedings. Those laws take effect immediately.

Another law taking effect on Jan. 1 next year will allow a county prosecutor to seek re-sentencing for an offender if the original sentence “no longer advances the interests of justice.”

“Together, these initiatives move us closer to a holistic criminal justice system, one that builds confidence and trust in a system that has done harm to too many people for far too long,” Pritzker said.

The bills will “move us closer to a holistic criminal justice system, one that builds confidence and trust in a system that has done harm to too many people for far too long,” the governor added.

Rebecca Brown, director of policy at the Innocence Project, said in a statement that the law that will ban police from lying to minors during criminal interrogations is a “breakthrough” in safeguarding against the wrongful convictions of young people.

It is also “an opportunity to establish interrogation techniques that stem from seeking truth and justice within law enforcement agencies across the country,” said Brown.

Pritzker said he hopes that it will encourage other states to pass a similar law, Chicago Tribune reported.