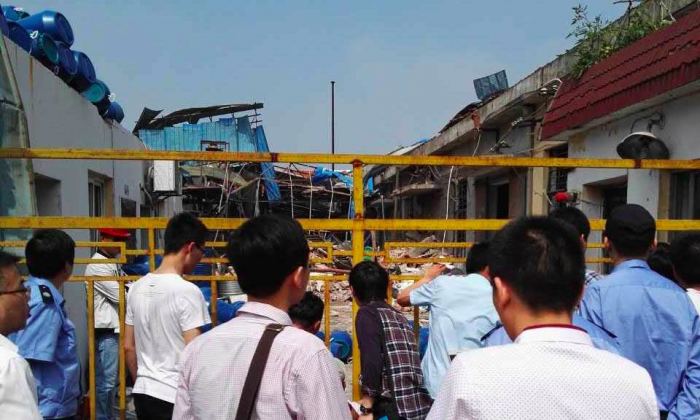 The scene of the factory explosion. (via Beijing News)
China

Following the death of a young graduate student in a Shanghai factory explosion, Chinese public attention has closed in on the all-too-frequent exploitation that is pervasive in the country’s academic scene.

Beijing News reported that Li Peng, a 25-year-old student at Shanghai’s East China University of Science and Technology, died on May 23 along with two other employees at a chemical factory called Joule Wax Co. Ltd.

The same day, Li’s sister, Li Huimin, described in a post on her Weibo social media account how her brother’s boss and supervising professor, Zhang Jianyu, had been forcing him to work at Joule Wax by refusing to publish the academic papers required for graduation.

The university announced May 27 that Zhang was the sole shareholder at Joule Wax.

Classmates and the sister of Li Peng, whose name is the same as that of the former Chinese premier, think that Zhang had been reluctant to lose his protege by letting him publish his work, because he wanted to use Li’s chemistry formulas for his own industrial processes.

“My brother was under great pressure for fear of Zhang not letting him graduate,” Li Huimin wrote in a post made to Tianya, a popular Chinese internet forum. “Zhang wanted to seize my brother’s research findings and use it for his own company.”

Li’s family suspects that he died when conducting a dangerous experiment at the factory. A classmate, who was not named, speculates that the factory equipment was different from the instruments available to research in a controlled lab setting, presenting a probable cause for the explosion.

Li’s family is currently seeking compensation from the school.

Internet comments on the news of Li’s tragedy condemned the state of Chinese academia and some described their own experiences.

“My brother is also doing his masters, and he says that his supervisor has them do work all the time for little pay, so he gets to keep most of the profit,” one comment says. “Because of this he doesn’t have time to conduct the experiments he needs to write papers. You must know how important these papers are to graduate students.”

Another netizen described how academic supervisors use their students for various favors. “I picked up my supervisor’s child multiple times and accompanied the child to extracurricular classes. I played ball with his kid, I picked up his family members from the train station. Such examples from my two years of grad school are innumerable.”

Li Peng is not the first victim of shady academic relations. This January, Jiang Huawen, a 25-year-old graduate student at the Nanjing University of Posts and Telecommunications ended his life by jumping off a building. Jiang’s death is widely speculated to be the result of depression as his supervisor delayed his graduation over an internship salary dispute.

Commercialization of academia in recent decades has bred corruption in China’s higher education institutions, says Xie Tian, a professor at the University of South Carolina Aiken. “The problem with China is that society is stuck in an atmosphere that favors abuse of power for personal gains. … Many of these corrupt habits have spread into academia.”

Chen Zhili Under Fire for ‘Commercialization of Education’

Ren Dong, a professor at Beijing’s Capital Normal University, told the U.S.-based China News Digest that many students have become frustrated by supervisors coercing them into unrelated, self-serving research work.