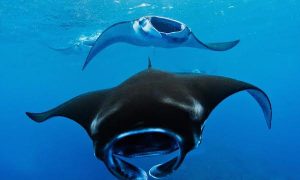 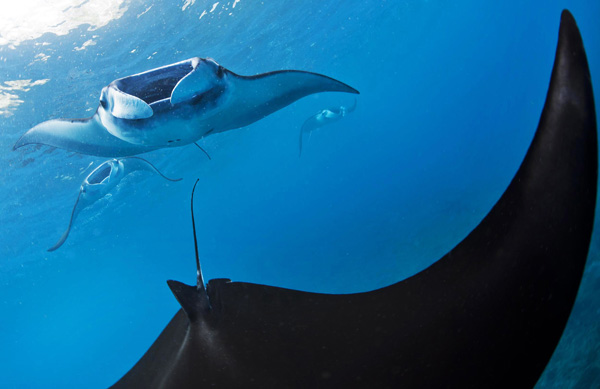 For the first time, Indonesia has sentenced an illegal manta ray trafficker to jail time and a fine, reports the Wildlife Conservation Society (WCS).
Environment

For the first time, Indonesia has sentenced an illegal manta ray trafficker to jail time and a fine, reports the Wildlife Conservation Society (WCS).

The verdict is the first under Indonesia’s new law against people who illegally trade in manta ray parts. The law was passed last year.

“Manta rays are a threatened fish species and full protection of manta had been stipulated through the Minister of Marine Affairs and Fisheries Decree No 04/KEPMEN-KP/2014,” said Director General for Marine, Coastal and Small Island Affairs,” said Sudirman Saad in a statement. “Under this act, any fishing or trading of manta rays or their body parts are prohibited, and violation of act will be sentenced by law.”

The trader, named Wrd — who like many Indonesians goes by one name — was arrested last September with 27 kg of manta plates.

Wrd was sentenced by Cirebon District Court to 16 months in prison and fined $5,000, just slightly above the $4,500 market value of the manta plates.

Wrd was one of five traders arrested in Java and Bali between August and September 2014 during a campaign by Indonesia’s Ministry of Marine Affairs and Fisheries with support from WCS’s Wildlife Crimes Unit.

WCS called the arrests a “tough, new stance” by Indonesia “to protect manta rays and stop illegal fishing and trading”.

Manta rays are typically targeted for their gill plates, which are used for purported medicinal purposes in East Asian markets, according to WCS.

“Manta rays are increasingly targeted for their gill plates, the pre-branchial appendages that filter the plankton on which they feed,” said WCS in a statement. “These gill plates are in demand in Chinese markets for use in a health tonic that is not recognized in traditional Chinese medicine (TCM). One kilo of manta gill plates can fetch $250-$500 in China, and the total trade is worth $30 million annually.”

That value pales in comparison to manta rays’ worth alive in the wild for the tourism market.

“A growing tourism trade based upon manta-watching is estimated to be worth $140 million annually, with Indonesia as one of the top-ten destinations,” said WCS.

There are two species of manta rays: the reef manta (Manta alfredi) and the oceanic manta (Manta birostris). Both are listed as Vulnerable on the IUCN Red List of Threatened Species.

This article was published by news.mongabay.com and republished with permission, original article here.