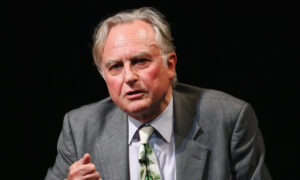 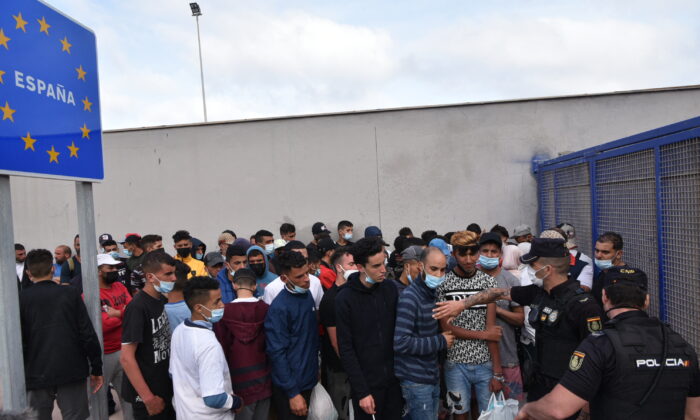 Migrants wait to cross the border back to Morocco at the Spanish enclave of Ceuta on May 20, 2021. (Antonio Sempere/AFP via Getty Images)
Viewpoints

Illegal Immigration and the Use of Children

Last week, with the obvious connivance of the Moroccan authorities, about 8000 illegal migrants swarmed from the sea into Ceuta, one of two Spanish enclaves on the northern coast of Morocco, hoping thereby to gain entry to the mainland of Europe.

About 5600 of the would-be migrants have so far been returned to Morocco, but it still means that Ceuta’s population was increased by nearly 3 per cent within a matter of days.

Both Ceuta and Melilla have been Spanish possessions for centuries, but sovereignty is disputed by Morocco. Whether Spain benefits or Morocco suffers from the enclaves is beside the point: their symbolism means far more to both countries than any practical value that they have. This alone should be sufficient to refute the materialist theory of history.

Another reason for Morocco’s displeasure with Spain is the latter’s decision to admit Brahim Ghali, founder and leader of the Polisario Front, which is trying to wrest independence for the Western Sahara from Morocco, for treatment of his COVID-19 infection (Ghali is 74).

Spain says that it acted for purely humanitarian, not for political, reasons; perhaps unsurprisingly, Morocco does not accept this. Selective humanitarianism is always suspect.

Migrants and aspiring migrants are useful to Morocco as a source of revenue and as an instrument of blackmail. Migrants remit to Morocco an amount of money equivalent of a quarter of all Moroccan exports.

The ability to increase or decrease the number of Moroccan migrants to Europe is a means of extracting financial aid and diplomatic support from Europe, which is an implicit recognition by Morocco that its citizens are now regarded by the countries to which they migrate as a liability (or worse, as a positive curse).

This must be permanently unsettling for, and insulting to, those Moroccan immigrants who are already resident in Europe, some proportion of whom are well-integrated.

Of the 8000 would-be migrants who entered Ceuta recently, at least 1000 were unaccompanied minors, including young children. By international convention, they cannot be sent back whence they came, even if it is known whence they came.

There are now reports of groups of children lost in Ceuta; humanity demands that they be looked after, fed, and sheltered. No doubt it is hoped by those who sent them that human rights law will subsequently allow their parents to join them afterwards: for do not children have an inalienable right to a family life?

The use of children in this fashion is appalling: I doubt that anyone other than members of the Moroccan authorities would find it otherwise. Agreement thus far is easy, but thereafter it might cease.

Some would say that the willingness of parents to resort to separation from their own children, thereby exposing them to terrible hazards and dangers, is a measure of the human desperation behind it: for who would do such a thing frivolously or with a light heart? Therefore, even the parents of the migrant children are to be pitied. They must be desperate indeed to act as they do.

Others might say, however, that the abandonment of children to the hazards and dangers of illegal migration is but another instance of Man’s fathomless capacity for evil. Those who send their children into a hostile void are using them for material advantage, to obtain goods and comforts that they could secure any other way.

In essence, they are willing to risk the safety of their children for the chance of access to a washing machine or a television with a large screen.

It cannot even be said that they value the intellectual or political freedom that migration will bring them, for once arrived and settled many of them will be in favour of inhibiting, or even prohibiting, debate on the foundations of their own religion.

They do not yearn to breathe free; they yearn for an easier, more prosperous life. These are not wicked desires in themselves, and no person who lives in comfort should condemn or deprecate them; but they are not such as should lead to the wicked sacrifice of children.

Alas, the use of children as instruments for political or selfish ends is not new. I was much struck on reading George Orwell’s book, “Homage to Catalonia,” that the author saw nothing wrong with the use of child soldiers (on the Republican side), even though he knew that some of them had in effect been sold by their parents to the Republican army, other than the practical objection that they had a tendency to fall asleep when on night duty and were therefore useless as look-outs.

Presumably, what he considered the justice of the cause was so dazzling to him that it blinded him to the elemental horror of using children as soldiers.

The same is true (to a much lesser degree, of course) of parents who take their children with them to political demonstrations. When they give their child a political placard to hold up above the crowd while they sit them on their shoulders, they take advantage of the sentimentality that so readily attaches to children.

If a child holds aloft a placard demanding that the polar bears be saved, or whatever the cause du jour may be, who will be found to argue against that cause? Are not children innocent and sacrosanct? Therefore, when they espouse a cause, it must be good.

To contradict a child is to be a nasty or unfeeling person and the opponent of a good cause into the bargain. The use of children in this fashion, then, is not an appeal to logic, indeed it bypasses logic; it instead takes advantage of the kind of feelings that most of us have when we see a sweet little kitten or puppy.

The fact that children, by definition, cannot understand what demonstrations are about, and that many demonstrations have a tendency to turn nasty, does not inhibit some parents from taking their children to them.

No doubt such parents would defend themselves by saying that if they could not take their children, they could not demonstrate at all, and demonstration is a democratic right: but this is to suffer, in a small way, from the same moral blindness as George Orwell.

A regime that either permits or encourages the use of children as instruments of blackmail or propaganda is despicable. But even the minor exploitation of children for political ends, however laudable in themselves, is horrible.