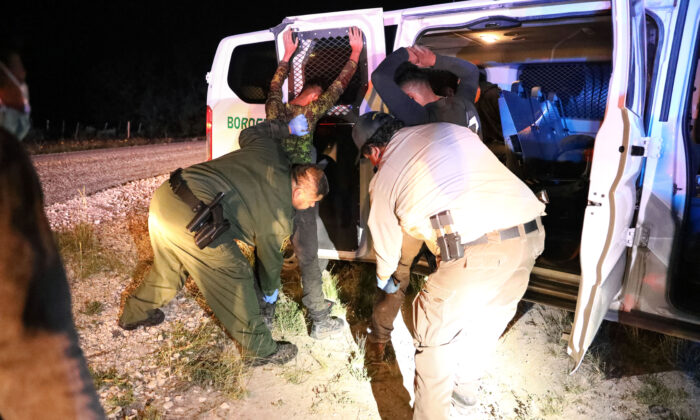 KINNEY COUNTY, Texas—This year’s illegal immigrants are unlike those from previous years, according to Kinney County Sheriff Brad Coe, who was also a Border Patrol agent for 31 years.

“We’re starting to see more intentional damage,” Coe told The Epoch Times. “I’ve never seen it quite like this. Somebody’s making a statement.”

He said in the past six months, illegal aliens that get past Border Patrol in the Del Rio, Texas, area are walking through ranches, destroying fences and water pipes, leaving water faucets on, and breaking into homes.

The cost of replacing a mile of fencing can be up to $30,000, several ranchers told The Epoch Times.

In May, Border Patrol detected 51,000 illegal immigrants that slipped past them along the U.S–Mexico border. In the same month, apprehensions hit a 21-year monthly high, with the agency arresting 180,034 illegal border-crossers.

The majority of the illegal immigrants eluding Border Patrol and walking through the ranches, or being smuggled in vehicles, are young males traveling in groups, according to local sheriffs and Border Patrol agents.

Many ranchers and homeowners are now having to constantly carry a firearm while on their property, and Uvalde County Sheriff Ruben Nolasco said the illegal immigrants now are more aggressive.

A resident told Nolasco that he had to hold an illegal alien at gunpoint, but the man still wasn’t backing down.

“And [the resident] finally had to cock the hammer back and say, ‘Hey, you take a step further, then things are gonna change here,'” Nolasco said. “That’s the last thing I want to hear—that we have a shooting, [that] we have somebody that had to kill somebody … I hope it never happens.”

Nolasco said stolen vehicles, criminal mischief, and burglaries have all ticked up in conjunction with the influx of illegal aliens this year.

“Most of the [vehicle] stops, they’re finding weapons in the vehicles, so that’s nuts.”

Coe said in the past, illegal immigrants crossing through his county would be respectful and largely stay away from homes and property, unless they really needed help.

“These people now, they’re demanding, ‘You will feed me, you will give me water,'” he said.

Uvalde Mayor Don McLaughlin said a resident was given a list of demands by a group of illegal aliens that approached him at home. Another couple was threatened with “I know where you live” by an illegal alien as he was being arrested on their property.

Rancher John Sewell said his three Blue Lacy dogs have likely helped change the outcome in several situations, including when a group of men approached and said they wanted to take his truck.

Coe said he doesn’t expect things to slow down before October, as summer is usually the busiest, and most dangerous, crossing season.

“Normally, around here, we have one death every 18 to 24 months—somebody will find a deceased person on their property,” he said.

“This is May, we’ve had two this month. So if that’s any indication of what the rest of the year is going to be like, that’s going to be kind of scary.”

Meanwhile, the governors of Arizona and Texas have asked other states to deploy available police or law enforcement to the U.S.–Mexico border to assist Border Patrol agents as they deal with a surge in encounters.

“With your help, we can apprehend more of these perpetrators of state and federal crimes, before they can cause problems in your state,” Govs. Greg Abbott and Doug Ducey, both Republicans, wrote in a letter to other governors on June 10.

Abbott announced on June 10 that Texas will begin arresting illegal immigrants who enter the state. “We’re going to start making arrests, sending a message to anyone thinking about coming here: You’re not getting a free pass. You’re getting a straight pass to a jail cell.”