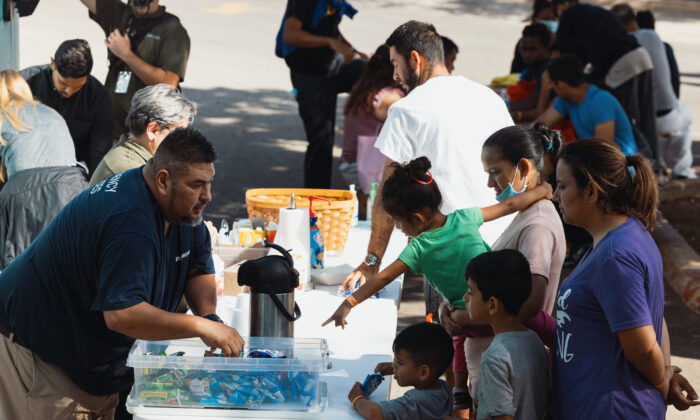 Illegal Immigrants in Martha’s Vineyard Is Not a Win

Florida Gov. Ron DeSantis’ decision to send illegal immigrants to Martha’s Vineyard is not something to be celebrated.

Don’t get me wrong. It has been enjoyable to expose the hypocrisy of left-wing pro-illegal immigration enthusiasts and watch them squirm as their redoubts of elitism are inundated with the very problems they tell us are right-wing myths.

The usual talking heads on cable television have reverted to the old standby of racism and xenophobia accusations—nothing new there. Republican governors like DeSantis and Greg Abbott of Texas have handled it well.

Anyone who doesn’t kiss the ring of “diversity is our strength” is used to being castigated as a Nazi or a fascist. The squeals about “Hitlerite tactics” and “pure evil” should subsequently be met with the appropriate response: laughter.

That is largely what DeSantis and Abbott have done. Good. Fear of being called some type of “phobe” or having The Atlantic write mean things about you is the hallmark of the old “conservative” movement in America. Back then, the standard for determining acceptable discourse was whether or not your invitation to the beltway cocktail party circuit would be revoked.

Those days are gone.

Seeing bastions of left-wing disconnect come face to face with the repercussions of the policy positions that they support does not make the border any more secure. Yes, it’s temporarily amusing to see the confused looks on smug faces in a place where “IMMIGRANTS AND REFUGEES ARE WELCOME” signs practically litter the streets.

However, any temporary satisfaction does not change the fact that 2022 will likely see the highest levels of illegal immigration on an annual basis, expected to reach up to 2.1 million.

The “sanctuary cities” will almost inevitably divert the necessary resources to address the arriving illegals. Taxpayer money will be directly subsidizing efforts to integrate them into society. These are all blue states that have fought against efforts to ensure election integrity, castigating voter ID as racist, and standing firm in their efforts to not distinguish between citizens and non-citizens when determining the population size.

All the illegals transported there will almost certainly be able to cast a vote. Population estimates also determine how many electoral votes each state receives for presidential elections and the number of congressional seats in each state.

The number of illegal immigrants currently being transported to these jurisdictions may not be enough to impact this apportionment in the short term. But why would Republican governors actively support even an incremental expansion in Democrat prospects at power?

The photo shoot of having illegal immigrants arriving at places such as Washington, D.C. or Martha’s Vineyard are temporary moral victories that do nothing to actually address the problem of illegal immigration. America needs real solutions.

The moves by Abbott and DeSantis have demonstrated to “sanctuary cities” such as Chicago and New York the type of chaos unleashed by unrestricted illegal immigration and the damage it does to local communities. Chicago Mayor Lori Lightfoot accused Abbott of “manufacturing a humanitarian crisis” by busing illegals to her city.

There is a real and persistent “humanitarian crisis” in America—it’s in the border towns, and Lightfoot is getting just a small taste of the challenges that they have to deal with on a daily basis.

Lightfoot and other members of her ideological persuasion are beyond convincing, however, and resources should not be diverted for such public stunts. Instead, Abbott should worry about reinvigorating and expanding Operation Lone Star on the southern border.

This was the action taken by Abbott to deploy Texas National Guard troops to the border to try and fill the gap for the lack of support coming from the Biden administration in dealing with the open flood gates. While originally set at 10,000 troops, that number never arrived, and those deployed have been dwindling ever since the initiative began.

On Sept. 14, another announcement was released that more service members would be sent home. “Increased efficiencies” were cited as justification for the latter.

It’s easy for me to write against reducing troop numbers at the border from the comfort of my office, but the fact remains: There’s a crisis on the southern border, and the national government is doing nothing to address it. Republican governors such as Abbott must have the courage to enact the measures that are commensurate with the magnitude of that crisis. It’s easy to talk about “an invasion” on the border, but words are meant to convey truth; if that’s the case, then there’s a responsibility to address it.

Use the resources under your control to begin shipping illegal immigrants back into Mexico, not the American heartland, to “own the libs.” The bus-fulls of foreign intruders should be sent back south across the border under the protection of the deployed National Guard.

Is Mexico going to stop a U.S. military convoy that is enforcing the law of the land, an action only needed because of our southern neighbor’s total refusal to stop—and in many cases encouragement of—illegal aliens pouring into this country?

Let them try. At best, it will force the Biden administration to take the situation seriously and face the ultimatum of either fulfilling the constitutional duty to which he swore an oath or face an international crisis. At worst, it will force a crisis over the legitimacy of power between states and the national executive, creating a domestic crisis.

Nobody wants that, but the options for defending the sovereignty of this country are rapidly diminishing. Instead, the Biden administration and the Washington establishment focus all of their concerns on the sovereignty of Ukraine while generally disdaining the notion of a sovereign United States.

Similar to the critique of Abbott, why not use that $12 million to establish a means for deporting illegal immigrants back to the countries they are coming from or even citizens of? Again, are we too afraid of some type of backlash from Venezuela that we won’t take the actions necessary to protect this country? Are our politicians more concerned with avoiding mean words from a communist regime in Caracas than securing the safety of Americans in their own homeland?

Have we as a country become so spiritually weak and morally unsure of ourselves that we refuse to put the interests of our own people first?

Instead of focusing attention on trying to make Democrats look like hypocrites, why doesn’t DeSantis look to ally with fellow governors like Abbott and create a coordinated effort to begin shipping out illegal aliens and deterring future newcomers?

The latter point is particularly important. Delusional ideologues like Lightfoot try to take the moral high ground when referring to humanitarian concerns. Still, the truth is that refusing to prosecute the laws of this nation is the root cause of the latter. Opening the door with zero threat of repercussion will attract more individuals attempting to enter the country illegally. Who can blame them? Anyone who has a basic understanding of incentives would expect such.

Facilitating that process and refusing to provide an aura of deterrence is the true problem. Democrat anger is rational on that point, even if it misattributes the causes from which it springs. Obviously, free flights for illegals directly into the American heartland, where their arrival will be celebrated by bleeding heart liberals (before proceeding to quickly move them away from their actual vicinity), will incentivize more people to come.

The true humanitarian thing to do for illegal immigrants, present and future, that are breaking the law in entering this country is to send them back from the direction they came—not further north.

Most importantly, however, is that it is the true humanitarian thing to do for those that politicians are actually elected to represent: the American people.

We need to say to those politicians: The time for moral victories is over. Start doing what needs to be done to protect our country.