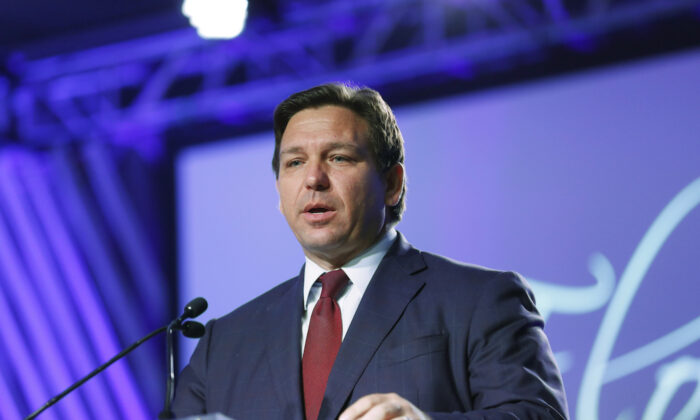 Illegal immigrants flown to a Massachusetts island on orders from Florida Gov. Ron DeSantis sued the governor on Sept. 20, claiming they were subject to a fraudulent and illegal scheme.

Florida officials, acting in concert with others, looked for immigrants by pretending to offer humanitarian aid outside a shelter in Texas and other areas, according to the lawsuit.

“To gain the Plaintiffs’ trust, and to induce unwitting cooperation with Defendants’ scheme, the Doe Defendants provided items such as $10 McDonald’s gift certificates to class members suffering from chronic food insecurity,” states the 35-page suit, filed in federal court in Massachusetts. “After luring Plaintiffs by exploiting their most basic needs, the Doe Defendants then made false promises and false representations that if Plaintiffs and class members were willing to board airplanes to other states, they would receive employment, housing, educational opportunities, and other like assistance upon their arrival.”

The illegal immigrants, who aren’t identified by name, were given free hotel rooms away from migration facilities. They were told they’d be flown to Boston or Washington, D.C., but were instead transported to Martha’s Vineyard, an island in Massachusetts, according to the suit.

The officials who transported them “disappeared and did not answer alarmed calls from the class members to get information about what had gone wrong after they landed,” the suit said. “But nothing had ‘gone wrong.’ Instead, the scheme worked exactly as the Defendants intended.”

The class-action suit alleges violations of constitutional rights and federal law, including the Civil Action for Deprivation of Rights Act. Plaintiffs are asking for a ruling declaring what DeSantis and other officials did is illegal and a prohibition against them from taking similar actions in the future. They also seek payment for damages.

DeSantis, a Republican who is running for reelection, has said that the immigrants, whose flights originated in Texas, signed consent forms before being flown to Martha’s Vineyard.

“So it was clearly voluntary and all the other nonsense you’re hearing is just not true. And why wouldn’t they want to go, given where they were?” he said on Fox News on Sept. 19.

The office of DeSantis said the new suit was a case of activists taking advantage of illegal immigrants.

“The immigrants were homeless, hungry, and abandoned—and these activists didn’t care about them then,” Taryn Fenske, DeSantis’s communications director, told The Epoch Times via email. “Florida’s program gave them a fresh start in a sanctuary state and these individuals opted to take advantage of chartered flights to Massachusetts.”

The office released a signed consent form that stated the signers agreed to be transported to locations “outside of Texas … in sanctuary States.” The forms are also given to illegal immigrants being bussed from Texas to so-called sanctuary cities, or jurisdictions that say they welcome illegal immigrants and largely decline to cooperate with federal authorities on immigration enforcement.

The nonprofit organization Lawyers for Civil Rights filed the suit on behalf of the immigrants and Alianza Americas.

“No human being should be used as a political pawn in the nation’s highly polarized debate over immigration,” Iván Espinoza-Madrigal, executive director of Lawyers for Civil Rights, said in a statement.

“For the Governor of Florida to cynically use recently arrived immigrants who have applied for asylum in the U.S. to advance a hate-driven agenda intended to create confusion and rejection throughout the country, is not only morally despicable, but utterly contrary to the best traditions of humanitarian protection embraced by most Americans,” added Oscar Chacòn, Alianza Americas’ executive director. “That is why we have taken the steps to legally challenge what we view as not only a morally reprehensible action, but what we believe is also illegal.”