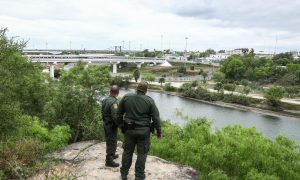 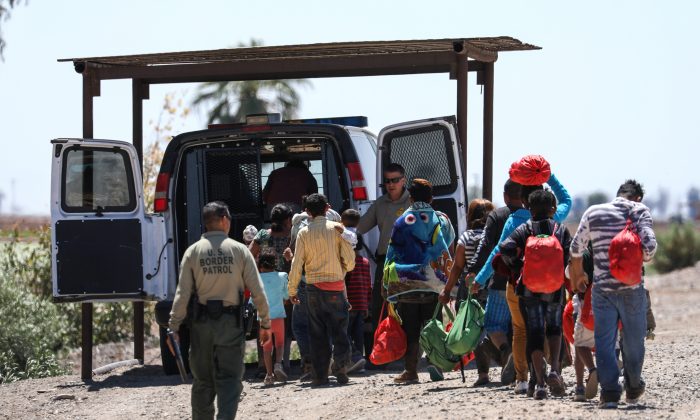 A group of illegal aliens is processed by Border Patrol agents after crossing from Mexico into Yuma, Ariz., on April 13, 2019. (Charlotte Cuthbertson/The Epoch Times)
US News

They had just illegally crossed the Colorado River and blindly crashed their way through the scrub to find Border Patrol in the near-blackness of night.

Everyone froze, standing face to face, until an Epoch Times reporter said, “Buenas tardes” and started asking questions in Spanish. The surreal moment passed only once we started slowly walking toward the small canal bridge that is the proxy waiting area for Border Patrol to take over.

But border agents had responded to another group further down the canal, so the local police officer corralled everyone and left us to interview them after conducting a quick welfare check.

One woman, who had a 7-year-old child with her, said she plans to go to Florida, where her brother-in-law lives. She said her husband and their 4-year-old are still in Guatemala.

She said she had traveled north by bus and truck. “Some friends told us where each city was and that’s how we came.”

“We paid a lot, for so many buses and a little food, plus what the mafia people took from us in our country,” he said.

He plans to live in Georgia, where he has a cousin.

Border Patrol arrived and processed the group—taking names, checking any documentation, and handing out a clear plastic bag for belongings. A van was at the ready to take them to the processing facility, and they were whisked away.

“I think Americans don’t truly understand. They think that everybody is here to claim asylum because they have a real credible fear in their country,” said Yuma Sector Border Patrol Chief Anthony Porvaznik on April 17. “In Border Patrol custody in Yuma, we really have a very small percentage of people that actually claim asylum or credible fear in our custody—it’s less than 10 percent.”

He said once the illegal immigrants leave Border Patrol custody and speak to lawyers and different groups, they are encouraged to seek asylum on the basis of credible fear of return.

“And so, that’s usually down the road—if they show up for their first hearing, which is usually not the case,” Porvaznik said. “Over 90 percent are really here for economic reasons or to unite with someone they know already in the United States. And neither one of those reasons are grounds for asylum or credible fear.”

Border Patrol in Yuma is so overwhelmed, mostly with large groups of families coming from Guatemala, that agents don’t have enough time to do a thorough check on everyone before releasing them—let alone keep the border secure.

“I have 50 or 60 percent of my manpower not focusing on border security, national security-related issues,” said Porvaznik.

“I have over 1,100 people in custody in Yuma—today. That’s the most we’ve ever had in custody.”

The numbers are so overwhelming—all three of Yuma’s stations have a combined capacity of 410—that there is no choice but to release people. Family units are released, while single males remain in custody.

“We’re spending over $100,000 a month on all the suppliers that I mentioned, which is going to be a little over $1.2 million for Yuma sector, this year alone.”

On top of that are the medical costs.

“We have 24/7 medical service providers in both of our facilities in Yuma. And it’s just a huge strain on our resources,” Porvaznik said.

The mayor of Yuma, Douglas Nicholls, declared a state of emergency on April 17, saying, “There is an imminent threat of having too many migrant releases into our community, and it’s above our capacity as a community to sustain.”

Yuma, with its population of around 95,000, is struggling to handle the volume of mostly Central Americans flooding in.

Local NGOs such as the Salvation Army and Catholic Community Services, which are providing care to the migrants after Border Patrol releases them, are also over capacity, and the flow isn’t abating.

“The nonprofits have done a great job of continuing to try to move migrants onto their final destinations—which is not Yuma, they’re not looking to reside in Yuma,” Nicholls said. “However, the transportation network is just insufficient in order to keep up with the demand.”

On any given day, the local Greyhound bus station fills up with bunches of migrants before the daily 11:35 a.m. departure to Phoenix. Their final destinations are all over the country, including Houston, Atlanta, Nashville, Tennessee, and cities in Florida.

The Yuma County Sheriff’s Office is also concerned with the possibility of large numbers of migrants being released onto the streets.

“If they don’t have the means to provide for themselves or some sort of support network, obviously that’s something that we’d have to be concerned about,” said Capt. Eben Bratcher, patrol bureau commander.

Bratcher said Congress needs to take action to close the loopholes that are allowing for unabated illegal immigration.

“From a professional in the law enforcement career for nearly 30 years now, you have to think that politics seem to be more important to them than the security of the nation. And that’s, for lack of a better word, disgusting,” he said.

“The reality is, is they are facilitating this with their own political agenda in mind. And if they can create a class of people who are completely dependent upon the government for existence, then they believe that that will keep their party in power. And that’s the reality. That’s their objective.”

Sheriff Leon Wilmot said the lack of consequences for crossing the border illegally is creating a huge open door that smugglers and cartels are exploiting.

“What part does Congress not understand that if you don’t act, you’re basically supporting the fact that Border Patrol has been turned into a transportation and housing hub for the cartels,” Wilmot said.

“The citizens of the United States are going to have to foot the bill because the federal government’s not doing their job, and they’re just dumping them into those communities and saying, ‘It’s your problem now.’”

For Porvaznik, the toll of being overwhelmed has wider consequences.

He estimates at least 20 percent of those who try to evade Border Patrol, “that we know of,” are successful.

And with more than half of his manpower dedicated to the family units, all three of the highway checkpoints he runs are closed.

“We don’t know what is getting through,” he said. “Last year … we had just under 1,800 pounds of methamphetamine seized at our checkpoints. This year, we’re far below that because we don’t have our checkpoints open all the time. So, that’s hundreds and hundreds of pounds of methamphetamine, dangerous drugs getting into the communities all across America, because it doesn’t stay in Yuma. It goes all across America.”

With reporting by Kimberly O’Connell.