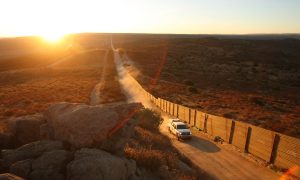 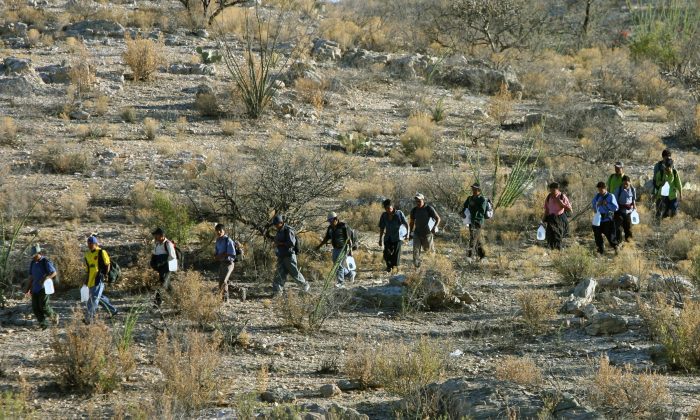 Mexican immigrants walk in line through the Arizona desert near Sasabe, Sonora State, Mexico, in an attempt to illegally cross the U.S.-Mexico border, on April 6, 2006. (Omar Torres/AFP/Getty Images)
US News

New data from the Arizona state prison system shows that illegal immigrants are at least 142 percent more likely to be convicted of a crime than other Arizonans, according to a study by John Lott, founder and president of the Crime Prevention Research Center (CPRC).

Lott also found that illegal immigrants tend to commit more serious crimes, serve 10.5 percent longer sentences, are more likely to be classified as dangerous, and are 45 percent more likely to be gang members than U.S. citizens. They are also much more likely to commit sexual offenses against minors, sexual assault, DUI, and armed robbery.

The data represent all prisoners who entered the Arizona Department of Corrections for the last 32 years.

Lott said the data used in his report includes detailed information on all prisoners who entered the Arizona state prison from January 1985 through June 2017. The data provided allowed the CPRC to separate non-U.S. citizens into illegal or legal groups, which is the first time such a distinction has been available in data.

By lumping together documented and undocumented immigrants, previous research has missed out on the huge differences between these two groups, the report said.

The most likely victims of illegal immigrants are other illegal immigrants, which means the numbers are likely an artificially low estimate of the amount of crime committed—because the crimes they commit against each other are far less likely to be reported due to their illegal status.

Lott found one very distinctive anomaly in the data related to recidivism. Almost 25 percent of U.S. citizens who are convicted in Arizona cycle in and out of jail at least five times, according to the data. However, just under 3 percent of illegal aliens have the same prison history.

“The most plausible reading of the evidence suggests that they are leaving Arizona, presumably to return to their home country [through deportation], overwhelmingly Mexico,” Lott said.

Lott investigated the Arizona prison data to gauge how many DACA-aged criminals were in the system. DACA refers to the Deferred Action for Childhood Arrivals program that former President Barack Obama launched by executive order in 2012.

To be eligible for DACA, illegal immigrants have to be born after June 15, 1981, and to have entered the United States before their 16th birthday and be residing here since June 15, 2007.

Lott used the data that matched the DACA-eligible age by the end of June 2017, which was between ages 15 and 36.

He found that DACA-age-eligible illegal immigrants “are 250 percent more likely to be convicted of crimes than their share of the population.”

The data represent all of the prisoners who entered the Arizona Department of Corrections from January 1985 through June 2017.

During that period, there were 464,641 prisoners who entered the system and 462,978 for whom Lott obtained citizenship status information.

“It is the entire universe of cases, not a sample,” Lott said. For this reason, this data does not have the statistical problems that previous attempts to study this issue have come across, he said.

In the federal prison system, 94 percent of foreign-born prisoners are in the United States illegally, according to a new report by the departments of Homeland Security and Justice.

“It’s time for Congress to enact the president’s immigration reform agenda so that we start welcoming the best and brightest while turning away drug dealers, gang members, and other criminals.”