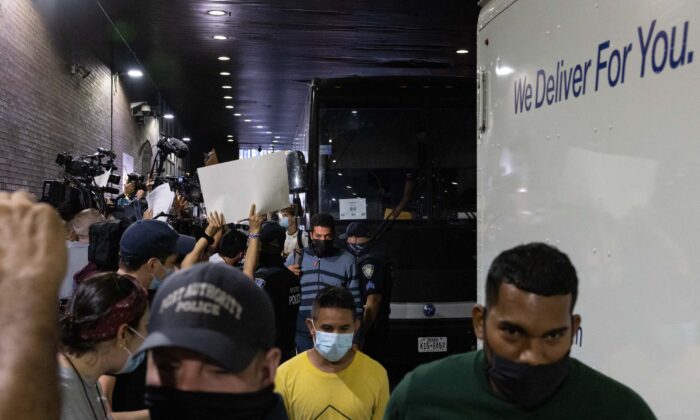 Asylum seekers illegally crossing the border into Texas and then bused to Chicago are now being sent out to other communities.

Texas Gov. Greg Abbott started busing migrants to Washington, New York, and then Chicago to protest the Biden administration’s immigration policies. As of last week, Texas has sent more than 300 illegal immigrants to Chicago and thousands to New York and Washington.

A majority of the illegal immigrants bused to Illinois reportedly are from Venezuela, a country experiencing an economic crisis that has resulted in millions fleeing their homeland.

New York City Mayor Eric Adams has repeatedly clashed with Abbott over his busing initiative. Adams sent a delegation to the southern border with Mexico this week on a fact-finding mission. Abbott had invited the mayors of the three “sanctuary cities” to the border to see firsthand what Texas is dealing with. Abbott blames President Joe Biden and his lax border policies for the influx of foreign nationals entering the country since January 2021.

Chicago Mayor Lori Lightfoot has been highly critical of Abbott for not providing her with advance notice that they were arriving.

“Do the right thing and collaborate and cooperate, instead of us having to guess whether they’re coming or not coming, how many and what are their needs,” Lightfoot said. “That is insanity that doesn’t have to happen.”

A busload of illegal immigrants were sent from a shelter in Chicago to a hotel in the southwest suburb of Burr Ridge Thursday. Mayor Gary Grasso said he nor any village officials were consulted or contacted about the decisions to send refugees to his community.

On Thursday, the Greater Chicago Food Depository delivered a pallet of food for the refugees. They are expected to live at the hotel until they find housing and employment.
Burr Ridge officials note that earlier this year, the village hosted asylum seekers from Afghanistan, “who have now found permanent housing and employment.”

Pritzker’s opponent in the November election, Sen. Darren Bailey, issued a statement on the refugee situation.

“The failures lie with J.B. Pritzker and his pal Joe Biden, who has created a crisis at the border. Pritzker should demand that Biden secure the border and in the meantime, provide the resources to care for these people. If J.B. won’t do that, he should put them in one of his Hyatt’s on his own dime.”

Pritzker is a billionaire heir to the Hyatt Hotel chain.