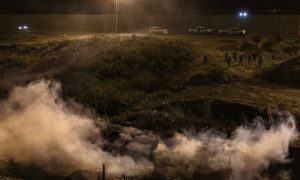 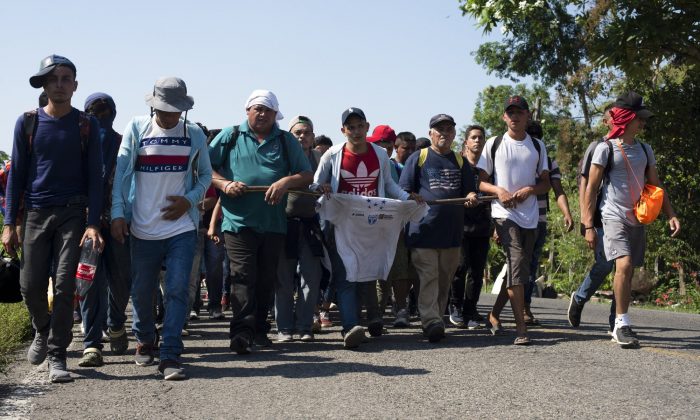 Central American migrants, part of a caravan hoping to reach the United States border, walk on a road in Frontera Hidalgo, Mexico, on April 12, 2019. (Isabel Mateos/Photo via AP)
Americas

MEXICO CITY—Mexican authorities said a group of about 350 illegal immigrants broke the locks on a gate at the Guatemalan border Friday, April 12, and forced their way into southern Mexico to join a larger group of migrants trying to make their way toward the United States.

The National Immigration Institute did not identify the nationalities of the migrants, but they are usually from Central America.

A similar confrontation occurred on the same border bridge between Mexico and Guatemala last year.

The institute said the illegal immigrants were acting in a “hostile” and “aggressive” way, and accused them of also attacking local police in Metapa, a Mexican village that lies between the border and the nearby city of Tapachula.

The group of 350 pushed past police guarding the bridge and joined a larger group of about 2,000 migrants who are walking toward Tapachula in the latest caravan to enter Mexico.

Claudia Jaqueline Sandoval, 43, from El Progreso, Honduras, was walking toward Tapachula with her 6-year-old daughter. Another son and daughter are already in the United States.

“I have been HIV positive for 16 years,” said Sandoval, but her reason for going north was not just medical treatment. “It has been two years since I heard from my son” in the United States, and money is scarce, she said.

There are already several groups of migrants in the southern border state of Chiapas who have expressed frustration at Mexico’s policy of slowing or stopping the process of handing out humanitarian and exit visas at the border.

A group of several hundred Cuban, African, and Central American migrants have been waiting at the immigration offices in Tapachula for documents that would allow them to travel to the United States border, where most plan to request asylum.

Some members of that group have scuffled with immigration authorities and broken windows at the offices in recent days, accusing officials of making them wait too long for papers.

And another group of an estimated 2,500 Central American and Cuban migrants have been stuck for at least a week further west in the Chiapas town of Mapastepec, also waiting for papers.

A man named Carlos from Honduras arrived in Tijuana on Jan. 29 under the new policy, called the Migrant Protection Protocol (MPP). He is the first of many asylum seekers from the Northern Triangle who will be sent back to Mexico until their immigration court date in the United States—at which point, they will be allowed to enter the country to attend their hearings.

Honduran migrant Marlon Ariel Mendez was part of a group of asylum-seekers who were returned to Tijuana on Jan. 30. Mendez, 19, told reporters he was glad to be back in Mexico, after being detained in an immigration detention facility.

“Thanks to God, I didn’t want to be there [in detention], above all else because of the food,” he said.

Then-Secretary of Homeland Security Kirstjen Nielsen’s visit to San Diego’s San Ysidro Port of Entry kicked off the start of the policy on Jan. 29. That day only one asylum seeker walked back through the port gates, although the United States has said it will send 20 per day.

In fiscal year 2017, border patrol apprehended 94,285 family units from Honduras, Guatemala, and El Salvador at the Southern border. Of those, 99 percent remain in the country today, according to the Department of Homeland Security.

So far, the policy is implemented in San Diego’s San Ysidro Port of Entry, the busiest border crossing in the country, and has expanded to other ports of entry at the border. Thousands of migrants from the Northern Triangle countries arrived in nearby Tijuana last year. It’s also believed to be the destination of the latest Honduran caravan headed north.

Cover said local coyotes also tell minors they have a better chance of entering the United States if they go alone.