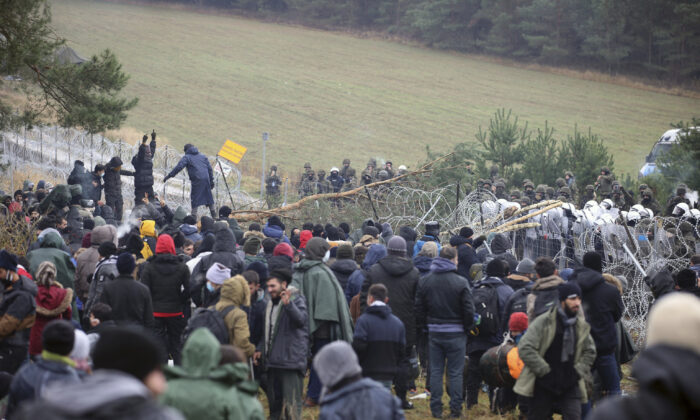 Migrants from the Middle East and elsewhere gather at the Belarus-Poland border near Grodno, Belarus, Monday, Nov. 8, 2021. (Leonid Shcheglov/BelTA via AP)
Europe

Hundreds if not thousands of illegal immigrants sought to illegally cross the border from Belarus into Poland on Monday, with some cutting razor wire fences and using tree branches and small trees to try and climb over. The development is an escalation of a crisis along the European Union’s eastern border that has been simmering for months.

Belarus has been accused of weaponizing illegal immigration against the EU for its own political gain.

Poland’s interior ministry said it had rebuffed what it called an illegal invasion and claimed the situation was under control. The country’s Defense Ministry posted a video showing an armed Polish officer using a chemical spray through a fence at men who were trying to cut razor wire. Some migrants threw objects at the police.

Video footage from Belarusian media showed people using long wooden poles or branches to try to get past a border fence as police helicopters circled overhead.

Polish Defense Ministry video taken later Monday showed the immigrants settling in for the night by the border, having put up scores of tents and cooking meals.

Stanisław Żaryn, a spokesman for the Polish Minister of Interior and Special Services Coordinator Mariusz Kaminski, said a large column of illegal immigrants was heading towards the border crossing and called it the largest recorded mass attempt to enter Poland by force, according to Poland In.

“There are large groups of migrants in the area of our border, which are fully controlled by the Belarusian security services and army. A coordinated attempt to massively enter the territory of the Republic of Poland by migrants used by Belarus for the hybrid attacks against Poland has just begun,” Zaryn said in a statement.

Zaryn accused Belarusian leader Alexander Lukashenko of acting to destabilize Poland and other EU countries to pressure the bloc into dropping its sanctions on Minsk and stopping its support for the Belarusian government opposition.

“We are in constant contact with our partners—both in NATO and the EU. Our Allies have repeatedly expressed their support for Poland’s actions aimed at securing our border,” the spokesperson said.

Poland’s border with Belarus is also the external border of NATO and the European Union.

Piotr Mueller, a Polish government spokesperson, said 3,000 to 4,000 immigrants were next to Poland’s border on the Belarusian side.

The massing of people at the border appeared to rev up the crisis that has been going on for months in which the autocratic regime of Belarus has encouraged illegal immigrants from the Mideast and elsewhere to illegally enter the European Union, at first through Lithuania and Latvia and now primarily through Poland.

Anton Bychkovsky, the spokesman for Belarus’ State Border Guard Committee, told The Associated Press that the immigrants at the border are seeking to “exercise their right to apply for refugee status in the EU.” Bychkovsky insisted they “are not a security threat.”

Belarusian opposition leader in exile Sviatlana Tsikhanouskaya said on Twitter that “Belarus’ regime escalates the border crisis—migrants are pushed to the EU border by armed men. Lukashenka is fully responsible for the hybrid attack on Poland, Lithuania, and the EU.”

Belarus' regime escalates the border crisis – migrants are pushed to 🇪🇺 border by armed men. Lukashenka is fully responsible for the hybrid attack on 🇵🇱🇱🇹🇪🇺. The migrant smuggling, violence & ill-treatment must stop. Strong 🇪🇺 response is needed. #UNSC should discuss this crisis. pic.twitter.com/GhoWGWKZdH

Polish Defense Minister Mariusz Blaszczak said on Twitter that more than 12,000 soldiers have been deployed to the border and a volunteer Territorial Defense force was put on alert.

Polish Prime Minister Mateusz Morawiecki said on Facebook that “The border of the Polish state is not just a map line. This border is sanctity for which the blood of generations of Poles has been shed!”

European Commission President Ursula von der Leyen said in a statement that “Belarus must stop putting people’s lives at risk” and called on European Union members to “finally approve the extended sanctions regime on the Belarusian authorities responsible for this hybrid attack.”

EU commissioners will travel in the coming days to the main countries where the immigration originates and to those countries traversed by illegal immigrants to ensure that they take actions preventing “their own nationals from falling into the trap set by the Belarusian authorities,” von der Leyen said in the statement.

Moreover, the EU will explore options working with the United Nations “to ensure that migrants can be safely returned to their country of origin, with the support of their national authorities,” she said.

NATO expressed their concern with the situation on the Polish-Belarusian border in a statement saying “We urge Belarus to respect international law. We are witnessing a wave of migrants trying to get to the territory of the allies via Belarus. NATO continues to closely monitor the situation that is putting pressure on our allies, Lithuania, Latvia, and Poland,” reported Polish Press Agency

The United States is concerned about the disturbing images and reports from the Polish-Belarusian border, said Ned Price, spokesman for the U.S. State Department.

“The United States strongly condemns the Lukashenka regime’s political exploitation and coercion of vulnerable people, and the regime’s callous and inhumane facilitation of irregular migration flows across its borders,” Price said at a press briefing on Monday.

“As long as the regime in Belarus refuses to respect its international obligations and commitments, undermines the peace and security of Europe, and continues to repress and abuse people seeking nothing more than to live in freedom, we will continue to pressure Lukashenko and will not lessen our calls for accountability,” he added.