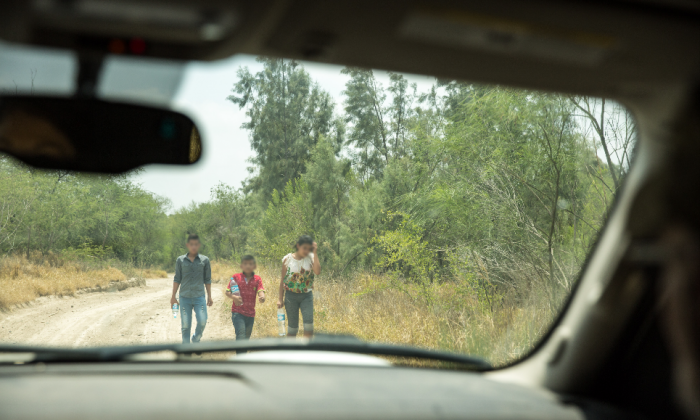 Border Patrol encounters a group of unaccompanied minors who just crossed the Rio Grande from Mexico into the United States in Hidalgo County, Texas, on May 26, 2017. (Benjamin Chasteen/The Epoch Times)
Trump Presidency

WASHINGTON—More than 10,000 minor children who crossed the southwest border illegally, without a parent or guardian, are currently in the custody of Health and Human Services (HHS).

The vast majority (more than 90 percent) hail from the Central American countries of Guatemala, Honduras, and El Salvador. Most are aged between 15 and 17.

“The [program] was never intended, however, to be a foster care system,” Wagner said on a May 29 media call.

He said the program runs at an immediate cost to the federal taxpayer of over $1 billion a year.

A total of 21,720 unaccompanied minors were apprehended on the southwest border between Oct. 1, 2017, and March 31, according to the Department of Homeland Security. An additional 4,605 were deemed inadmissible at U.S. ports of entry.

Wagner said that under a current immigration loophole, HHS is forced to release minors from Central America into the United States rather than return them to their country of origin, if they do not qualify for another immigration benefit.

The loophole is the Trafficking Victims Protection Reauthorization Act (TVPRA), which has a provision that says a minor from a noncontiguous country cannot be turned back to Mexico or flown back to their home country—even if the individual is not a victim of trafficking, nor if their age, identity, credible fear status, or criminal background cannot be verified.

“Aliens arriving illegally from Mexico, by and large, can be processed quickly and returned home together quickly. Aliens arriving from Central America—that is not the case. And they are entitled under these current loopholes to be released inside the United States. Many [are] never to be seen or heard from again,” he said.

The administration wants Congress to amend the TVPRA so that minors who are not genuine trafficking victims can be quickly returned home or removed to safe third countries.

“This is an example of open borders,” Wagner said. “And you can see that the UAC [unaccompanied alien children] program is being utilized because it has an economic benefit to the people who are coming here, often with the aid and assistance of smugglers.”

When a child under the age of 18 enters the United States illegally, they often seek out Border Patrol, which is then mandated under the Flores Settlement Agreement to transfer the minor to HHS’ Office of Refugee and Resettlement within 72 hours.

The administration wants Congress to terminate Flores—a Clinton-era settlement of a class-action lawsuit—and fold relevant care provisions into the TVPRA.

HHS is mandated to temporarily house the minors and then release them to a sponsor within the United States. Most are released within an average of 57 days in HHS custody.

“So HHS has been put in the position of placing illegal aliens with individuals who helped arrange for them to enter the country illegally in the first place,” Wagner said. “This makes the immediate crisis worse and creates an economic incentive for further violation of federal immigration law.”

Many minors are brought into the United States by family members who pay to smuggle them across the border illegally. Often, the family members are also in the country illegally. HHS is then forced to house the minors and pay to transport them to where their family members live.

“We’re not able to deny placement just because parents or family members are in the country illegally,” Wagner said.

Trump wants to clarify the unaccompanied minor designation and remove the benefits for minors who are living with a parent here illegally. Those benefits include access to food stamps, medical care, and social services.

Wagner said HHS and the Department of Homeland Security have just signed a memorandum of agreement that will give more information to HHS about the unaccompanied minor.

“We think this is going to be a major step forward, as it provides information to HHS so that we can more thoroughly vet the unaccompanied alien children for a background in gang activity,” Wagner said.

The unaccompanied minor program has been used as a pipeline for recruitment for the MS-13, or Mara Salvatrucha, gang. The gang sends members to the United States from El Salvador as unaccompanied minors, and it recruits from recently arrived minors from Central America.

Peter Fitzhugh, deputy special agent in charge of ICE Homeland Security Investigations (HSI) in New York, said MS-13 membership has expanded since 2014, coinciding with a flood of thousands of unaccompanied minors across the southwest border.

These four counties have taken in around 30,000 minors in their communities and schools in the last several years.

All four counties are struggling with the proliferation of MS-13 gang violence. An ICE operation last year resulted in the arrest of 214 MS-13 gang members, 30 percent of whom originally entered the United States as unaccompanied alien children.

“We will conduct a fingerprint-based background check on every sponsor, to further ensure there’s never an incident of kids being released into human trafficking rings as regrettably occurred in 2016 under the previous administration,” Wagner said.

“Plus we have the problem of people fraudulently claiming to be parents, when in fact they’re not. Actually matching the family relationship is a challenge for us.”

Miller said Democrats are “exclusively and solely” to blame for keeping the current loopholes open.