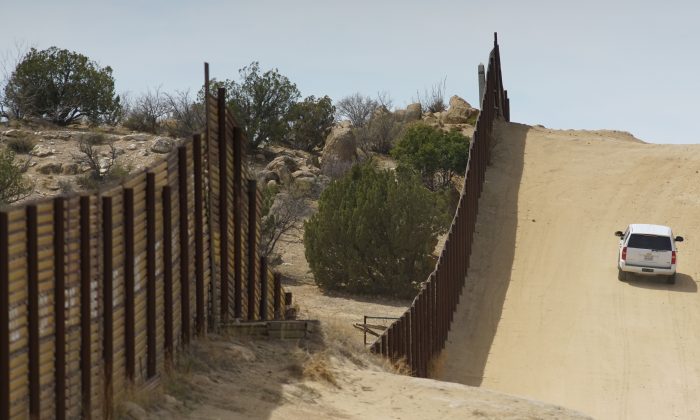 A truck drives past the U.S.-Mexico border fence in Jacumba, California on April 6, 2018. (Sandy Huffaker/AFP/Getty Images)
Crime and Incidents

Agents with the CBP’s El Centro Sector apprehended the illegal alien, who was not identified, and accused him of setting fires in the Jacumba Wilderness last week.

When Border Patrol agents responded, “they located an unknown individual in the vicinity of the reported fire, attempting to start another fire,” according to CBP in a news release. “Agents attempted to extinguish the second fire but had little success.”

Then, the Bureau of Land Management provided dispatched an aircraft with firefighting capabilities to stop the wildfire, and the “combined resources and firefighting efforts were able to control the fires” the next day, the agency said.

The accused arsonist was identified as an 18-year-old male Mexican national who was arrested for illegally entering the United States and was transported to the El Centro processing location. The teen was “caught in the act” of trying to start a wildfire, the agency said.

The Bureau of Land Management will now be investigating the wildfires as arson, according to the news release.

“Our environment and natural places are national interests that all Americans hold dear,” Chief Patrol Agent Gregory K. Bovino said in a statement. “I would like to thank our partners at Bureau of Land Management as they work tirelessly to conserve and protect the fragile Jacumba Mountains Wilderness area; the location where this undocumented migrant purposefully set fire to endangered Big Horn Sheep habitat.”

The Jacumba Wilderness, which spans about 31,000 acres and is managed by the bureau, is located in California’s Imperial County, which is located along a remote stretch of the U.S.-Mexico border.

In a release issued earlier this month, Border Patrol said that about 9,728 illegal immigrants with prior criminal convictions have been apprehended in the United States during the fiscal year 2021 to date. That represents a sharp increase over the past three years, while during the fiscal year 2020, only 2,438 illegals with criminal convictions were arrested.

The arrest of the alleged Mexican arsonist comes as the Biden administration faces criticism of how it struggled to contain a surge of Haitians who amassed underneath a bridge in Del Rio, Texas, prompting concerns of the spread of transmissible diseases.

Homeland Security Secretary Alejandro Mayorkas on Sunday said that some 12,000 of 17,000 Haitian illegal immigrants were effectively released into the interior U.S. in recent days with court dates.