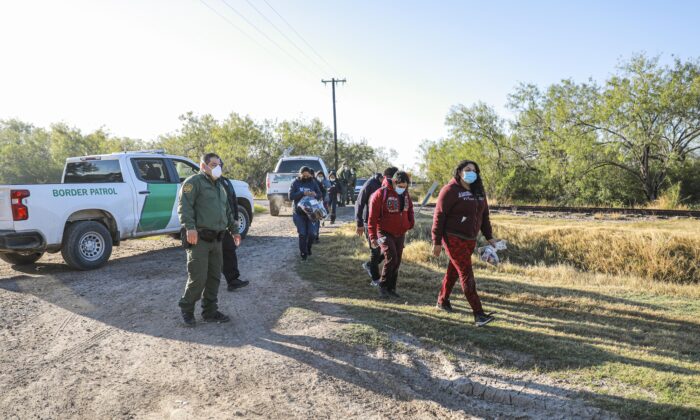 U.S. border agent encounters with illegal immigrants at the U.S.-Mexico border soared in January when compared to the same month in 2021, newly released data show.

President Joe Biden’s administration also released over 63,000 illegal aliens into the U.S. interior during the month of January, according to the data, which was outlined in court documents.

The Department of Homeland Security (DHS) has not yet formally released the number of encounters from the first month of the year but government lawyers revealed the data under court order to a federal judge.

Border Patrol agents and other encounters between authorities and migrants at the border in January totaled 153,941, the government said.

January is typically one of the months where fewer people travel to the United States because of more challenging weather conditions and other factors, according to Steven Kopits, president of Princeton Policy Advisors, a conservative consultancy.

The number reported in court was higher than the firm forecast, which was already high because of the Biden administration’s more relaxed immigration enforcement policies.

“Both our fiscal and calendar year forecasts stand at 2.1 million, and therefore the January data suggest actuals for the year may exceed even our dire expectations,” Kopits told The Epoch Times in an email. “Of course, we are still in the early part of the year, and border conditions could improve if the Biden administration chooses more stringent enforcement policies. Taken at face value, however, reduced January border encounters are better construed as a cause for alarm than any demonstrated improvement in border control.”

A White House spokesman didn’t respond to a request for comment.

The report was made as part of a case that forced the Biden administration to restart the “Remain in Mexico” program, which makes some illegal immigrants wait in Mexico for their asylum claims to be heard.

The program was ended by Biden’s Homeland Security secretary, Alejandro Mayorkas, but a federal judge found he hadn’t properly considered the benefits of the program. According to a department delivered during the Trump era, the program helped deter illegal immigration.

Court papers also show that the DHS expelled some 86,226 but released approximately 62,500 others into the U.S. interior under parole or other powers.

The filing came after Mayorkas and Border Patrol Chief Raul Ortiz were confronted by agents while visiting the border. Agents said they were upset with the administration’s handling of immigration enforcement.

Mayorkas said in a video released by the DHS on Feb. 11 that he appreciated the agents expressing their views, though several did so “unprofessionally.”

“But the substance of what was communicated really called for action and we’re jumping on it, and we’ve got a lot of work to do,” he said.

Mayorkas said the broader DHS workforce “may not be aware of the pressure that the Border Patrol agents are under, and field operations as well, in terms of the level of encounters at the border and the fact that we need to get more people out in the field.” He said agents are struggling with morale and it’s his responsibility to address that.