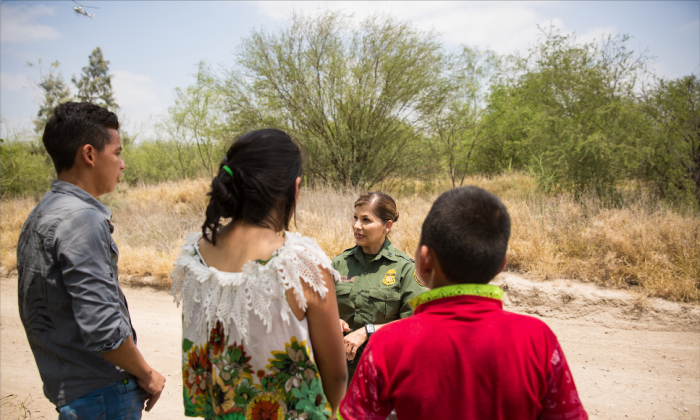 Border Patrol agent Marlene Castro speaks to a group of unaccompanied minors who just crossed illegally from Mexico into the United States in Hidalgo County, Texas, on May 26, 2017. (Benjamin Chasteen/The Epoch Times)
US News

WASHINGTON—The massive influx of unaccompanied minors illegally crossing the southwest border into the United States brings many additional challenges, including serious crime, according to a report released by Judicial Watch on July 10.

Judicial Watch used the Freedom of Information Act to obtain documents from Health and Human Services (HHS), the agency that temporarily houses unaccompanied minors after they are apprehended by Border Patrol.

The documents include “significant incident reports” processed by HHS for the six-month period from May to November 2014.

Unaccompanied minors in HHS custody during that time period included admitted murderers, rapists, drug smugglers, prostitutes, and human traffickers, according to the report.

For the whole of fiscal year 2014, there were 24,680 significant incident reports filed, according to Judicial Watch.

The HHS records reveal that an unaccompanied female, once reunited in the United States, told her mother she was pregnant.

“When the client’s mother asked her who the father of her child is, the client reluctantly replied that she was sexually assaulted by her guide several times,” the HHS report states.

Border Patrol agents have said that parents sometimes put their female children on birth control pills prior to the journey in anticipation that they will be raped along the way.

One girl, in October 2014, was given an abortion in the United States after being raped during her trek north, according to the HHS records.

The vast majority (almost 80 percent) of unaccompanied minors are from the Central American countries of Honduras, El Salvador, and Guatemala.

Regardless, Homeland Security determined that about 60 percent of the children initially determined to be “unaccompanied alien children” are released by HHS’ Office of Refugee Resettlement within an average of 57 days to a parent already living illegally in the United States.

The counties absorbing the greatest number of these children are Harris County in Texas, Los Angeles County, Suffolk County in New York, and Miami-Dade County in Florida.

These four counties have absorbed more than 35,000 unaccompanied minors into their communities and schools in the last 3 1/2 years.

All four counties are also struggling with the proliferation of MS-13 gang violence.

Joe Kolb, executive director of the Southwest Gang Information Center, said that unaccompanied minors become targets of MS-13 in the United States, if they haven’t already in their home country.

“Every single one of these kids is either a potential MS-13 recruit or a potential victim of MS-13,” he said.

The HHS documents show that a young male was forced to join MS-13 while in his home country.

“Minor also shared the gang members would tell him to sell the drugs. Minor shared the first time they made him sell drugs they showed him their gun. Minor reports he understood if he didn’t sell drugs he would be killed.”

Kolb said the problem in the United States is the sheer volume of minors being placed into communities with no warning. He said, aside from schools being totally overwhelmed, the minors create a “backfilling effect” for MS-13 recruitment.

“For example, 25 MS-13 members were arrested in Suffolk County. Well, at the back end, we’ve placed almost 1,000 unaccompanied minors there—who are potential recruits—so we’re not eliminating what I call the ‘backfilling effect’ of the gang,” Kolb said.

Suffolk County, New York, has absorbed more than 5,000 unaccompanied minors since the beginning of fiscal year 2014, according to HHS.

“And that’s the absurdity of this. And that’s why ICE needs to stay in existence,” Kolb said. “It’s a purely imbecilic proposal to even present that [ICE be abolished]. It’s made by naive people who have no idea of the complexity of this issue.”

The surge across the southwest border in 2014 was caused partly by the misinterpretation of former President Barack Obama’s 2012 executive order giving illegal aliens who were brought into the country as children a work permit and protection from deportation, known as Deferred Action for Childhood Arrivals (DACA).

Kolb said a lot of advocates were promoting the idea that just by virtue of showing up, minors would become eligible for DACA.

“And that’s obviously not the case,” he said. “But again, when you have 50,000 kids showing up, you have to do something with them. You can’t turn a 12-year-old kid around at the border and say, ‘OK, walk home now.’

“So we were victimized by our own policy—that’s probably the best way to put this.”

Kolb said amending the Trafficking Victims Protection Reauthorization Act would help. He said the act needs to state that a child cannot be placed with an illegal alien.

“And I guarantee you’ll see—maybe not an entire dry-up of this—but you’ll see quite a bit of these kids not coming up here anymore, because they won’t have a legal sponsor to be placed with.”