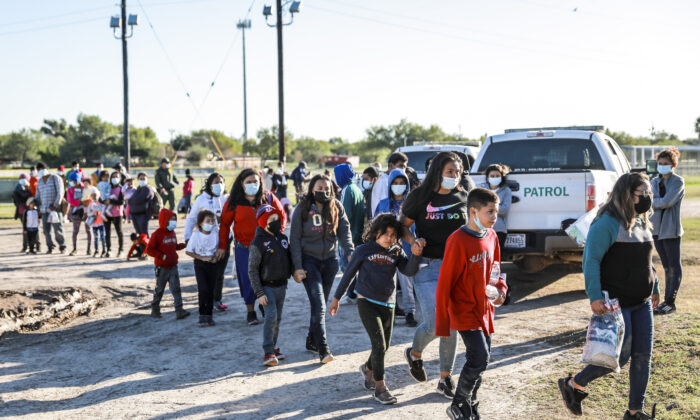 Unaccompanied children who cross the U.S. border alone are potentially being placed in dangerous situations due to the lax vetting of the adults they’re being handed off to, says a whistleblower who works with a company that transports the minors around the United States.

An unaccompanied child who crossed the U.S. border illegally without a parent or guardian is processed by Border Patrol and then transferred to Health and Human Services (HHS). HHS’s Office of Refugee Resettlement is responsible for placing the child with a vetted sponsor in the United States—usually a parent or relative, but not always, says the whistleblower.

“There’s no proper vetting right now saying, ‘Hey, these kids are really related to this person.’ No. That could be a child offender, sex offender wanting to take one of these kids into their homes—and the government will let it happen,” the whistleblower told Savanah Hernandez, a Texas-based reporter who runs a podcast called Rapid Fire.

The whistleblower alleges in the interview that he works for MVM, Inc., a Virginia-based private security company that contracts with the federal government to escort children throughout the United States from border regions.

He estimates the company is currently transporting between 2,000 and 5,000 children every week from Texas to sponsors around the country. They often travel at night and to small, regional airports.

HHS started releasing data on the number of unaccompanied minors it was housing in March 2021 as the volume overwhelmed border facilities, which aren’t designed as shelters for children.

By April last year more than 20,000 children were in HHS custody at one time, waiting for sponsor placement—at a taxpayer cost of at least $60 million per week.

HHS had to open several emergency holding centers, including converted convention centers in Dallas, San Antonio, and San Diego, military bases in border states, and structures in interior states such as Pennsylvania and Michigan.

“This Administration’s goal is to move unaccompanied minors who arrive at our borders out of DHS [Department of Homeland Security] custody and into HHS facilities, and ultimately place them with vetted family members or sponsors as quickly and safely as possible,” HHS states in an email accompanying its statistics.

Once in HHS custody, an unaccompanied child will provide a caseworker with the name and contact for their sponsor and the worker will reach out to the sponsor to verify him or her, the whistleblower said.

“But we’re not allowed to bring these things up. As long as it’s a person who shows up and gives you the proper documentation, we leave the child.”

He said the children tell him they meet their sponsor through Facebook, or a social media app.

“Last week a co-worker had to take a teenage girl with a male sponsor in his 40s that they had never met before. Only FaceTime a couple times while she was in the [HHS] shelter,” the whistleblower told The Epoch Times via Hernandez on Aug. 25.

“Child sex trafficking is the number one thing we all fear.”

In another case, a woman in her 30s came to pick up two unrelated boys in San Antonio.

“They still somehow have the same sponsor. And you know, things run through your head and you’re like, ‘Hey, they’re not related. How did they meet?'” he said.

“When we first started doing this, they were always family members. And a lot of times now, kids will say—or we find out ourselves—that they’re not related.

“In the beginning, we can easily tell that it was the family, because they would cry, they would hug them. But now it’s no more crying, no more hugging, it’s just ‘Hey, I’m here to pick you up.’ And that’s it. They won’t look at the kid. They will be upset that they have to show up to the airport.”

The whistleblower said workers such as him can alert their supervisor at MVM if they think a sponsor isn’t suitable or properly vetted, but “they hardly ever listen to our concerns when it comes to sponsors. They like to remind us our job is to escort and that’s it.”

MVM told The Epoch Times that “any questions about the vetting of families or sponsors should be directed to the federal government.”

HHS didn’t respond to questions from The Epoch Times.

HHS outlines on its website that sponsors are required to undergo a background check and a criminal public records check, “and in most cases, a sex offender registry check.”

Sponsors who are unrelated to the child or not immediate family members, are also fingerprinted, according to the policy.

The agency states that it sometimes also conducts checks on other adults living in the household.

Once a child is placed with a sponsor, he or she then goes through immigration proceedings.

“At first it was going great. But ever since the Biden administration, as time’s gone by, it’s just too… It’s a mess. There’s no way of explaining what’s going on here except that it’s a big mess,” the whistleblower said.

“The kids will say, ‘Hey, they promised us $2,000 after two or three months of being with my sponsor, and I can’t wait till they buy me this with that money.'”

The rise in the number of unaccompanied minors raises concerns over a repeat of a 2014 incident in which HHS’s Office of Refugee Resettlement placed eight children into the hands of traffickers, according to a report by the Senate Permanent Subcommittee on Investigations, released in 2018.

The Biden administration has been criticized for fueling a rush to the border after quickly rescinding many of the measures the Trump administration had put in place to stem illegal immigration.

“The Biden-Harris Administration is committed to implementing an immigration system that is humane, orderly and lawful. The Administration is monitoring the border and marshalling all corners of the government to find compassionate and fair solutions,” an email from HHS states.

Since President Joe Biden took office, the number of unaccompanied children apprehended at the border jumped to almost five times the number encountered in 2020.

Border Patrol agents have apprehended a record-breaking more than 257,000 unaccompanied children at the border from January 2021 up through July 2022.

The vast majority (80 percent) are from the Central American countries of Guatemala, Honduras, and El Salvador, according to data from Customs and Border Protection (CBP).

Mexican nationals make up 15 percent of the unaccompanied minor population, and the remainder hail from other countries that CBP doesn’t identify on its website. Two-thirds of unaccompanied minors are male and 72 percent are aged 15, 16, or 17, according to HHS data.

Most often, the child’s parents are already living illegally in the United States and they’ve paid a smuggler to bring their child across the border.

“The kids tell us about it all the time. We heard a story last week where a sponsor had to pay double so they wouldn’t rape their niece,” the whistleblower said.

The whistleblower said the increased number of unaccompanied children requiring transport around the country has also meant MVM has rushed its hiring process.

He said some new employees don’t undergo a background check until months after they’ve been hired. It took more than six months for his own background check to be completed, the whistleblower said.

“A lot of people get hired and their background hasn’t even come in yet. They’ll get emails a month or two months into the job saying ‘Hey, you need to do your background,'” he said.

“It’s crazy because [they] could be a child offender, could be a bad person. And they have access to kids every day.”

“Regarding our personnel, all our employees are vetted, including background checks, and trained prior to beginning work,” MVM stated in an email to The Epoch Times.

The whistleblower said MVM employees have also been handing over children to adults who aren’t the designated sponsor on the paperwork provided by HHS.

“These kids are being sent off with neighbors, with people who are nowhere near related to these kids,” he said, “Because the sponsor didn’t feel like going.”

A supervisor from MVM recently emailed a reminder to employees to ensure children are only being given to designated sponsors and that their identification is checked properly, according to the email provided by the whistleblower and reviewed by Hernandez.

In response to this allegation, MVM told The Epoch Times, “In carrying out this responsibility, we follow rigorous protocols to ensure the safety of all individuals temporarily in our care, including verifying the identity of all sponsors prior to the transfer of custody.”

Border Patrol agents in Texas’s El Paso region have discovered more than 665 adult illegal aliens who tried to pose as unaccompanied minors to gain expedited entry into the United States in the past 10 months, according to CBP.

Often, the adults will have fake documents showing their age as a minor. El Paso agents recently apprehended seven adults aged from 19 to 26 who tried to pass as children.

The whistleblower said he transports minors that look like adults and he’s told by other children that they lied about their age.

“There’s no way of knowing, a lot of the times they got more facial hair than I do. They got tattoos,” he said.

“A lot of the times the kids will tell us that they threw their papers away [before crossing the U.S.–Mexico border] because they stand a better chance of coming into the country without their papers.”

HHS discovered 105 children the agency later determined were actually adults during fiscal year 2021, according to its website.

Unaccompanied children are currently in HHS custody for an average of four weeks before they’re handed over to a sponsor. Children are accommodated in one of approximately 200 state-licensed facilities and programs in 22 states.

During the past two years, almost 30,000 unaccompanied minors have been placed with sponsors in Texas, while Florida and California received more than 20,000 minors each, according to HHS data.

During the same period, between 10,000 and 14,800 unaccompanied children have been placed in each of New York, New Jersey, Virginia, and Maryland.

In fiscal year 2021, $2.14 billion was transferred to the unaccompanied minor program within HHS, according to the agency’s website.