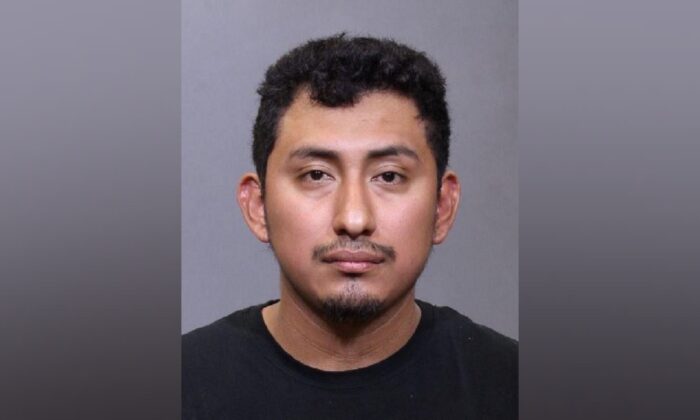 Jeff Louderback
Jeff Louderback is a national reporter for The Epoch Times who is based in Ohio and covers U.S. Senate, U.S. House and gubernatorial races in Ohio and surrounding states.
View profile
Follow
and Zachary Stieber

Gerson Fuentes, 27, will remain locked up for now on two felony counts after his arraignment. No bond hearing has been scheduled.

Fuentes raped a 10-year-old girl, including at least once when she was 9, according to prosecutors.

Fuentes confessed to the rapes, and the minor identified him as the man who impregnated her, according to court documents.

Bryan Bowen, a lawyer hired by Fuentes’s family, told reporters after the hearing that he will fight for bail for his client because everyone is entitled to a presumption of innocence.

The status of Fuentes, who has been described by both local and federal officials as being in the United States illegally, means he isn’t a flight risk because he could be detained at any time by immigration officers, Bowen said.

He confirmed that Fuentes is a Guatemalan national and illegal immigrant who has been in the country for five to 10 years.

Columbus Police Department officers have said that Fuentes waived his rights and confessed to raping the girl, who hasn’t been named because she’s a minor.

Bowen said he’s concerned that Fuentes’s lack of fluency in English could have contributed to him not understanding the questions and what he was saying.

Fuentes, who appeared by video at the hearing, is depressed and afraid, his lawyer said. Bowen met with his client at the detention facility for an hour before the hearing.

The girl was raped at least twice this year, the first time as early as January, according to charging documents. She traveled to Indianapolis, Indiana, to have an abortion, according to a Columbus detective and an abortion report filed by Dr. Caitlin Bernard, who performed the procedure.

Ohio law restricts abortions at six weeks of pregnancy but has an exception for abortions necessary “to prevent a serious risk of the substantial and irreversible impairment of a major bodily function of the pregnant woman.”

Ohio officials have said the girl fit that exception, meaning she could have had the abortion in Ohio.

Indiana law is less restrictive—abortion is legal through 22 weeks of pregnancy—though lawmakers are weighing a new bill that would ban all abortions unless the life of the mother would be substantially impaired, or in cases of rape or incest.

“We have an opportunity to protect the lives of unborn children following the historic Supreme Court decision last month. As such, we are introducing legislation that will limit abortions in Indiana while still providing necessary exceptions and boosting support for mothers and babies,” Indiana Senate President Pro Tem Rodric Bray, a Republican, said in a statement.

Bernard wrote in a recent op-ed: “As states move to severely limit abortion care or ban access entirely, health outcomes for girls and women will get worse.

“Patients will be forced to find care in faraway, unfamiliar places; to continue dangerous, traumatic or unwanted pregnancies; to turn to desperate measures. Some won’t be able to access care until it’s too late.”