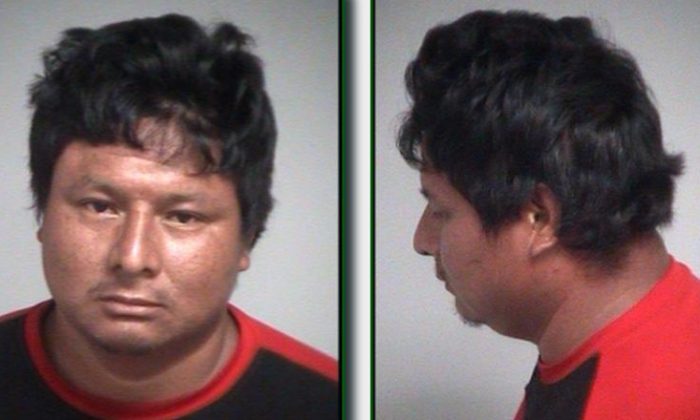 A Guatemalan national was arrested after illegally entering the United States and breaking into a Florida woman’s home and attacking her.

Samuel Hernandez, 32, told police that he traveled from Guatemala to Mexico to illegally enter the United States, meeting men there who offered to smuggle him into the country if he paid off his debt to them.

A police report said that Hernandez claimed that the traffickers told him to break into the Florida woman’s home and steal from her. When he was inside the home, he panicked when he heard her screaming.

Deputies, however, said that Hernandez cut the woman with a knife, WESH-TV reported. The unnamed woman said that the incident unfolded Saturday at around midnight in her Lake County home.

The woman said that she saw Hernandez open her bedroom door before coming at her with a knife, allegedly trying to stab in the heart, the WESH report stated. The woman’s husband woke up and fought him off. He tried to run, but he stumbled down the stairs instead.

When police arrived, the victim’s husband and brother-in-law had him subdued. Police then handcuffed him, the report said.

“I don’t know if he’s saying the truth or if he made it up because he was scared and didn’t know what else to say,” the victim said of Hernandez’s claims, Fox35 reported. “He was talking in Spanish saying that somebody sent him,” the victim added.

Mascotte Police said that they contacted the U.S. Immigration and Customs Enforcement agency, which now has a detainer on the suspect.

“The traffickers armed him with two knives and told him that if things did not go as planned, he was to either run out of the house or take someone’s life to ensure he carries out the mission,” a police report said, according to Fox News.

Police later said that he told officers he entered the United States with 15 other blindfolded men to “pursue a better life.”

“He met some male individuals in Mexico who offered to smuggle him into the country for 10,000 Mexican pesos [$522],” the police report said. “The individuals told him that if he did not have the money that he can work for them in lieu of paying the money. He was told it was a secured job in the United States but was not given any details regarding the type of work.”