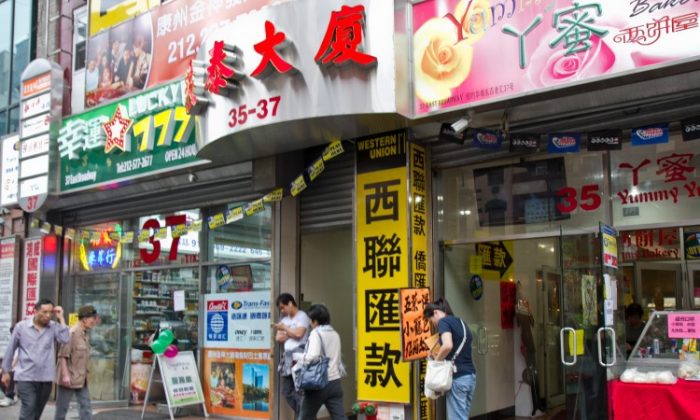 Authorities request a civil court to confiscate a building at 35-37 East Broadway in Manhattan’s Chinatown, due to it being used for illegal gambling operations for about two years. (Benjamin Chasteen/The Epoch Times)
US

They also arrested 11 people allegedly linked to organized Asian crimes, and an additional two people were arrested by the New York Attorney General’s Office for practicing medicine without a license. Around $163,000 worth of gambling proceeds were also confiscated.

The inconspicuous building stands squished between bustling shops at 35-37 E. Broadway in Chinatown. The storefront’s large red Chinese characters read Liang Tai Da Xia, which means the “Building of Peace and Food.” Passersby would never suspect the building is home to an extensive network of illegal gambling activities and dangerous medical practices.

“We know nothing,” said an employee at Lucky U, a small pharmacy next to the building who refused to give her name.

For the past two years, Liang Tai Da Xia has regularly hosted illegal gambling operations. Services included pai gow poker and computer-based slot machine games in nearly half of the building’s suites, according to the civil forfeiture complaint filed in a Manhattan federal court.

The building had been revamped to accommodate the illegal activities, including the creation of a ground-floor casino slots room. The surveillance cameras installed in the gambling areas were used to help the organization avoid police discovery.

The following July, investigators found security guards and a “banker” holding cash on behalf of the gambling enterprise, and gambling proceeds of $140,000 were confiscated.