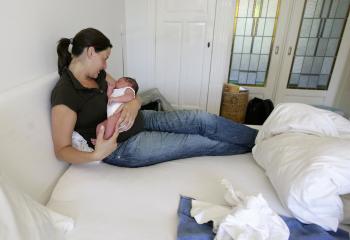 In Holland, one-third of children are born at home. That is quite a contrast to home births in the United States, where several states have laws restricting certain categories of midwives from assisting with home births. (Maartje Blijdensein/AFP/Getty Images)
News

James Goodlatte
James Goodlatte is a Pre & Post Natal Holistic Health Coach whose passion is to heal families by inspiring the use of natural methods and by building a team of fitness & health professionals to reduce infertility, avoid mechanized childbirth, and lower chronic disease in our infants. He is the founder of Fit For Birth, Inc. His articles have been published in a dozen languages and have sparked contact from Pre & Post Natal women as well as health professionals in over 150 countries.
View profile
Follow
biggersmaller
Print

Names and places have been changed to protect identities.

Thursday, July 23. It’s 10:32 p.m. and midwife Mary Anderson has already negated a few hospital childbirth policies as she illegally tends to a woman laboring in Rockville, Md. Melissa Trainer has been in labor for 45 hours and doesn’t know she has another three hours to go.

Trainer is one of almost 42,000 women in the nation this year who never intended to give birth in a hospital. Trainer says, “I researched health issues surrounding childbirth drugs, C-sections, and infant care and found that it was safer and less stressful to deliver my baby at home.”

In Maryland, however, it is illegal for a certified professional midwife (CPM) to tend to home births, although hospital-trained certified nurse midwives (CNMs) are permitted to do so. The way the law is written in 24 states deters women from having home births by banning CPMs, which leaves mothers who want completely natural births to labor alone or illegally ask for assistance from a CPM.

Although only 1 percent of all births occur outside the hospital in the United States, most women who labor and deliver at home swear it’s safer for both baby and mother. Moms that choose home births know there is mounting evidence that home births with midwives are safer, less complicated, and less expensive for low-risk pregnancies, even though they are outright illegal in many states and criticized by many doctors and hospital staff.

The World Health Organization says, “The midwife appears to be the most appropriate and cost-effective health care provider to be assigned to the care of normal pregnancy and normal birth.” The Independent reported in 2006 that the British Health Secretary began encouraging U.K. women to “challenge the assumption … that the safest place to give birth is in the hospital.”

One of the main reasons out-of-hospital births are being encouraged is due to the dangers of hospital interventions. A 2006 study in the Annals of Family Medicine concluded that women who gave birth surgically were found to be in “significantly worse physical health” than those who gave birth vaginally.

Midwife Anderson and her apprentice Amy Consuela can list seven specific hospital protocols that would have eliminated Trainer’s chances of delivering a healthy baby without unnecessary and dangerous interventions.

First, most hospital policies require a woman to deliver before 42 weeks of pregnancy. Trainer’s due date of July 9 would have made her July 23 natural labor extremely unlikely under the supervision of a doctor.

Second, instead of an IV unit inserted into her arm, Trainer is encouraged to eat and drink whatever she wants so that she can keep her strength and remain comfortable.

Fourth, rather than being restrained on her back, Trainer is encouraged to move in whatever way she pleases. All home-birth mothers are encouraged to alternate positions that help shorten and widen the birth canal so the baby can pass more easily.

Fifth, long labors with small progressions tend to worry hospital staff. Most hospital protocols would have required the drug Pitocin to “speed things up, as if they know better than mom and baby,” Consuela says.

The typical harsh pains created by Pitocin cause most women to ask for the sixth questionable hospital protocol, the needle that administers epidural anesthetic drugs into the spine. The Pitocin pains and numbing epidural “disable the natural birthing mechanism,” says Anderson.

C-sections, the seventh questionable hospital protocol, are now administered to about one–third of pregnant women in the United States. A large study of low-risk pregnant women published in the British Medical Journal in 2005 found that only 3.7 percent of low-risk women who planned home births ended up with C-sections.

“There is no way that [Melissa Trainer] would have delivered this baby naturally in a hospital,” replied Anderson, when asked “How likely would [Melissa] have delivered naturally in a hospital.” Anderson explained further, “It seems likely that [Melissa] would have been induced and she would not have been ready to deliver.  You can Pitocin till the cows come home, but the cervix must be ready.  It seems to me that [Melissa] was working out something mentally, and that’s not factored into hospital births.  I also took into account that [Melissa] was so healthy and vibrant.”  By delivering her baby at home, using the assistance of an unauthorized midwife, Trainer delivered a healthy 9 pound 3 ounce baby girl at 1:24 a.m. on July 24, without any unnecessary interventions.

James Goodlatte is the founder of Fit For Birth, Inc., and a Pre & Post Natal Holistic Health Coach.  His passion is to heal families by inspiring the use of natural methods and by building a team of fitness professionals to reduce infertility, avoid mechanized childbirth, and lower chronic disease in our infants.  Fit For Birth provides continuing education courses for fitness and birth professionals, as well as various personal training and health coaching programs for pre and postnatal women.

James Goodlatte
Follow
James Goodlatte is a Pre & Post Natal Holistic Health Coach whose passion is to heal families by inspiring the use of natural methods and by building a team of fitness & health professionals to reduce infertility, avoid mechanized childbirth, and lower chronic disease in our infants. He is the founder of Fit For Birth, Inc. His articles have been published in a dozen languages and have sparked contact from Pre & Post Natal women as well as health professionals in over 150 countries.
Website