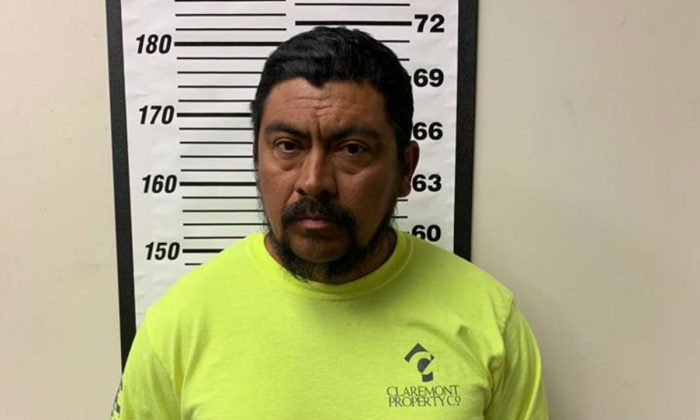 An illegal alien, who was repeatedly convicted for sexually abusing children, was arrested during an early morning traffic stop in Texas on Jan. 30, according to a police statement.

Marvin Yovani Mejia-Ramos, 50, gave a fake name to authorities when he was stopped for a traffic violation around 6 a.m. But he was arrested after an onsite fingerprint scan revealed his identity as a convicted felon who had served at least three stints in U.S. prisons and was back in the country illegally.

Mejia-Ramos was subsequently handed over to Immigration and Customs Enforcement (ICE) in Houston, where he remains pending his federal criminal prosecution for immigration violations, according to a statement from the federal agency.

He was deported in 2013 but returned in 2015, where he was arrested for driving while intoxicated (DWI) in the Houston area, again under a fake name.

Mejia-Ramos was previously granted voluntary return to Mexico twice in 1999, ICE said. The agency said illegal aliens who meet certain criteria may be permitted to voluntarily depart the United States and that their acceptance of a voluntary return means that the alien admits that they were illegally present in the country and agrees to be returned as soon as possible. Voluntary returns do not have the same legal consequences as an official removal or deportation.

“Mejia-Ramos is a very dangerous convicted criminal that is in our country illegally. Great job by our deputy that located him and is once again bringing him to justice,” Constable Rowdy Hayden from the Montgomery County Precinct 4 office said.

President Donald Trump has repeatedly warned about crimes committed against Americans by criminals who cross the border illegally in his efforts to build a physical barrier at the southern border.

“In the last two years, ICE officers made 266,000 arrests of aliens with criminal records, including those charged or convicted of 100,000 assaults, 30,000 sex crimes, and 4,000 violent killings,” the president said during a Jan. 8 speech to the nation.

“Last month, 20,000 migrant children were illegally brought into the United States—a dramatic increase. These children are used as human pawns by vicious coyotes and ruthless gangs. One in three women is sexually assaulted on the dangerous trek up through Mexico. Women and children are the biggest victims, by far, of our broken system.

“This is the tragic reality of illegal immigration on our southern border.  This is the cycle of human suffering that I am determined to end,” he said.

The federal government partially shut down on Dec. 22, after Congress failed to come to an agreement about funding. The president subsequently signed a short-term spending bill on Jan. 25 to temporarily reopen the government.

Democratic leaders in Congress refused to negotiate to fund for a border wall while the government was closed, calling it expensive and ineffective. Trump’s move to reopen the government is a temporary concession that returns the spotlight to House Speaker Nancy Pelosi (D-Calif.) and Senate Minority Leader Chuck Schumer (D-N.Y.).

On Jan. 31. Pelosi said she would not negotiate on funding for the southern border wall, going back on her promise to negotiate with the president.

“There’s not going to be any wall money in the legislation,” Pelosi told reporters on Jan. 31, reported The Associated Press.

The federal government has until Feb. 15 for negotiating long-term funding for border security.