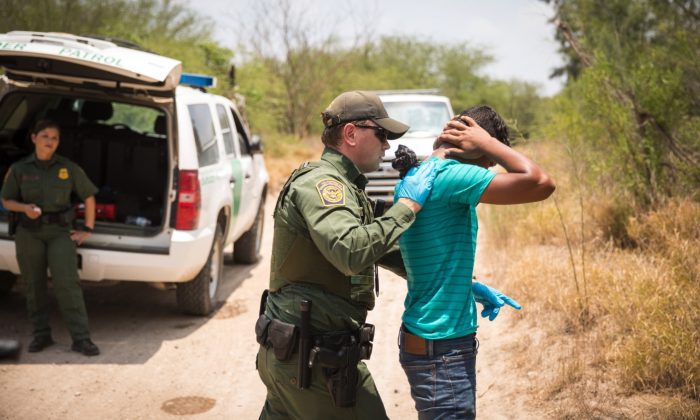 A Mexican national who allegedly pointed a loaded firearm at a border patrol agent was arrested and faces charges, including assault on a federal officer—a felony.

Hector Rodriguez-Chavez, 57, allegedly pointed a loaded pistol at a U.S. Border Patrol agent and fought to maintain control of the weapon until he was subdued with a Taser.

He has been charged with assault on a federal officer, a felony offense that carries a maximum penalty of 20 years in prison and a $250,000 fine, according to charging documents released by the U.S. Attorney’s Office of the Southern District of California.

Rodriguez also faces the charge of an alien in possession of a firearm, which carries a maximum penalty of 10 years in prison and a $250,000 fine.

According to the criminal complaint, a U.S. Border Patrol agent responded to a call-out at about 4:30 a.m. on Nov. 26 regarding a person crossing on foot from Mexico to the United States. The agent searched the area, which was about half a mile north of the United States/Mexico border, and 2 miles east of the Otay Mesa port of entry, and found Rodriguez-Chavez lying facedown in tall grass.

“As the agent drew near, Rodriguez turned and pointed a loaded pistol at the agent,” the complaint reads.

The agent and Rodriguez struggled for the gun, and even the help of two other agents was not enough to disarm the suspect, court documents said.

“The agent placed his body on Rodriguez’s right arm in an attempt to gain control of the pistol. Rodriguez resisted and the two wrestled for about a minute before two more agents arrived on the scene. Rodriguez ignored several verbal commands to relinquish the pistol and stop resisting. The second agent to arrive deployed a Taser to subdue Rodriguez and gain control over the pistol.”

Agents later found that he’d been deported back to Mexico at least five times before, dating back more than 20 years, according to the Washington Times.

“Assault on federal officers is one of the Department of Justice’s top priorities,” said U.S. Attorney Adam L. Braverman. “Our office is committed to vigorously prosecuting these cases.”

Border Patrol agents faced two other documented instances of violence this week, with ABC affiliate WXYZ Detroit reporting that in one case an agent was hospitalized after suffering an assault.

Both incidents occurred in Arizona, near the border, west of Tucson, on Nov. 27.

In one case, agents were trying to stop a human smuggling operation involving four male suspects, according to the report, citing the Border Patrol. At some point during the arrest, a 25-year-old Guatemalan national allegedly threw dirt at an agent’s face and used a belt with a large buckle attached to swing at the agent.

In the second incident, an agent and a canine partner tracked and confronted a 36-year-old illegal alien from Guatemalan. Border Patrol told the station that the suspect became combative and struck the agent several times.

The suspect was then subdued and arrested.

Border Patrol officials told the station in one of the two incidents, the agent was hospitalized with unspecified injuries and has since been released.

The agency did not specify which of the two cases required medical attention.