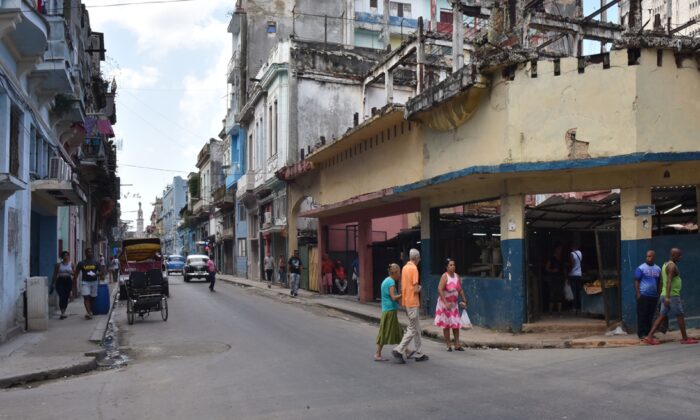 View of the 685 Neptuno street taken on Nov. 12, 2019 in Havana. (Adalberto Roque/AFP via Getty Images)
Viewpoints

Illegal? 50 US Leftists Get Political With Communists in Cuba

In early November, 50 U.S. leftists traveled to Cuba for meetings with communist organizations on the island.

The delegation, which included known members of the Freedom Road Socialist Organization and its satellite group LeftRoots, met with officials of a major international communist front organization, an auxiliary of the Cuban government, and several “non-governmental organizations.”

There should be major questions raised over the legality of this visit.

In June, the Trump administration announced new restrictions on U.S. citizens traveling to Cuba. Until then, Americans could travel to the island only under specific categories, which included organized group travel known as “group people-to-people travel.” That loophole—long exploited by U.S. communist groups—is now technically closed.

“Treasury Secretary Steven Mnuchin said in the statement that the restrictions are a result of Cuba continuing ‘to play a destabilizing role in the Western Hemisphere, providing a communist foothold in the region and propping up US adversaries in places like Venezuela and Nicaragua by fomenting instability, undermining the rule of law, and suppressing democratic processes.’

“The State Department announced that ‘going forward, the United States will prohibit US travelers from going to Cuba under the previous ‘group people-to-people educational’ travel authorization.'”

The 50 U.S. delegates arrived in Cuba on Oct. 30 to attend the “Anti-imperialist Meeting of Solidarity, for Democracy and Against Neoliberalism,” which took place in Havana from Nov. 1 to 3.

The conference was organized by the government-controlled Cuban Institute of Friendship with the Peoples, the Central Organization of Cuban Trade Unions, the Cuban Chapter of Social Movements, and the Continental Convergence for Democracy and against Neoliberalism.

According to the communist-controlled World Peace Council, the event was designed to build international opposition to the U.S. government’s attempts to isolate the Cuban communist regime:

“The meeting in Havana expresses the Cuban Revolution’s decision to respond to the demand of the political, social left-wing and the Solidarity Movement with Cuba that our country continues to be a meeting point of the peoples struggles in our continent.

“We have proposed the event to be a real contribution to confronting the current counterrevolutionary offensive of US imperialism, to the search for the widest possible unity of the leftist forces in the region and to strengthening militant solidarity with the just causes defended by the peoples. In the current political situation, marked by the aggressiveness of the Trump administration, new ways will be sought to reinforce solidarity with these causes in the world, mainly in our region. …

“The growing hostility against Cuba and other countries in the region, the judicial persecution of progressive leaders, the imposition of recycled neoliberalism, are distinctive features of the current North American policy towards Latin America and the Caribbean that awaken the fighting capacity of Latin American and Caribbean peoples.

“In the same way, the mobilization for the occasion of hundreds of social fighters, political leaders, intellectuals, peasants, women, indigenous people, solidarity activists, among others; will constitute a formidable encouragement to the heroic resistance of the Cuban people, determined to defeat … the blockade and to carry forward the updating of its economic and social development model.”

Does this sound political to you? Does it sound like the conference was designed to unite the broadest possible coalition of forces against current U.S.–Cuba policy?

The delegation traveled under the name of an umbrella group called “It Takes Roots,” an alliance of the Grassroots Global Justice Alliance, Right to the City Alliance, the Indigenous Environmental Network, and the Climate Justice Alliance. All of these organizations are closely linked to the pro-China communist group Liberation Road (until April known as Freedom Road Socialist Organization or FRSO) and LeftRoots.

The delegate’s explicit purpose was to “build deeper relationships, to affirm the principles of solidarity and grassroots internationalism, and to continue to fight for a systemic transformation against capitalism, patriarchy, colonialism and racism,” according to a Facebook post.

Before and after the conference, It Takes Roots delegates held meetings with several Cuban organizations.

First up was a meeting at the innocuously named Martin Luther King Jr. Center in Havana—one of the conference organizers. The center was founded on April 25, 1987, as “an initiative aimed at promoting values such as solidarity and justice,” according to a Climate Justice Alliance Facebook post. The center works with religious leftists “from a critical and liberalizing theology”—otherwise known as Marxist “Liberation Theology.”

Also on the visiting list were a Cuban child care center and Casa Tomada MirArte, a community project that is “using popular education and art to explore issues of race, gender and sexuality.” The group met with Norma Rita Guillard Limonta, “social psychologist, investigator of gender, sexuality, race and identity, and co-founder of Grupo Oremi, a lesbian discussion group in Cuba,” according to an It Takes Roots Facebook post.

More obviously political was a visit to the so-called Puerto Rican mission in Havana for “a conversation about the fight for the independence of the Puerto Rican people, the historical relationship between Cuba and Puerto Rico, Indigenous peoples in both countries, [and] the US embargo,” according to another Facebook post.

Cuba has long supported Puerto Rican communist groups, including violent revolutionaries, in their quest for independence from the United States.

Also on the itinerary was a meeting with the Federation of Cuban Women. A state-sponsored body, the federation was founded in the earliest days of the Cuban revolution under the leadership of Vilma Espin—who fought in the Sierra Maestras with communist leader Fidel Castro and Raul Castro. Espin married Raul Castro in 1959 and remained president of the federation until her death in 2007.

Even more disturbing was the delegation’s meeting with the Cuban Movement for Peace and Sovereignty of the Peoples (MOVPAZ) to “discuss antimilitarism efforts.”

“MOVPAZ shared insightful information and taught the delegation about its powerful work around efforts to close the Guantanamo prison, push for nuclear disarmament, fight for climate justice, and more,” It Takes Roots wrote in a Facebook post.

MOVPAZ is the Cuban affiliate of the World Peace Council—once the Soviet Union’s largest international front organization. Now run largely by Greek and Cuban communists, the Peace Council is still one the most influential communist coordinating bodies on the planet. It has affiliates all over the world, including the U.S. Peace Council, Canadian Peace Congress, and the Movimiento Mexicano por la Paz y el Desarollo, plus two “friendly” organizations, the Chinese People’s Association for Peace and Disarmament and the Russian-based International Federation for Peace and Conciliation.

Many U.S. Peace Council affiliates are active in the anti-Trump protest movement, and others work with Congress members to promote U.S. deindustrialization, disarmament, and the slashing of the U.S. military budget—long goals of Russia, China, and Cuba.

In June, It Takes Roots and Climate Justice Alliance leaders met with presidential candidate Bernie Sanders “to discuss how we can move the Just Transition to a Regenerative Economy and push for Climate Justice,” according to another post.

Clearly, It Takes Roots is an intensely political organization. It’s also obvious that members of the recent delegation are sympathetic to Cuban communist organizations working to further Havana’s agenda against the U.S. government.

This is legally problematic on multiple fronts. The delegation may have been breaking U.S. law by meeting with Cuban government bodies on clearly political matters. Are any of the delegates registered with the U.S. Justice Department under the Foreign Agents Registration Act (FARA)?

While I understand that the U.S. Justice Department has been busy protecting America from Russian collusion and Ukrainian corruption, maybe it could spare a little time to focus on Cuban collaboration?

American leftists appear to be working with Cuban organizations against U.S. government policy. Maybe the Justice Department could comment on the legality of the It Takes Roots Cuba delegation and its related actions?