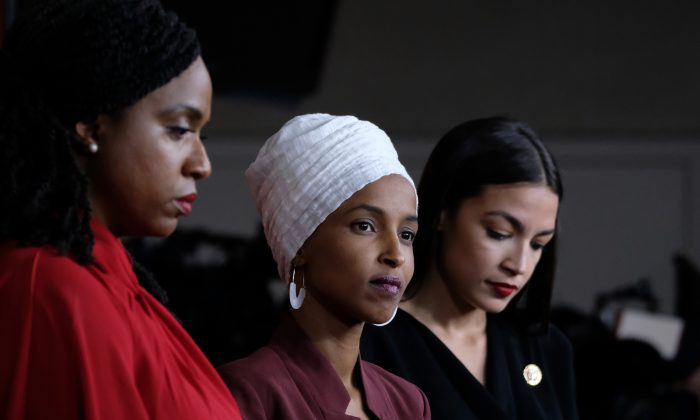 Rep. Ilhan Omar (D-Minn.) has declined to respond to President Donald Trump’s assertion that she supports the al-Qaeda terror group amid a feud between the president and progressives in the Democratic party.

Omar was asked to respond to Trump’s allegation that she is a “communist” and “pro-al-Qaeda” during a press conference at the U.S. Capitol on July 15.

“I will not dignify it with an answer because I know that every single Islamophobe, every single person who is hateful, who is driven by an ideology of ‘othering’ as this president is, rejoices in us responding to that and us defending ourselves,” Omar said.

“I do not expect every time there is a white supremacist who attacks or there is a white man who kills in a school or in a movie theater, or in a mosque, or in a synagogue, I don’t expect my white community members to respond on whether they love that person or not,” she continued.

The freshman congresswoman then said she thinks it’s “beyond time” to ask Muslims to “condemn terrorists,” before adding she would not dignify the president’s statement.

Trump Stands up to Ocasio-Cortez, Omar Because Dems Are Afraid To: Giuliani

Trump made his claims during the “Made in America” event at the White House earlier on the same day, where he defended his inflammatory Twitter posts in which he accused several “‘progressive’ Democratic Congresswomen” of being anti-semitic and anti-American.

During his comments, he directed specific criticism toward Omar, who is an immigrant from Somalia, accusing her of anti-American behavior and speech.

“I look at Omar—I don’t know, I never met her. I hear the way she talks about al-Qaeda. Al-Qaeda has killed many Americans. …

When she talked about the World Trade Center being knocked down, ‘Some people.’ You remember the famous ‘some people.’ These are people that, in my opinion, hate our country,” Trump said.

The president was referring to Omar’s appearance on the show “Belahdan” on Twin Cities PBS in 2013, during which she joked about the way her professor said “al-Qaeda” in a serious tone and described acts of terrorism as a reaction to “our involvement in other people’s affairs,” when talking about the 2013 al-Shabab attack on a Kenyan shopping mall.

“Somebody that comes from Somalia, which is a failed government, a failed state, who left Somalia, who ultimately came here and now is a congresswoman, who’s never happy. [Omar] says horrible things about Israel, hates Israel, hates Jews, hates Jews. It’s very simple,” Trump said during the event.

Later in the day, Trump reiterated his accusation toward the freshman congresswoman on Twitter.

“We will never be a Socialist or Communist Country. IF YOU ARE NOT HAPPY HERE, YOU CAN LEAVE! It is your choice, and your choice alone. This is about love for America. Certain people HATE our Country. They are anti-Israel, pro Al-Qaeda, and comment on the 9/11 attack, ‘some people did something,'” the president wrote.

….They are anti-Israel, pro Al-Qaeda, and comment on the 9/11 attack, “some people did something.” Radical Left Democrats want Open Borders, which means drugs, crime, human trafficking, and much more….

Omar, who is a member of the Foreign Affairs Committee, came under fire for remarks and actions she had previously made, as well as for her connections with several radical groups, which were also revealed earlier this year.

In April, Omar received criticism for trivializing the Sept. 11, 2001, terror attacks as “some people did something.”

The remarks were made as part of a speech at a Council on American-Islamic Relations (CAIR) fundraiser. The United Arab Emirates designated CAIR a terrorist organization in 2014.

“CAIR was founded after 9/11 because they recognized that some people did something and that all of us were starting to lose access to our civil liberties,” Omar said in the video.

Her comments prompted a backlash from several high profile people, including Rep. Dan Crenshaw (R-Texas) and prompted the New York Post to rebuke the congresswoman on the front page of its April 11 paper.

The New York Post’s cover for Thursday calls out Ilhan Omar for trivializing the 9/11 terrorist attacks as “some people did something” pic.twitter.com/xToghXSGw5

She also faced fresh condemnation in January for asking a judge in 2016 to show leniency toward a group of Minnesota men who were accused of attempting to join ISIS. Omar was a Minnesota state representative at the time.

“The best deterrent to fanaticism is a system of compassion,” she wrote in the letter obtained by Fox 9. “We must alter our attitude and approach; if we truly want to effect change, we should refocus our efforts on inclusion and rehabilitation.”

The nine men allegedly made plans, including buying fake passports, to travel to Syria to fight for the terrorist group.