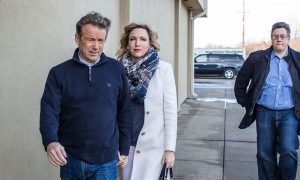 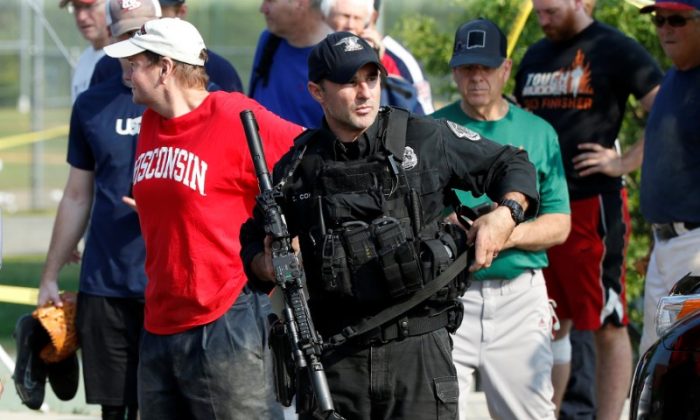 A U.S. Capitol police SWAT team officer escorts members of Congress and congressional staff from the scene after a gunman opened fire on Republican members of Congress during a baseball practice near Washington in Alexandria, Virginia, on June 14, 2017. (Joshua Roberts/REUTERS)
US News

Rep. Ilhan Omar (D-Minn.) shared an anonymous death threat that she received claiming she would most likely be killed at the Minnesota State Fair.

In this polarized political climate, violent threats and attacks against U.S. members of congress have increased.

“I hate that we live in a world where you have to be protected from fellow humans. I hated it as a child living through war and I hate it now,” Omar tweeted on Wednesday in response to a post that showed a bodyguard standing behind her as she spoke at an event in Minnesota.

“But until deranged people like this stop threatening my life and the lives of others, I have to accept the reality of having security.”

In another incident, New York man Patrick W. Carlineo Jr. has been charged after he threatened to shoot Omar in an angry call to her Washington, D.C., office in March.

Threats against members of Congress continue to grow, Capitol Police Chief Steven A. Sund said in July before the House Administration Committee.

“We continue to see the threat assessment cases that we’re opening continue to grow,” Sund said. “For fiscal year 2018, we had approximately 4,894 cases. So far, for this year, we have 2,502 cases. So we’re on par to probably break last year’s record.”

There is a long list of violent attacks against members of the Congress, some to intimidate, others to inflict physical harm, and some to kill.

A Florida man, John Kless, was arrested in April after leaving threatening messages at the offices of Rep. Eric Swalwell (D-Calif.), Sen. Cory Booker (D-NJ), and Rep. Rashida Tlaib (D-Mich.). In those messages, he cited Omar’s 9/11 comments and used slurs to describe the lawmaker.

Rep. Steve Scalise (R-La.) was nearly assassinated while at a baseball practice with other Republicans in 2017.

More recently, police arrested a man, after he left threatening voicemails for Scalise. Investigators said they found 200 rounds of ammunition and books on homemade explosives at the man’s home, along with receipts for an assault rifle and a handgun, according to court records.

“Hopefully he gets a serious sentence, because you can’t allow this kind of threats and violence against people based on their political views,” Scalise said during an interview on Fox News.

The 2017 shooting at the GOP baseball practice prompted Congress to allocate an extra $25,000 per member to pay for the increased security needs.

Arizona Congressman David Schweikert (R) has served in Congress since 2010. He said he and his family are dealing with a growing number of threats.

“We had more death threats last year in my office–even one towards my little girl–than we ever had in all of the other years combined,” Schweikert said during an interview on “Plaidcast,” a 2018 podcast hosted by Rep. Sean Duffy (R-Wis.).

Maine Republican Senator Susan Collins was threatened in relation to the confirmation of Brett Kavanaugh to the U.S. Supreme Court last year. People were not sure how she would vote but she ultimately voted in favor of Kavanaugh’s nomination.

The threats Collins faced included letters laced with white powder and a fax promising to slit her throat. Voicemails left at her office advised Collins not to vote to confirm Kavanaugh.

House Sergeant-at-Arms Paul D. Irving said at the July hearing that as members become well known in the media, his office provides higher level of support in their districts by working with the district office’s law enforcement coordinator and local law enforcement when they’re making appearances in public.

“We’ve been more proactive in reaching out to members to ensure that they all avail themselves of that service that we provide,” Irving said at the July hearing.