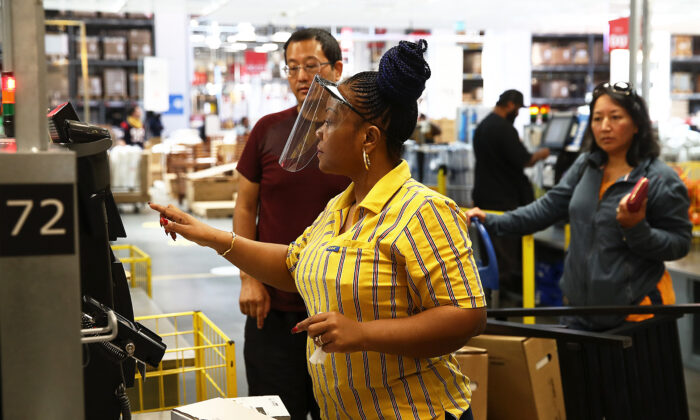 Staff at the checkout are seen in Ikea on June 01, 2020 in London, England. (Julian Finney/Getty Images)
UK

Flatpack furniture specialist Ikea has confirmed it has increased the average price of products in its UK stores by 10 percent due to rising supply chain costs.

The retailer said it has been forced to increase prices in the UK by more than the global 9% average due to “local market conditions”, including increased HGV and logistics costs.

However, analysis by the Daily Mail has found that some beds, wardrobes and desks have spiked in price by as much as 50 percent.

The issue was first raised by customers online, who noticed the sharp increases after Christmas, with some questioning why prices had not fallen as part of Boxing Day sales.

Ikea responded in a tweet: “Unfortunately, there has been a significant increase in costs across the supply chain, including in raw materials, transport and logistics. As this is still ongoing it is necessary to increase prices across many of our products.”

A spokesman said: “The effects of Covid-19 continue to evolve and impact industries all over the world.

“Since the start of the pandemic, Ikea has managed to absorb the significant cost increases experienced across the supply chain while keeping prices as low and stable as we possibly can.

“Now, like many other retailers, we have had to raise our prices to mitigate the impact on our business.

“As prices are influenced not only by the raw material prices but also by transportation, logistical costs and local market conditions, price adjustments differ from country to country.

“Whilst individual price increases vary, the average increase is 10% in the UK, in line with the global average of 9%.”

Households are facing a cost-of-living crisis in 2022, with each home set for a £1,200 increase in bills next year as energy prices soar.

Retailers have been increasing prices in response to the pandemic and supply chain issues, which have seen shipping and raw material costs rise significantly.

Inflation is now running at more than 5% and there are also concerns for jobs as the latest wave of Covid-19 hits the hospitality sector hard.

New post-Brexit rules due to come into force from January 1 could also cause delays to shipments as the amount of paperwork required increases.