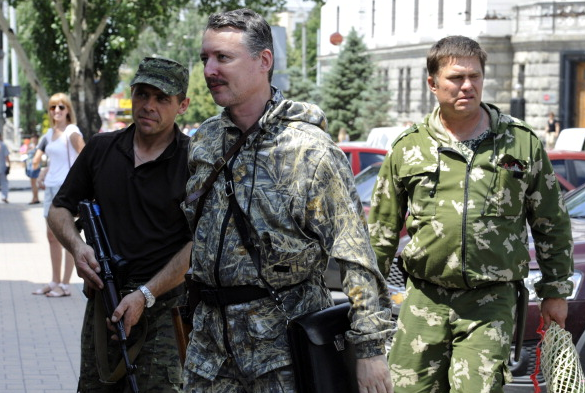 Commander and self-proclaimed minister of Defence of so the called 'Donetsk People's Republic' Igor Girkin, aka Strelok (C), walks with his bodyguards in the eastern Ukrainian city of Donetsk on July 11, 2014. (AFP Photo)
Europe

Russian-backed separatist leader Igor Girkin (who also goes by the name of Strelkov) has claimed credit for shooting down Malaysia Airlines MH17.

The plane went down over eastern Ukraine near the border of Russia. It took off from Amsterdam and was headed to Kuala Lumpur.

“The plane has just been taken down somewhere around Torez (Donetsk Oblast). It lays there behind the Progress mine. We did warn you – do not fly in ‘our sky,'” he said through his account on VK, the Russian version of Facebook, reported the Kyiv Post.

The Progress mine refers to the mining town of about 80,000 people.

“And here is the video proving another ‘bird’ falling down. The bird went down behind the slagheap, not in the residential district. So no peaceful people injured. There is also information about another plane shot,” he added.

Stelkov and his group, the Donetsk People’s Army, apparently mistook the plane for a Ukrainian army plane.

The Donetsk People’s Republic had boasted on June 29 that they took over a Ukrainian military base that had Buk ground-to-air missiles, but wouldn’t say how many, according to the Post.

The Buk missiles can travel up to 25 kilometers (15 miles), three times the altitude MH17 was flying.

Anton Gerashchenko, an advisor at Ukraine’s Ministry of Internal Affairs, says that he caught a photograph on the ground just minutes after the Buk missile was fired.

A launcher similar to the Buk missile system was seen by Associated Press journalists earlier Thursday near the eastern Ukrainian town of Snizhne, which is held by the rebels.

Other sources are reporting that the rebels are denying that they are responsible. “This could happen only if it was a fighter jet or a surface-to-air missile (that shot it down),” one rebel, who gave his name as Sergei, told Reuters, adding that the rebels don’t have weapons capable of shooting down a plane at such a height.

And Girkin himself was quoted by pro-rebel website Russkaya Vesna on Friday as saying he was told by people at the crash site that “a significant number of the bodies weren’t fresh,” adding that he was told they were drained of blood and reeked of decomposition.

Strelkov said he couldn’t confirm the information. But it’s sure to add to the intense emotions surrounding the crash, with the rebels accused of shooting down the plane.

Girkin said “Ukrainian authorities are capable of any baseness.”

He claimed that a large amount of blood serum and medications were found in the wreckage.

Strelkov, the leader of the Donetsk People’s Army, works for the Russian military agency GRU, according to BBC, citing the Ukrainian security service. Russian media says that he is a retired officer of the Russian Federal Security Service. He was born in 1970 and is a registered citizen of Moscow. He has been active in the region for decades.

His group has combat experience fighting for the Russian armed forces in Chechnya, Central Asia, Yugoslavia, Iraq, and Syria, he told Russia’s Komsomolskaya Pravda newspaper. He himself took part in conflicts in Yugoslavia.

“He is also said to be a military enthusiast who specializes in historical re-enactment and staged recreations of battles,” it reported.

A Girkin Facebook group, which appears to be filled with fans of the commander, has the following slogan: “We have defeated the nazis, we will defeat the neo-nazis.”

In it, group members post stories about Strelkov’s recent success in Ukraine.

Ukrainian President Petro Poroshenko called the downing an act of terrorism and called for an international investigation into the crash. He insisted that his forces did not shoot down the plane.

People walk amongst the debris at the crash site of a passenger plane near the village of Hrabove, Ukraine, Thursday, July 17, 2014. Ukraine said a passenger plane carrying 295 people was shot down Thursday as it flew over the country. (AP Photo/Dmitry Lovetsky)

A man gestures at a crash site of a passenger plane near the village of Hrabove, Ukraine, Thursday, July 17, 2014. (AP Photo/Dmitry Lovetsky)

Wreckage of Malaysia Airlines Flight MH17 after it was shot down near Shaktarsk, Ukraine. (AFP Photo)

A man covers a body with a plastic sheet near the site of a crashed Malaysia Airlines passenger plane near the village of Rozsypne, Ukraine, eastern Ukraine Friday, July 18, 2014. Rescue workers, policemen and even off-duty coal miners were combing a sprawling area in eastern Ukraine near the Russian border where the Malaysian plane ended up in burning pieces Thursday, killing all 298 aboard. (AP Photo/Dmitry Lovetsky)

Girkin said, also on Friday, that eight of the 12 black boxes were found in scattered wreckage.

But separatist leader Aleksandr Borodai says “no black boxes have been found … We hope that experts will track them down and create a picture of what has happened.”

Meanwhile, U.S. Ambassador Samantha Power told an emergency meeting of the U.N. Security Council on Friday that the United States cannot rule out that Russia helped in the launch of the surface-to-air missile that shot down a Malaysian Airlines jet over eastern Ukraine, killing all 298 people on board.

Power said the U.S. believes the plane was likely downed by an SA-11 missile fired from an area in eastern Ukraine controlled by pro-Russian separatists. She said Russia has provided SA-11s and other heavy weapons to the separatists.

The Malaysian jet was flying at a cruising altitude of 33,000 feet (10,000 meters) from Amsterdam to Kuala Lumpur on an established flight corridor when it was shot down Thursday, she said.

Power said that early Thursday a Western reporter reported an SA-11 system in separatist-controlled territory near Snizhne, “and separatists were spotted hours before the incident with an SA-11 SAM system close to the site where the plane came down.”

“Because of the technical complexity of the SA-11, it is unlikely that the separatists could effectively operate the system without assistance from knowledgeable personnel. Thus, we cannot rule out technical assistance from Russian personnel in operating the systems,” she said.

Power said Ukraine also has SA-11 missiles but the United States is not aware of any in the area where the plane was shot down.

She said the downing of the Malaysian airlines jet also follows a pattern of attacks on aircraft by the separatists in June and very recently on Monday and Wednesday.

“If indeed Russian-backed separatists were behind this attack on a civilian airliner, they and their backers would have good reason to cover up evidence of their crime,” Power told the council. “Thus it is extremely important than an investigation be commenced immediately.”

Power called for a cease-fire by Russia, pro-Russian separatists and Ukraine so investigators can immediately get to the site.

Russia’s U.N. Ambassador Vitaly Churkin did not respond to the U.S. allegations but called for an international commission to investigate the crash.

He asked why Ukraine allowed civilian aircraft to fly over an area where military clashes and airstrikes were taking place, and where anti-aircraft systems were operating, and called on investigators to also determine whether Ukraine met its international obligation to ensure the safety of the flying public and “prevent disasters from occurring.”

A photo showing the footprint of the Buk missile that allegedly took down Malaysia Airlines Flight MH17. (Anton Gerashchenko)

In this Nov. 15, 2012 photo, a Malaysia Airlines Boeing 777-200 takes off from Los Angeles International Airport in Los Angeles. The plane, with the tail number 9M-MRD, is the same aircraft that was heading from Amsterdam to Kuala Lumpur on Thursday, July 17, 2014 when it was shot down near the Ukraine Russia border, according to Anton Gerashenko, an adviser to Ukraine’s interior minister. (AP Photo/JoePriesAviation.net)

In this October 2008 photo provided by AMC Amsterdam on Friday, July 18, 2014, former president of the International AIDS Society Joep Lange is seen. A large number of world-renowned AIDS researchers and activists heading to an international AIDS conference in Australia were on board a Malaysian jetliner that was shot down over Ukraine, officials said Friday, as news of their deaths sparked an outpouring of grief across the global scientific community. Among them was Joep Lange, a well-known researcher from the Netherlands (AP Photo/Peter Lowie/AMC)

“Today, Kiev declared a full closure of the airspace in the conducting of the so-called anti-terrorist operation,” Churkin said. “Why couldn’t this have been done earlier, not later when (there were) hundreds of victims?”

Ukraine’s U.N. Ambassador Yuriy Sergeyev reiterated that the downing of the Malaysian airliner would not have happened if Russia did not provide sophisticated anti-aircraft systems to the rebels.

He said that intercepted telephone conversations between rebel leaders and a Russian military intelligence colonel “confirms the terrorists are standing behind this crime,” stressing that immediately after the crash, a rebel military leader boasted in social media of shooting down what he thought was a Ukrainian jet.

Sergeyev said communications and intercepts, photos and videos indicate that the rebels have at least two SA-11 missile systems, also known as Buk. He added that detained “terrorists,” including two Russian citizens who were going to join the rebels, confessed that the Buk system arrived from Russia.

The entire Security Council called for “a full, thorough and independent international investigation, in accordance with international civil aviation guidelines, and for appropriate accountability.” It stressed the need for “immediate access by investigators to the crash site to determine the cause of the incident.”

At the start of Friday’s emergency meeting, all diplomats in the crowded council chamber rose to their feet and bowed their heads in silent tribute to those who died.

Ambassadors from all countries with passengers on the flight — Netherlands, Malaysia, Australia, Indonesia, United Kingdom, Germany, Belgium, Philippines, Vietnam, Canada, New Zealand and the United States — all spoke, demanding an independent investigation and calling for the perpetrators to be brought to justice.

U.N. Secretary-General Ban Ki-moon offered the “full cooperation” of the U.N. in an international investigation, saying it must be “full and transparent” and anyone responsible must be brought to justice, U.N. deputy spokesman Farhan Haq said. Ban said the International Civil Aviation Organization has offered to put together an international team.

U.N. political chief Jeffrey Feltman, who briefed the council, expressed hope for “a serious and sustained effort to end the fighting and concentrate positively on Ukraine’s future.” He said Ban has asked him to return to Kiev and Moscow in the coming days to promote peace efforts.

The Kremlin said Russian President Vladimir Putin “informed the U.S. president of the report from air traffic controllers that the Malaysian plane had crashed on Ukrainian territory” without giving further details about their call. The White House confirmed the call, with President Barack Obama calling the crash a “terrible tragedy.” Britain has asked for an emergency meeting of the U.N. Security Council on Ukraine.