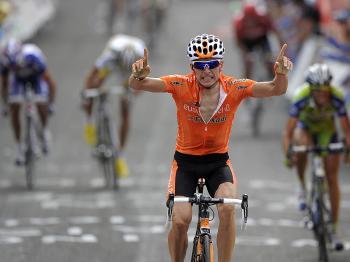 James Fish
alias for Chris J
View profile
Follow
biggersmaller
Print
Euskatel-Euskadi rider Igor Anton waited until the peloton leaders had spent themselves riding down an attack, then made his move, snatching victory away from the leading Liquigas and Katusha riders on the brutal uphill finish to Stage Four of the 2010 Vuelta a Espana.

“I did the right thing by coming here one and half month ago to reconnoitre the end of today’s stage,” Anton told CyclingNews.com.

“I remembered the finale of the Flèche-Wallonne where I made the mistake of attacking too early this year. It was a useful defeat because I’ve learned what not to do in these circumstances.

“I didn’t panic when I saw Uran and then Rodriguez attack. I calculated my effort pretty well, although I was afraid of Nibali passing me at the very end.”

Four riders—Guillaume Bonnafond (AG2R), Sergio Carrasco (Andalucia-CajaSur), Dario Cataldo (Quick Step) and Dominik Roels (Milram)—tried an attack in the first 20 km, and stayed away until the final climb of the day.

Stage Four had three categorized climbs, a pair of twos and a three, but that final Cat Three climb split the peloton into many pieces.

The lead group of about 20 riders hit the final two kilometers, which climbed sharply—very, very sharply, as much as a 24 percent gradient in places—and Caisse d’Epargne’s Rigoberto Uran attacked, dropping the whole field. But the climb was too steep for too long after climbing all day in the heat, and Uran slowed in the final 900 meters.

600 meters to go, the peloton caught him. When it did Igor Anton looked at Liquigas rider Vincenzo Nibali, riding next to him at the front, then attacked, shooting away as if he were just starting the race.

Anton had scouted the route and planned when to attack; he left the rest behind.

Anton seemed to be cruising home easily, until the final 100 meters when he started wearing out, and Vicenzo Nibali and Joaquin Rodriguez attacked. Anton managed to hold on by a few meters, and took the win.