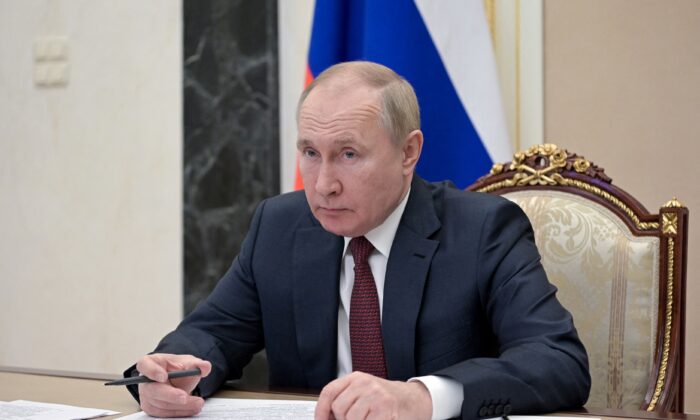 Russian President Vladimir Putin on Tuesday delivered his first remarks on his country’s standoff with the West over Ukraine by claiming the United States and NATO have ignored Moscow’s top security demands.

“Russia is carefully analyzing the U.S. and NATO written responses, but it is already clear that Russia’s fundamental concerns have been ignored,” Putin said in Moscow Tuesday alongside Hungarian Prime Minister Viktor Orban. “NATO refers to the right of countries to choose freely, but you can not strengthen someone’s security at the expense of others.”

Putin was responding to letters that were sent to his government by NATO leadership and Secretary of State Antony Blinken in late January over the massive troop buildup of Russian soldiers along the Ukrainian border.

U.S. officials and legacy news outlets, for weeks now, have asserted that Moscow is plotting an invasion—something Russia has denied. Talks between Russia and the West have so far failed to yield progress.

However, Putin and Kremlin officials “have not seen adequate consideration of our three key requirements concerning the prevention of NATO expansion, the refusal to deploy strike weapons systems near the Russian borders, as well as the return of the military infrastructure of the bloc in Europe to the state of 1997, when the Russia-NATO founding act was signed,” the Russian leader continued to say, adding that his proposals were “ignored” by Western powers.

Putin further said that the United States and NATO are using the Ukraine situation to contain Russia. Several U.S. senators suggested over the weekend they were planning to issue significant sanctions against top Russian officials should Moscow decide to invade Ukraine.

“I hope dialogue on Ukraine will continue,” Putin also said.

In 2014, Russia annexed the Crimean Peninsula and also began funding pro-Russian separatists in the eastern Ukrainian region known as the Donbas. But in recent months, Moscow has been deploying significant numbers of soldiers, military hardware, and logistical support units near Ukraine’s border and also in Belarus, a former Soviet bloc country that retains close ties with the Kremlin.

On Tuesday, U.S. State Department spokesman Ned Price noted his agency and Blinken recently had a phone call with Russian counterpart Sergei Lavrov that “further reiterated the U.S. commitment to Ukraine’s sovereignty and territorial integrity, as well as the right of all countries to determine their own foreign policy and alliances.”

And Blinken also “urged immediate Russian de-escalation and the withdrawal of troops and equipment from Ukraine’s borders,” Price said, adding that a further Russian incursion of Ukraine would be met with “swift and severe consequence,” without elaborating.

Leaders from the Netherlands, Turkey, and Canada are in Ukraine or planning to visit in the coming days.

“We continue to engage in nonstop diplomacy and to de-escalate tensions and attempt like the devil to improve security for our allies and partners and for all of Europe, for that matter,” President Joe Biden said to reporters on Monday.