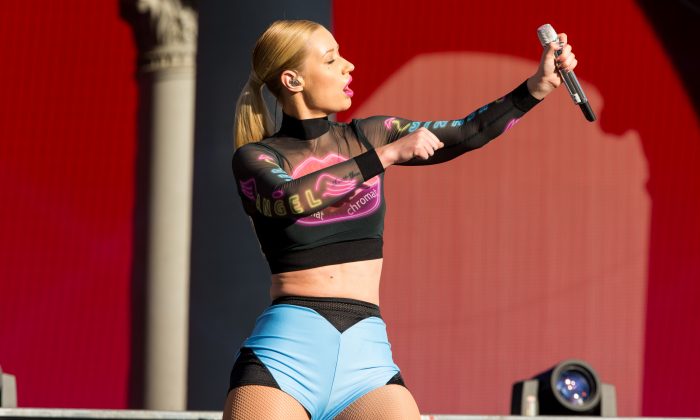 Iggy Azalea performs on stage during the Made In America Festival at Grand Park on Saturday, August 30, 2014, in Los Angeles, Calif. (Photo by Paul A. Hebert/Invision/AP)
Entertainment

There’s been accusations that singer-rapper Iggy Azalea is a racist.

A recent article from a writer at Thought Catalog does exactly that, saying, “In fact, you were whiter than a Romney family gathering, and as if that wasn’t bad enough, you turned out to be furthest thing from black one can be, namely Australian (which is basically synonymous with being racist).”

However, a couple of days ago, rapper TI came to Azalea’s defense and said the allegations are unfounded.

“That pisses me off,” he told HipHopDX. “Simply because they don’t have any real substantial grounds. ‘I don’t like them.’ Why? ‘Just ’cause.’ What you mean just ’cause? Since when do you get the right to judge people? Who died and made you the emperor of Egypt? That kind of [expletive] and then the things that they accuse her of, like the racist stuff.”

He added: “That’s not even her. That’s not even in her. Me knowing her, knowing where she comes from—for real, the whole racist thing, that’s American—we forget, she’s not American. So the whole Black, white, color divided thing, it isn’t a part of her DNA like it is here in America. It’s just ignorant to me. In this day and age, to be a race of people who are demanding equality and speaking out on injustices and wanting to be treating fairly, to stand up and do the exact same thing in opposite to someone unwarranted for no reason, it’s hypocritical. I’ma ride with her. So, ya’ll go ahead. Anybody got a problem with it just know, it gon’ be one ’cause I’m coming.”

The racism allegations apparently were started by rapper Azealia Banks.

In an interview with the Guardian, Azalea said that “getting the word racist put on me sucked.”