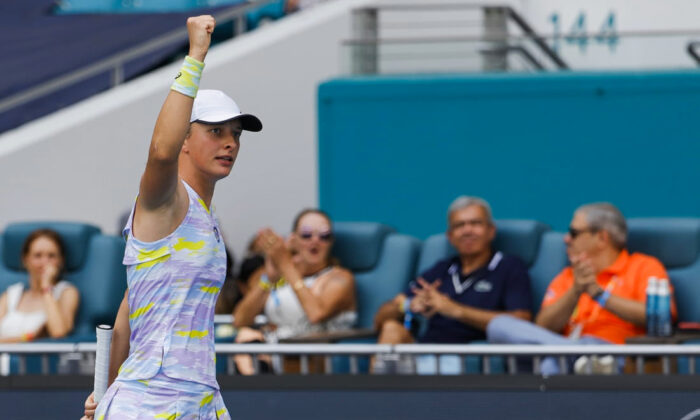 Iga Swiatek of Poland reacts after a breaking serve against Naomi Osaka of Japan (not pictured) in the women's singles final in the Miami Open at Hard Rock Stadium in Miami Gardens, Fla., on April 2, 2022. (Geoff Burke/USA TODAY Sports via Field Level Media)
Tennis

The No. 2 seed—and soon to be World No. 1—won her 17th consecutive match and third straight title.

Swiatek converted four of her 10 break chances and never faced a break point in the one-hour, 17-minute match. Only one game in the second set went to deuce.

“I’m pretty glad that we could play this match and I think it’s the start of a great rivalry,” Swiatek said after her second career matchup against Osaka, and she told Osaka: “You’re really an inspiration and this sport is better with you, so keep going.”

Osaka, a four-time Grand Slam winner and former World No. 1, was vying for her first trophy since the 2021 Australian Open. She served seven aces, but Swiatek won 20 of the 30 points on Osaka’s second serve.

“I know I haven’t been in this position for a little while,” Osaka told the crowd after playing in her first final since the 2021 Australian Open. “The outcome wasn’t what you wanted, but hopefully I can keep working hard and be in a position to do this again soon.”

“I feel pretty privileged that I can be amongst those players, because I wouldn’t even dream of it a few years ago,” Swiatek said of joining the club. “I knew it’s going to be tough playing these two tournaments in a row. I realized at the end it’s just another match and I took it step by step.”

Swiatek will be the new No. 1 in the rankings on Monday, replacing the recently retired Ashleigh Barty of Australia.

Osaka won the first meeting between the two in straight sets in the round of 16 at Toronto in 2019.