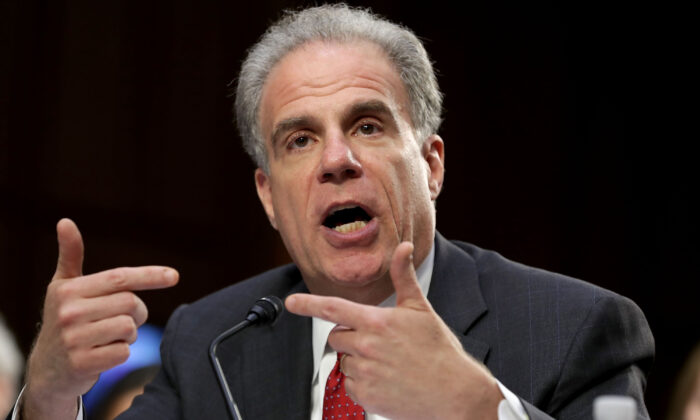 IG Report Clears Up Some, Obfuscates Other Parts of Russia Probe Origin

There are still outstanding questions about how the FBI opened a sprawling counterintelligence investigation in the summer of 2016 on the campaign of then-candidate Donald Trump.

A Dec. 9 report on the Justice Department’s Inspector General’s (IG) review of the probe filled in some of the blank spaces, but it muddled some parts as well.

As the report states (pdf), the investigation was based on a tip from a “friendly foreign government” about a discussion that officials from that government had in May 2016 with then-Trump campaign aide George Papadopoulos.

When discussing what the tip actually was, the report, for the first time, quotes from a source—whose identity is redacted—that appears to be a statement by the foreign officials.

The source “suggested the Trump team had received some kind of suggestion from Russia that it could assist this process with the anonymous release of information during the campaign that would be damaging to Mrs. [former Secretary of State Hillary] Clinton (and President [Barack] Obama). It was unclear whether he or the Russians were referring to material acquired publicly of [sic] through other means. It was also unclear how Mr. Trump’s team reacted to the offer. We note the Trump team’s reaction could, in the end, have little bearing of what Russia decides to do, with or without Mr. Trump’s cooperation.”

“The Inspector General’s report now makes clear that the FBI launched an intrusive investigation of a U.S. presidential campaign on the thinnest of suspicions that, in my view, were insufficient to justify the steps taken,” Attorney General William Barr said in a Dec. 9 statement.

Beyond the excerpt, however, the report obfuscates a number of other details about what the probe was based on.

It’s been publicly known that the “friendly foreign government” was Australia and that the officials talking to Papadopoulos were then-High Commissioner Alexander Downer and his aide Erika Thompson, who invited Papadopoulos for a chat at a London bar.

Then-FBI Director James Comey testified to Congress about the probe’s origin, saying, “We received information from an allied nation about the conversations their ambassador had in England with George Papadopoulos.”

Downer spoke about his discussion with Papadopoulos multiple times on television, describing it in significant detail. Yet, he never mentioned anything about a “suggestion” that Russians reached out to the campaign with an offer of assistance.

Papadopoulos has also spoken extensively on the matter—including to the FBI. He acknowledged he was told in April 2016 by Maltese academic Joseph Mifsud that the Russians had thousands of Clinton’s emails. But he never mentioned any offer from the Russians.

In another obfuscation, the IG report never specifies when the Papadopoulos–Downer meeting took place. It consistently says it took place in May 2016, but always stops short of giving an actual date.

That may not be a coincidence.

Comey was clear the Australian tip was about a discussion Papadopoulos had with an “ambassador”—a title equivalent to what Australia calls a high commissioner. Comey even said he gave the same account in his book, which was cleared by the FBI before publishing.

Canberra has confirmed that Downer met with Papadopoulos on May 10.

Yet, the final report of then-special counsel Robert Mueller, who took over the Russia probe in 2017, claims that the probe was predicated on a tip about a conversation that Papadopoulos had with “a representative of a foreign government” on May 6, 2016. There’s no evidence that Papadopoulos met with any ambassador on May 6.

Mueller eventually concluded that the investigation didn’t establish that any Americans colluded with the Russian election meddling.

Omitting the date carries special significance, because if the IG report confirmed that the original tip that prompted the Russia probe pertained to the Downer–Papadopoulos meeting on May 10, it would undermine a notion that Papadopoulos had some exclusive information about what the Russians may have on Clinton.

On May 9, 2016, retired Judge Andrew Napolitano went on Fox News’ “The Kelly File” and aired an unsubstantiated claim that “there’s a debate going on in the Kremlin … about whether they should release the 20,000 of Mrs. Clinton’s emails that they have hacked into.”

On May 10, such information was hardly exclusive.

Papadopoulos alleged that Mifsud shared the rumor about Russians and Clinton emails as a part of an operation to entrap the Trump campaign. The IG report states that there was no sign that Mifsud was an FBI informant; it doesn’t speak to Mifsud’s involvement with any other agencies.

Mifsud did have some Russian contacts, but most of his connections and affiliations were in the West, particularly in the security, intelligence, and counterterrorism circles in London, Rome, and elsewhere. He told the FBI he never spoke with Papadopoulos about any dirt on Clinton possessed by Moscow.

In late September, Barr and Secretary of State Mike Pompeo reportedly traveled to Italy, where they met with security officials and, among other things, inquired about Mifsud.

Mifsud’s phones were handed over to U.S. Attorney John Durham, who has been tasked by Barr to review whether the Russia probe was properly conducted and predicated. Durham has reportedly interviewed Downer as well.

The review has reportedly turned into a criminal investigation.