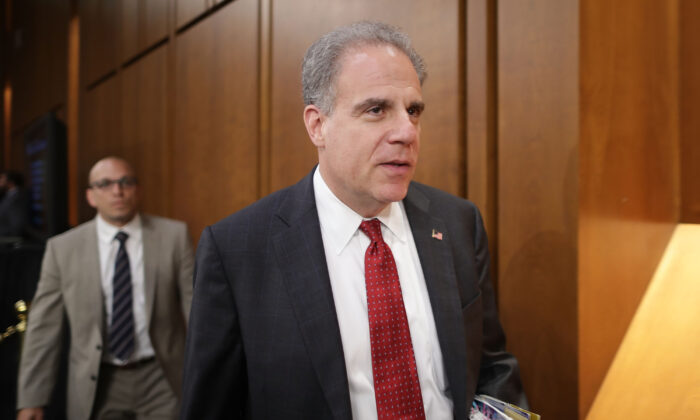 His comment came after he accused top officials in the FBI of mishandling a flawed effort via a Foreign Intelligence Surveillance Act (FISA) court to get authority to surveil Carter Page, an American foreign policy adviser who worked on President Donald Trump’s election effort.

Horowitz was asked by Senate Judiciary Chairman Lindsey Graham (R-S.C.) about whether there was a point when surveilling Page became unlawful. Horowitz first said that his report was sent to the courts to make a decision on whether charges should be filed against anyone at the FBI.

“If you don’t have a legal foundation to surveil somebody and you keep doing it, is that bad?” Graham asked Horowitz.

There were “significant questions” “raised” about the “reliability of the Steele reporting that was used in the Carter Page FISA applications.”

He added that “the FISA applications relied entirely on information from the Steele reporting to support the allegation that Page was coordinating with the Russian government on 2016 U.S. presidential election activities.”

A number of FBI officials directly involved in preparing and signing the FISA warrants have all either left or been fired from the bureau, including Director James Comey, Deputy Director Andrew McCabe, and Deputy Assistant Director Peter Strzok.

In his statement to the Judiciary Committee, Horowitz said his office is “deeply concerned” that numerous “basic and fundamental errors were made by three separate, hand-picked investigative teams on one of the most sensitive FBI investigations.”

And it came “after the matter had been briefed to the highest levels within the FBI; even though the information sought through use of FISA authority related so closely to an ongoing presidential campaign; and even though those involved with the investigation knew that their actions were likely to be subjected to close scrutiny,” Horowitz said.

Horowitz concluded that the errors amounted to a failure that implicated the chain of command at the FBI responsible for handling the FISA applications, including senior officials.

“We believe this circumstance reflects a failure not just by those who prepared the FISA applications, but also by the managers and supervisors in the Crossfire Hurricane chain of command, including FBI senior officials who were briefed as the investigation progressed,” Horowitz testified. “Especially in the FBl’s most sensitive and high-priority matters, and especially when seeking court permission to use an intrusive tool such as a FISA order, it is incumbent upon the entire chain of command, including senior officials, to take the necessary steps to ensure that they are sufficiently familiar with the facts and circumstances supporting and potentially undermining a FISA application in order to provide effective oversight consistent with their level of supervisory responsibility.”