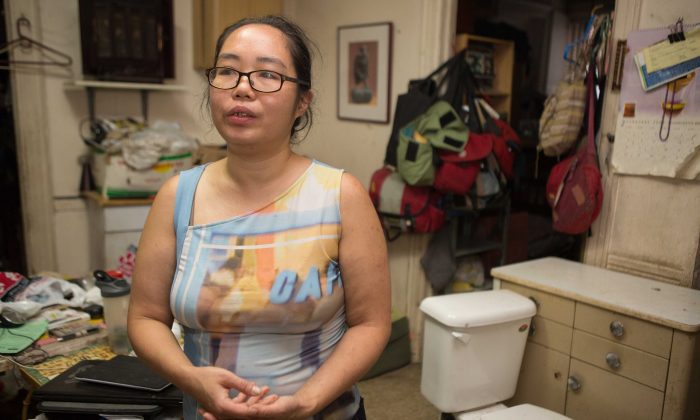 Betty Eng, a radio engineer, is left to live in drastic conditions after she rejected her landlord's buyout offers for her rent-stabilized apartment. (Benjamin Chasteen/Epoch Times)
New York

If You Live in a Rent Stabilized Apartment, You Need to Know About This New Law

NEW YORK—It looked as if nothing in Betty Eng’s Chinatown apartment was working quite the way it should be. A part of her ceiling was crumbling. Her kitchen sink pipe was disconnected. And her toilet was in her living room.

Eng, a 44-year-old radio engineer, recalled how workmen came into her apartment on July 19, mumbling something about finding the source of a leak in the building. She was feeding her 4-week-old kitten when they detached her toilet from the bathroom and set it in the living room. She recalled a workman uncharacteristically asking,”Would you like to accept a buyout?”

Her kitten is nearly 3 months old now, and the workmen have not yet returned to repair her ramshackle apartment.

(Her landlord, James Fong, denied ever offering Eng a buyout. “I am against buyouts because it is blackmail,” he said. However, he declined to comment on the condition of her apartment.)

There have been worse case scenarios, as speculative landlords have been purchasing buildings in poor neighborhoods that are on the verge of gentrifying and evicting rent stabilized tenants in order to charge higher rent.

If a tenant rejects buyout offers, the condition of the apartment conveniently becomes unlivable.

Walter Chow, a 65-year-old retired emergency medical technician for FDNY, rejected three buyout offers from his landlord. For refusing to accept a $5,000 one-time payment, he lived in his rent-stabilized apartment in East Flatbush for six years without a working toilet or sink. He urinated in a bucket. Chow couldn’t afford a lawyer, lost a housing court case, and was finally illegally evicted from his apartment in July. He’s now renting elsewhere after being briefly homeless.

“It is common—it is,” said Brandon Kielbasa, a tenant organizer with the Cooper Square Committee, when asked about how often he heard of situations like Eng’s and Chow’s.

Eng and Chow are two of the many rent-stabilized tenants who receive buyouts offers so low they likely wouldn’t even cover a deposit on the next apartment. If rent-stabilized tenants reject buyout offers, they receive harassments that vary from refusal to make repairs, frivolous lawsuits, immigration threats, to incessant building construction without proper dust mitigation.

Some of these relocators have been in the business for more than 10 years, according to a report from New York Attorney General Eric Schneiderman. One of the most infamous companies is Misidor LLC, whose websites boasted that from 2013 to May 2014 it had “relocated hundreds of tenants” in New York City alone, according to the attorney general.

On Sept. 3, Mayor de Blasio signed a comprehensive tenant harassment bill into law. Some tenant organizers are calling this legislation a game changer. It will require landlords to inform tenants of their right to reject a buyout offer and remain in their apartments. The landlord must also inform tenants that they have the right to seek an attorney for legal assistance.

This legislation comes as a part of a string of government efforts to hold landlords and relocators accountable. Michel Pimienta, a relocator for Misidor, was fined $40,000 and had his license revoked last October; Brooklyn landlord Daniel Melamed was charged with endangering the health and safety of his rent regulated tenants this July.

Most importantly, the new bill requires landlords or relocators to submit their buyout offers in the writing, and they are not allowed to contact a tenant regarding a buyout more than once every 180 days. This is significant because relocators often do their work verbally, which makes it difficult to prove transgressions in housing court.

“It’s a step in the right direction,” Kielbasa said.

Although this recent legislation is the strongest tenant protection bill yet, some tenant organizers and rent-stabilized tenants question how the legislation will be enforced.

Kenny Mei, a systems analyst who lives in Chinatown, is worried the bill won’t make a significant difference.

“He called me from five, six different numbers,” said Mei, adding that since he didn’t know he was answering Pimienta’s call, he couldn’t record the conversation to use as evidence in court.

Although Pimienta lost his license in the fall, Mei received a call and text from him even after that.

“The bill does make improvements,” Mei said. “But [relocators] will find a way around it.”

Relocators and landlords often take advantage of the vulnerability of non-English speakers.

Miguel Contreras, a 45-year-old cook who only speaks Spanish, had been living in his East Village apartment since 1993.

In February, Contreras’s landlord called him more than 20 times—sometimes as late as 11 p.m., and once at 1 in the morning. He said his landlord threatened to evict him.

The landlord offered $48,000 and six months of free rent. Contreras, thinking that he was going to get evicted anyway, accepted the buyout offer.

Little did Contreras know, he was not actually going to get evicted.

“It wasn’t true,” said Ariana Marmora, Contreras’s attorney who works with MFY Legal Services. “They had no legal right to evict him.”

Marmora is currently working on getting Contreras’s apartment back.

There are agencies that are looking to help tenants get their rent-stabilized apartments back as well.

In 2012, Gov. Cuomo created a Tenant Protection Unit (TPU) that conducts audits and investigations. TPU has since helped return more than 40,000 units to regulation that were unlawfully deregulated.

“We applaud the numerous members of City Council who have expanded ‘tenant harassment’ to include buyout offers accompanied with heinous tactics,” Poon said.

But, he added, 180 days is too short of a term. “Especially with our non-English speaking residents, writing a letter in English is hard enough, but to do it every 180 days is just unreasonable,” Wai said.

Kielbasa advises people to immediately alert their neighbors if they hear there’s a relocator in the building.

“I think it’s really important for tenants to confront these guys and do it collectively, talk to your neighbors,” said Kielbasa. “Record and take detailed notes of interactions with these folks.”

“I’m hopeful we’ll get additional protection as time goes on,” Kielbasa added. “If we find tenants are coming back to us to say this isn’t enough, we’re going to go back to City Council.”

Milene Fernandez contributed to this report.

If tenants believe they have been the subject of harassment, call the Office of Rent Administration or the Tenant Protection Unit at 718-739-6400.

The article was updated to reflect that Mayor de Blasio signed the tenant protection bill into law on Sept. 3.

CORRECTION: An earlier version of this article incorrectly named Ariana Marmora’s place of occupation. She works with MFY Legal Services.